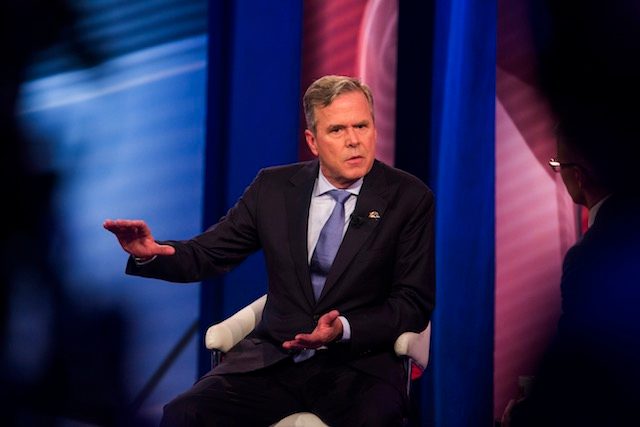 Facebook Twitter Copy URL
Copied
(3rd UPDATE) Bush: 'I'm proud of the campaign that we have run to unify our country'

COLUMBIA, South Carolina, USA (3rd UPDATE) – In the end, a famous name, political pedigree and deep-pocketed donors were not enough to rescue the lackluster presidential campaign of Jeb Bush.

Bush withdrew from the presidential race Saturday, February 20 (Sunday, February 21 in Manila) after another humiliating primary defeat, this time in South Carolina.

“Tonight, I am suspending my campaign,” an emotional Bush, who at times appeared on the verge of tears, said after the disappointing result.

“I’m proud of the campaign that we have run to unify our country.”

The former Florida governor – son of one president and brother of another – started his campaign as the odds-on favorite to win the Republican presidential nomination, backed by a prodigious political brain trust and millions of dollars in donations from private and corporate supporters.

Although the 62-year-old Bush led some opinion some polls very early in the campaign, his support had dwindled by Saturday to single digits nationally, and his White House aspirations were on life support.

The coup de grace came after he earned less than eight percent of the vote in the primary in South Carolina, a state where his family had always made strong primary showings.

Donald Trump was the big winner in South Carolina – a particularly bitter pill to swallow for Bush, who throughout the campaign was bullied and demeaned by the billionaire businessman.

Bush’s campaign logo sported a jaunty exclamation mark after his first name – Jeb! – a jarring juxtaposition to the candidate himself, who came across as plodding and unexciting.

Bush and his Right to Rise super PAC – vastly outraised his competitors, garnering some $118 million but the money – largely spent on television ads – failed to help generate excitement about his campaign.

A super PAC is an independent body that can raise unlimited amounts of money to support a candidate, but cannot coordinate their efforts with the party or candidate, or make direct campaign contributions.

Bush was mercilessly pilloried by Trump, who lampooned him as “low energy” and lacking the requisite resolve and the fire-in-the-belly to lead the nation – a catchphrase that stuck in the popular imagination.

In recent weeks, Jeb’s famous mother, former first lady Barbara Bush, went out on the campaign trail for him, as did his brother, two-term former president George W. Bush.

Trump only intensified his barbs, lampooning Bush as a mama’s boy dependent on riding his family coattails for his past success.

George W. Bush had consoling words after his brother’s humbling exit from the race for the White House.

“Tonight I talked to my brother and congratulated him on his campaign for the presidency. I told Jeb how proud I am of him and his staff for running a campaign that looked to the future, presented serious policy proposals, and elevated the tone of the race,” he said in a statement.

For some, the prospect of yet another Bush presidency – particularly when weighed against the possibility that Hillary Clinton, the wife of a former president, could become the Democratic nominee – was more than some voters were willing to stomach.

At debates, Bush seemed tongue-tied; on the campaign trail, he was flat-footed. He had promised to campaign “joyfully,” but seemed tepid and at times even testy as he traveled the country.

Some experts said however that the genteel, patrician, soft-spoken Bush simply failed to connect with the spirit of the times and an irascible electorate – especially with white, lower middle class voters disgruntled after seven years under Democratic President Barack Obama.

As his campaign foundered in recent weeks, it became increasingly clear that Bush would not follow his father and brother in the White House, after Trump and Senators Ted Cruz and Marco Rubio vaulted him in the polls.

He failed to get a coveted endorsement from the popular governor of South Carolina, Nikki Haley, who instead backed his former protege Rubio.

Rubio, a first-term senator from Florida, was in second place over Cruz in South Carolina and behind Trump. Bush, the mentor, finished in an unimpressive fourth place. – Michael Mathes, with Stephanie Griffith in Washington, AFP/Rappler.com