Believed to be extinct, environmentalists make first contact in decades with rhino in Borneo 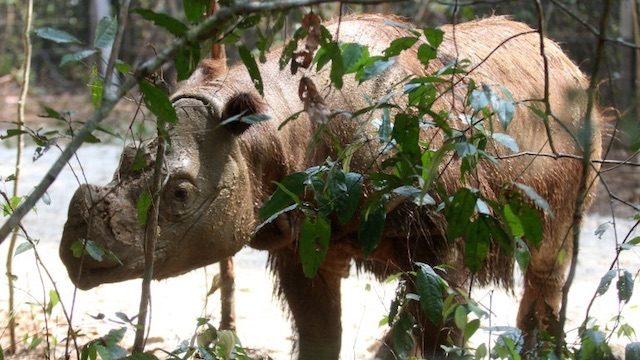 JAKARTA, Indonesia – Environmentalists have made physical contact with a Sumatran rhino on the Indonesian part of Borneo island for the first time in over 40 years, the WWF said Wednesday, March 23, hailing a “major conservation success”.

The critically endangered rhino was caught in a pit trap this month in East Kalimantan province in an area close to mining operations and plantations, where the WWF said it was struggling to survive.

The female animal, thought to be aged around 6, is now in a temporary enclosure and will later be airlifted by helicopter to a safer habitat on Borneo, Efransjah, head of environmental group WWF-Indonesia, told AFP.

The contact with the rhino comes after environmentalists discovered in 2013 that the Sumatran rhino was not extinct on Indonesian Borneo – as had long been thought – when hidden cameras captured images of the animals.

Borneo is the world’s 3rd-largest island and is shared between Indonesia, Malaysia and Brunei.

Efransjah, who like many Indonesians goes by one name, hailed the capture of the rhino on March 12 as “an exciting discovery and a major conservation success”.

“We now have proof that a species once thought extinct in Kalimantan (Indonesian Borneo) still roams the forests, and we will now strengthen our efforts to protect this extraordinary species.”

The capture of the rhino was a joint effort between environment ministry officials, the WWF and the Rhino Foundation of Indonesia.

The Sumatran rhino is the smallest of the living rhinos. They are the only Asian rhino with two horns, and are covered with long hair.

There were once Sumatran rhinos all over Borneo but their numbers have dwindled dramatically, with poaching, and expansion of mining and plantation operations considered the main reasons for the decline.

The International Union for Conservation of Nature classifies the Sumatran rhino as critically endangered. The WWF estimates there are fewer than 100 remaining in the wild.

There are only a few substantial populations still in existence, most of them on Indonesia’s main western island of Sumatra.

The wild population of Sumatran rhinos on the Malaysian part of Borneo was declared extinct last year, according to the WWF. – Rappler.com