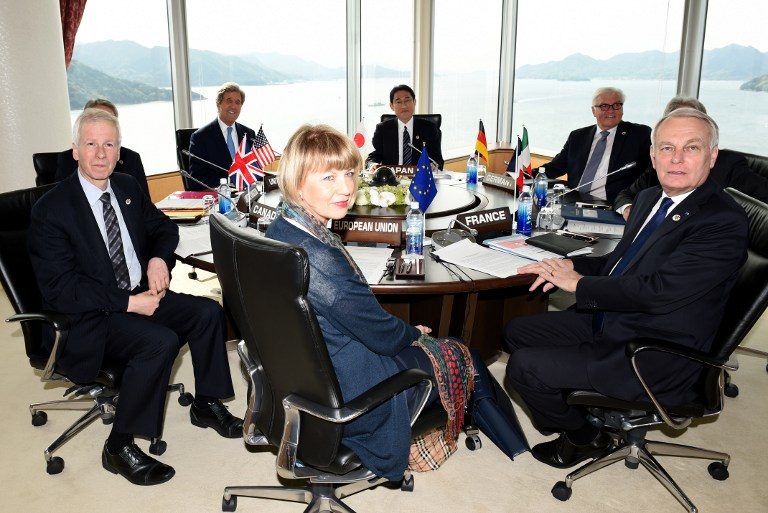 HIROSHIMA, Japan – Group of Seven foreign ministers on Monday, April 11, expressed concern about maritime disputes in Asia, as worries grow in the region over China’s territorial and military ambitions.

Beijing lays claim to almost all of the South China Sea despite conflicting partial claims from Brunei, Malaysia, Vietnam, Taiwan, and the Philippines.

It has constructed artificial islands in the area in recent months as it asserts its sovereignty.

Japan, meanwhile, has its own dispute with China in the East China Sea over uninhabited islands that it administers but that are also claimed by Beijing.

“We are concerned about the situation in the East and South China Seas, and emphasize the fundamental importance of peaceful management and settlement of disputes,” the G7 ministers said in a statement after their two-day meeting in the Japanese city of Hiroshima.

The Southeast Asian countries and Washington fear China could impose military controls over the entire South China Sea. Beijing has in recent months built massive structures including radar systems and an airstrip over reclaimed reefs and outcrops.

“We express our strong opposition to any intimidating, coercive or provocative unilateral actions that could alter the status quo and increase tensions,” the ministers said. They did not mention China or any other country by name.

US Secretary of State John Kerry and his counterparts from Britain, Canada, France, Germany, Italy, and Japan issued the Statement on Maritime Security at the meeting.

The G7 also urged “all states to refrain from such actions as land reclamations” and “building of outposts… for military purposes.”

Disputes should be solved “in good faith and in accordance with international law,” including dispute settlement mechanisms and arbitration, the group added.

Meeting host Japan and the US have repeatedly expressed alarm over Chinese moves, while Beijing has voiced suspicion that they are using the G7 to criticize it.

An international tribunal in The Hague is preparing to decide a case brought by the Philippines in connection with the South China Sea.

Beijing has refused to take part and says it does not recognize the tribunal’s authority.

Speaking in Beijing, Chinese foreign ministry spokesman Lu Kang said he had not seen the G7 statement and refrained from commenting directly on it, but warned the G7 to avoid being biased towards China.

“If the G7 wants to continue to play an important role in the international community, it should maintain an objective attitude,” he told a regular press briefing. – Rappler.com