Apr 27, 2016 8:39 AM PHT
Agence France-Presse
Facebook Twitter Copy URL
Copied
The announcement culminates years of planning to replace Australia's aging diesel and electric-powered Collins Class submarines, which are due to leave service from around 2026 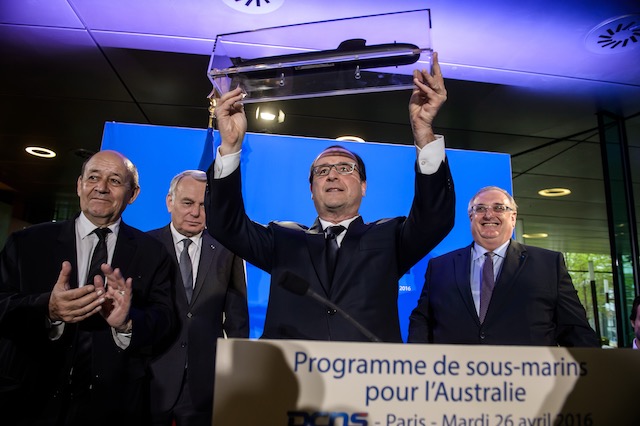 SYDNEY, Australia – France on Tuesday, April 26, beat off competition from Germany and Japan to win a Aus$50 billion (US$39 billion) contract to design and build Australia’s next generation of submarines, a decision Tokyo called “deeply regrettable”.

The announcement by Prime Minister Malcolm Turnbull culminates years of planning to replace Australia’s aging diesel and electric-powered Collins Class submarines, which are due to leave service from around 2026.

Turnbull said the 12 new subs to be delivered by French contractor DCNS under Australia’s biggest-ever defense contract “will be the most sophisticated naval vessels being built in the world”.

“This is a momentous national endeavor,” he said at an Adelaide shipyard where the submarines will be constructed.

The deal came as tensions grow between China and Australia’s allies Japan and the United States. Beijing is flexing its muscles in the region by developing airstrips and other facilities on reclaimed reefs in the contested South China Sea.

“It marks a decisive advance in the strategic partnership between the two countries who will cooperate over 50 years,” his office said in a statement.

A Japanese government-backed consortium led by Mitsubishi Heavy Industries, and German group ThyssenKrupp Marine Systems, were also in the running. But Canberra said DCNS was considered “best to meet all of our unique capability requirements”.

Japan was the early favorite and last November Tokyo said handing it the contract would help bolster regional security. Some senior US officials, including former deputy secretary of state Richard Armitage, also backed a Japanese build.

Japanese Defence Minister Gen Nakatani was quoted by a ministry official as telling reporters: “We did our best but the decision was deeply regrettable. We will ask the Australian side to explain.”

Asked if the decision to go with France would upset key ally the United States, Turnbull said the choice of contractor was “a sovereign decision for Australia”.

David Brewster, from the ANU Strategic and Defence Studies Centre in Canberra, said the choice of France was about “capability, cost and risk reduction over broader strategic factors which favoured the Japanese bid”.

“That may give Australia the best submarines, but it also means that we need to give much more active focus to engaging with Japan as our key regional security partner in the Pacific,” he added.

“In the long term that is probably of greater importance to us than the submarines.”

Australian submarines operate across huge areas, from the cold Southern Ocean to the tropics, and so require range and endurance to cope with wide-ranging geographic and oceanographic conditions.

Besides matching the capabilities of the Collins Class, the new generation needed to offer superior sensor performance and stealth capabilities.

The government’s preferred combat system and main armament is the heavyweight torpedo jointly developed by the United States and Australia.

DCNS has said it plans to build a 4,500-tonne conventionally-powered version of its 4,700 tonne Barracuda, to be named Shortfin Barracuda. It is described by the company as “the most technically complex artefact in Australia”.

It said on its website that the new vessel would be “the recipient of France’s most sensitive and protected submarine technology and will be the most lethal conventional submarine ever contemplated”.

The tender process was also politically sensitive domestically, with Canberra keen to maximize Australian industry involvement and jobs amid fears an off-the-shelf purchase could kill off the domestic shipbuilding industry.