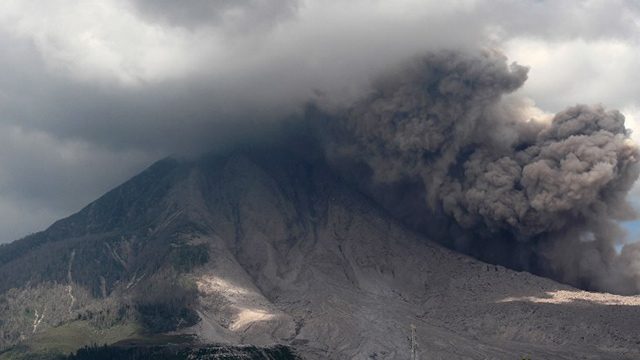 JAKARTA, Indonesia – Three people died and four others were critically injured Saturday, May 21, after a highly active volcano in western Indonesia erupted violently, shooting hot ash and gases into the atmosphere, an official said.

The victims were all farming on the slopes of Mount Sinabung, a rumbling volcano on Sumatra island, when they were consumed by clouds of hot gases, disaster agency spokesman Sutopo Purwo Nugroho said.

“Seven people were exposed to the hot clouds, killing three and leaving four others in a critical condition,” he said in a statement, adding the injured had been taken to hospital.

Several houses were also destroyed during the eruptions, which sent hot gases and columns of ash three kilometers (1.9 miles) into the sky, he added.

The victims were farming within the “red zone”, an area four kilometers from the volcano declared off limits by government authorities for safety reasons.

Sutopo said despite repeated warnings and government assistance to deter people from returning, some still “recklessly” farmed the area.

“This area should have been empty, because nobody should be inside the red zone,” he said.

It is not the first time the volcano has claimed lives since it spectacularly burst back into life in 2013.

Sixteen died during a particularly fierce eruption in 2014 and tens of thousands have been displaced over the years as Sinabung periodically rains down ash, gases and rock, devastating the local economy.

The volcano remains at the highest alert warning, and emergency authorities warn another eruption could occur anytime, Sutopo added.

Sinabung is one of 129 active volcanoes in Indonesia, which sits on the Pacific Ring of Fire, a belt of seismic activity running around the basin of the Pacific Ocean. – Rappler.com