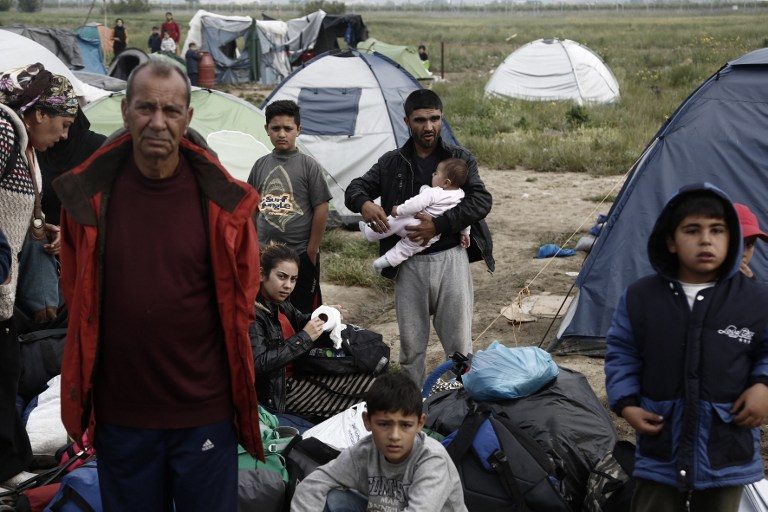 IDOMENI, Greece – Greek police on Tuesday, May 24, transferred some two thousand migrants out of the overcrowded camp of Idomeni, launching a major operation to clear up the squalid tent city where thousands fleeing war and poverty have lived for months.

The operation began at dawn, and by evening officials said they had put 2,031 people on buses to newly opened camps near Greece’s second city Thessaloniki, about 80 kilometers (50 miles) to the south.

“The operation will continue Wednesday [May 25],” Greece’s migrant crisis coordination office said in a statement.

The group transferred on Tuesday included 662 Syrians, 1,273 Kurds and 96 Yazidis.

A hundred of them refused to enter the new center and headed off by foot to downtown Thessaloniki, a police source said.

The camp on the Macedonian border has become a potent symbol of human suffering and chaos as Europe struggles with its worst migrant crisis since World War II.

The border is one of several in the Balkans closed since mid-February as countries on the migrant route have sought to halt the influx.

Around 700 police officers, assisted by a helicopter, took part in Tuesday’s operation but most media were kept at a distance.

ERT state television and state news agency ANA later showed migrants patiently queueing up to board buses and being driven away, some waving at the camera.

Many carried their belongings in huge bin bags, while others piled possessions into pushchairs.

It will take a week to complete the operation to clear all 8,400 people living there, the government said.

“It is all going well, perhaps better than we expected. The migrants are tired and no longer expect the borders to be reopened,” a police source said.

The transfer comes after a brutal winter of freezing rain and mud which saw many people trying to force their way across the border, sometimes resulting in violent encounters with Macedonian police.

At midday, bulldozers moved in to clear out tents, according to tweets from activists at the camp.

Many in the camp, fleeing war, persecution and poverty in the Middle East and Asia, arrived in Greece by crossing the Aegean Sea from Turkey aboard overcrowded boats.

So far this year, the International Organization for Migration says an estimated 190,000 migrants and refugees have entered Europe by sea, arriving in Italy, Greece, Cyprus and Spain. Another 1,359 have died en route.

A controversial deal between Turkey and the EU came into force in March aiming to halt the flow of people to Greece.

But Turkish President Recep Tayyip Erdogan warned Tuesday that parliament would block laws linked to the deal if Ankara is not granted its key demand of visa-free travel.

The European Commission on Monday, May 23, hailed the Greek move to empty the camp at Idomeni.

But Doctors Without Borders (MSF) representative Vicky Markolefa told Agence France-Presse there was “high insecurity” and “an increase in stress” for migrants who are “not fully aware of where they are going and what will come for them in the next days.”

In Geneva, the UN refugee agency said it was sending additional staff to help the process.

But Markolefa noted that a police cordon around the camp – mainly to keep media out – had also prevented access for many humanitarian workers.

Oxfam called on Athens to guarantee migrants have “full access” to information and medical treatment.

“Vulnerable people, the majority of whom are women and children, are being treated like pawns in a chess game,” the NGO added.

Desperate to be reunited

At its height, more than 12,000 people crammed into Idomeni, a camp that aid groups originally opened last year to accommodate just 2,500 people during what was at the time a short procedure to cross the border.

The camp exploded in size after Balkan states began closing their borders in February to stem the human tide seeking new lives in northern Europe.

Officials have said 6,000 spots are available at reception centers near Thessaloniki and elsewhere.

Many of the camp’s residents are women and children desperate to be reunited with male relatives who have forged ahead on their own – with the aid of smugglers – hoping to find a place of refuge for their families in richer EU states than debt-hit Greece.

Many are wary of relocating to organized camps away from the border or Athens because it could be harder to find people-smuggling contacts.

There are currently more than 54,000 migrants stranded in Greece, according to government estimates. – Vassilis Kyriakoulis with Catherine Boitard in Athens, AFP / Rappler.com