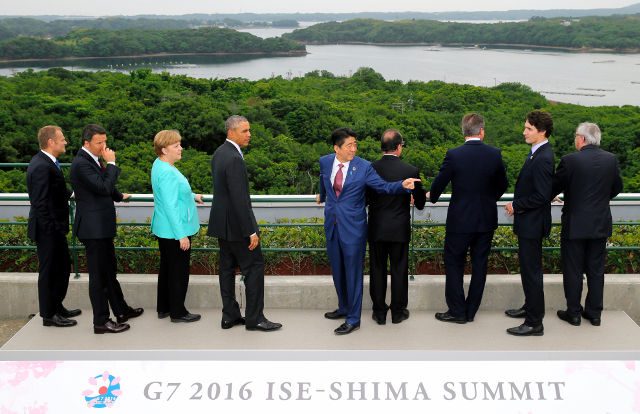 Facebook Twitter Copy URL
Copied
Her comments come on the sidelines of G7 summit talks in Japan, ahead of a formal communique from the club of rich nations due Friday

ISE-SHIMA, Japan – German Chancellor Angela Merkel said Thursday, May 26, that the Group of Seven (G7) has no plan to withdraw sanctions slapped on Russia over its involvement in the conflict in eastern Ukraine.

Her comments came on the sidelines of G7 summit talks in Japan, ahead of a formal communique from the club of rich nations due Friday.

“For me it’s too early to give the all clear,” Merkel told reporters in response to questions, adding that an earlier pro-sanction policy would remain in place.

“There is no change of position to be expected” from the G7, she said.

Earlier Thursday, European Council President Donald Tusk added his voice to the issue, saying the G7 needed to take a “clear and tough stance” on Russia for its moves in Ukraine – as well as China for its controversial claims in the South China Sea.

“The test of our credibility at the G7 is our ability to defend the common values that we share,” he told reporters at the Japan talks.

“This test will only pass if we take a clear and tough stance on every topic of our discussions here.”

Last year, the group of top industrialised nations – which expelled Russia in 2014 – warned Moscow it would face increased sanctions for its “aggression” in Ukraine.

Ukraine and its Western allies believe Russia annexed Crimea from Ukraine in March 2014 and fomented an insurgency in the country’s east in order to keep a grip over its former Soviet neighbour and prevent it from seeking membership of the EU and the NATO military alliance.

The 2015 peace accords signed in the Belarussian capital Minsk call for a ceasefire along with a range of political, economic and social measures to end the conflict that has claimed more than 9,300 lives.

The European Union imposed its own sanctions targeting Russia’s banks, oil and defence sectors after Malaysia Airlines flight MH17 was shot down over rebel-held eastern Ukraine in 2014.

The EU first imposed asset freezes and travel bans on leading rebel and Russian figures after Moscow’s annexation of Crimea in March of that year, and has expanded the sanctions as the conflict spread into eastern Ukraine.

The decision to impose full-blown economic sector sanctions was much more controversial and painful, with the move being particularly hard on certain European countries such as Italy and Germany, which have particularly important trade and political ties with Moscow. – Rappler.com