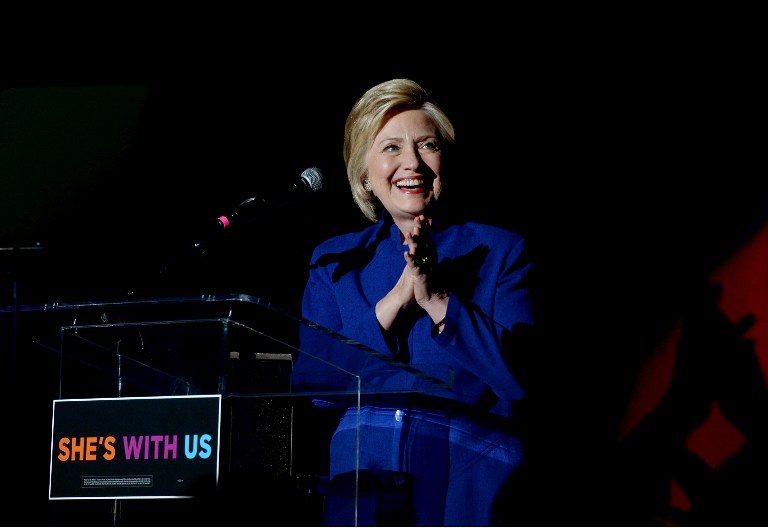 Facebook Twitter Copy URL
Copied
Hillary Clinton is poised to proclaim herself the first female White House nominee of a major US party, as voters from New Jersey to California cast ballots in the last major primaries of the 2016 race

NEW YORK, USA – Hillary Clinton stood poised Tuesday, June 7, to proclaim herself the first female White House nominee of a major US party, as voters from New Jersey to California cast ballots in the last major primaries of the 2016 race.

Delegate counts Monday, June 6, showed the former secretary of state clinching the Democratic nomination and Tuesday’s results are set to secure her status as party flagbearer, putting her on course for a brutal showdown with Republican billionaire Donald Trump in November’s election.

With the spotlight of history set to shine brightly Tuesday night on Clinton’s achievement, Trump faced a darker form of scrutiny, over his attacks on a Mexican-American federal judge that leaders in his own Republican Party described as textbook racism.

Senate Majority Leader Mitch McConnell urged the presumptive Republican nominee to “quit attacking… various minority groups in the country and get on message.”

Clinton’s challenger Bernie Sanders has so far ignored media reports that she has clinched the magic number of delegates.

The self-declared democratic socialist insists the nominee will not be chosen until the party convention in July.

It remained unclear what effect the reports that Clinton had passed the milestone of 2,383 delegates would have on voters.

“I’m a Bernie Sanders guy all the way.” said 21-year-old student Saul Gomez, voting in Los Angeles. “Honestly he seems a lot more genuine to me,” he said.

“He’s consistent, and I dig that.”

Clinton – the 68-year-old former first lady, New York senator and for 4 years President Barack Obama’s top diplomat – has scheduled a speech in Brooklyn late Tuesday in perhaps the pinnacle of her political career to date.

It marks a dramatic resurgence for the woman often described as the most experienced US presidential candidate in generations, but who remains mired in scandal about her emails and perceptions of dishonesty – leaving her with unpopularity ratings surpassed only by the controversial Trump.

Her stiff campaigning style saw her lose to Obama in their 2008 nomination battle and has drawn stark contrast to the crowds of thousands of young people that 74-year-old Sanders has energized nationwide.

“My heart is beating faster today,” Boxer told CNN. “The men had a very big head start on us, particularly white men, as you know. So it has taken us a long time to prove to the people. All we’re saying is we’re equal.”

Despite Sanders’s proclamations that the race is not over, Clinton has won 3 million more votes than Sanders and is well ahead in the pledged delegate count.

Her campaign manager said they would celebrate Tuesday night and then focus on unifying the party to defeat Trump.

“Senator Sanders and his campaign have achieved incredible things. They’ve brought so many people into the process… these people will be so important to winning the general election,” Robby Mook told CNN.

Meanwhile Trump grappled with the fallout of his attacks on Judge Gonzalo Curiel, who is presiding over a case against one of his business interests.

Trump called him biased because he is of Mexican descent.

Under fire from Republican grandees, Trump walked back his remarks, but he stopped short of a retraction.

“It is unfortunate that my comments have been misconstrued as a categorical attack against people of Mexican heritage,” Trump said in a statement.

“I do not feel that one’s heritage makes them incapable of being impartial, but, based on the rulings that I have received in the Trump University civil case, I feel justified in questioning whether I am receiving a fair trial.”

But Jeb Bush, whom Trump vanquished in the Republican primaries, tweeted that the real estate tycoon “should retract his comments, not defend them.”

“There is no place for racism in the GOP, or this country,” Bush said.

Trump’s belligerence proved too much for Republican Senator Mark Kirk, who said he was withdrawing his support over Trump’s “un-American” stance and poor temperament.

“Donald Trump’s latest statements, in context with past attacks on Hispanics, women and the disabled like me, make it certain that I cannot and will not support my party’s nominee for president regardless of the political impact on my (re-election) candidacy or the Republican Party,” Kirk said. – Jennie Matthew with Michael Mathes in Los Angeles, AFP / Rappler.com