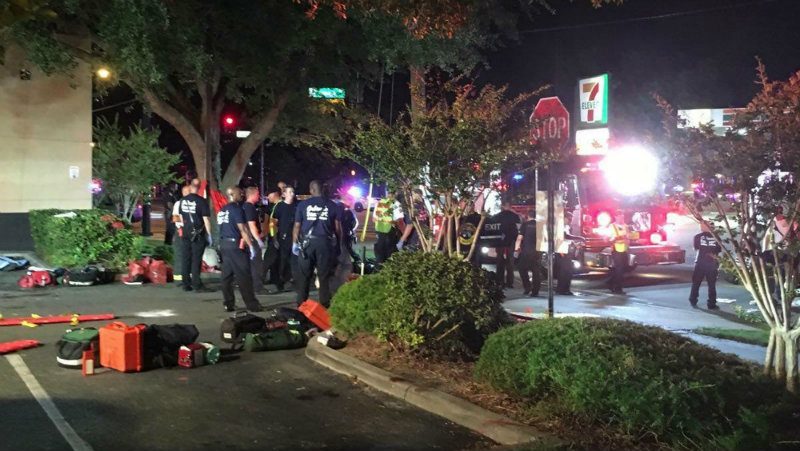 Scenes of carnage unfolded at the packed venue where another 53 people were injured, some critically.

Officials were probing whether the suspect, widely identified as 29-year-old Omar Mateen, a US citizen of Afghan descent, had radical Islamic “leanings.”

US networks CNN and NBC, citing law enforcement sources, said the gunman called police before the shooting to pledge allegiance to the Islamic State (ISIS) group.

ISIS-linked news agency Amaq then claimed that an ISIS fighter carried out the shooting.

“The attack that targeted a nightclub for homosexuals in Orlando, Florida and that left more than 100 dead and wounded was carried out by an Islamic State fighter,” it said in a terse statement quoting a “source.”

But the father of the suspect said his son may have been motivated by homophobia.

And the suspect’s ex-wife, who divorced him in 2011, told the Washington Post he had been violently abusive to her but was not especially religious.

“This had nothing to do with religion,” father Mir Seddique told NBC News, recalling a recent incident in downtown Miami.

“He saw two men kissing each other in front of his wife and kid and he got very angry,” the father said, apologizing to the victims.

Terrified survivors described how the gunman raked the club with bullets, prompting a police SWAT team to storm the venue and shoot him dead.

Mayor Buddy Dyer told a mid-morning news briefing in Orlando that 50 people had been killed in addition to the shooter, more than doubling the previous toll.

“There are another 53 that are hospitalized,” he added. Officials said many of the victims are in critical condition, so the death toll could yet rise.

Omar Mateen was born to Afghan parents in 1986 and lived in Port St Lucie, Florida, about two hours drive from Orlando.

FBI official Ronald Hopper said authorities were looking into whether the suspect had “leanings” toward Islamic extremism.

The latest mass shooting comes at the height of what is already a heated US presidential election campaign, and the main candidates were quick to react.

Democratic flag-bearer Hillary Clinton tweeted that the attack was “devastating” news and that her “thoughts are with those affected by this horrific act.”

Her Republican rival Donald Trump, who has called for Muslims to be banned from traveling to the United States, tweeted: “When will this stop?”

“When will we get tough, smart, and vigilant?” he demanded, later boasting of having been “right on radical Islamic terrorism.”

Events unfolded over a 3-hour period from at around 2 am (0600 GMT) when shots rang out amid the throbbing music at the Pulse Orlando nightclub near closing time.

Police said the suspect was armed with an assault rifle and a handgun.

A police officer working “extra duties” at the club responded, joined by two other officers, who exchanged fire with the suspect.

“The suspect at some point went back inside the club where more shots were fired. This did turn into a hostage situation,” police chief John Mina said.

“At approximately 0500 hours (0900 GMT) this morning, the decision was made to rescue hostages that were in there.”

Police then stormed the venue, using explosives and breaking through a wall with a wheeled armored vehicle known as a BearCat.

Mina said about 30 people were rescued during the operation and that the police priority now would be to identify the victims and notify next of kin.

It was unclear whether all the victims were killed by the gunman or if some died in the ensuing shootout.

The attack coincides with gay pride month in the United States, with festive events all over the country, including in Orlando last week.

Speaking to Sky News, clubber Ricardo Negron, who was inside when the shooting began, described how the gunman raked the club with bullets.

“People just dropped on the floor. I guess the shooter was shooting at the ceiling because you could see all the glass from the lamps falling,” he told the network.

“I fell down. I crawled out. People were trying to escape out the back. I just know that when I hit the ground, I was crawling and I hit my elbows and my knees.”

He said there was “blood everywhere.” – Federica Narancio with Andrew Beatty in Washington, AFP / Rappler.com