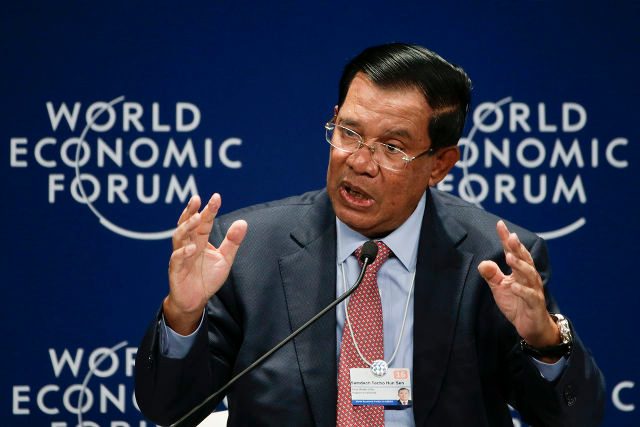 In an angry speech Hun Sen also accused an international court of political bias as it prepares to rule on a sea dispute between the Philippines and China.

The Hague-based Permanent Court of Arbitration is widely expected to rule against Beijing when it delivers its verdict in the coming weeks.

Last week a meeting of foreign ministers from China and the 10-member Association of Southeast Asian Nations (ASEAN) in Kunming ended in chaos and renewed allegations of regional bullying by Beijing.

The diplomatic fracas erupted when Malaysia released a joint statement from ASEAN members voicing “serious concerns” at land reclamation and other activities.

The strongly-worded statement did not name China but clearly referred to its extensive island-building.

But the statement was suddenly retracted for reasons that have yet to be fully explained.

The incident was seen as another example of ASEAN’s inability to present a united front to China as it ramps up its presence in the waterway.

“It is very unjust for Cambodia,” he said, accusing unnamed countries of “using Cambodia to counter China”.

“They use us and curse us,” he added.

Hun Sen also hit out at the Hague-based arbitration court.

“This is not about laws, it is totally about politics. I will not support any judgement by the court,” he said, adding that the case was a “political conspiracy between some countries and the court”.

China claims nearly all of the South China Sea despite competing partial claims by ASEAN members the Philippines, Vietnam, Malaysia and Brunei, as well as Taiwan.

In 2012 ASEAN foreign ministers failed to release a joint statement for the first time at the end of their annual gathering, with the Philippines blaming event host Cambodia for blocking criticism of China. – Rappler.com