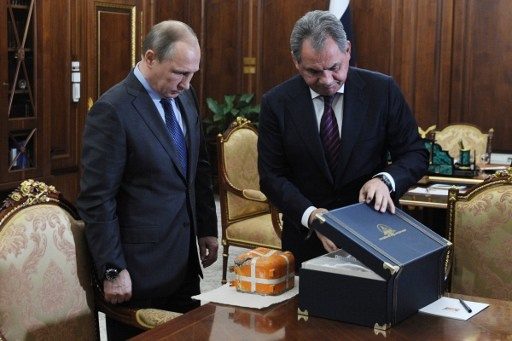 Putin has repeatedly demanded an apology from Erdogan since the November 24 incident and the latest move could help spell the end of a feud that has seen Moscow slap a raft of sanctions on Ankara.

“The head of the Turkish state in his message expressed his sympathy and deepest condolences to the family of the dead Russian pilot and said sorry,” Kremlin spokesman Dmitry Peskov told reporters.

He added that Erdogan wrote in a letter that he wanted to do “everything possible for the restoration of the traditionally friendly relations between Turkey and Russia.”

The Kremlin later released a statement citing Erdogan as saying Ankara “never had the desire and the intention” to down the Russian Su-24 warplane.

“I want to once again express my sympathy and deep condolences to the family of the dead Russian pilot and I say sorry,” the statement quoted the Turkish leader as saying.

Turkey’s Anadolu state news agency reported that presidential spokesman Ibrahim Kalin said Erdogan had written to Putin to “express his regrets” about the downing of the warplane, but he did not explicitly confirm Erdogan had apologized over the incident.

“We are pleased to announce that Turkey and Russia have agreed to take necessary steps without delay to improve bilateral relations,” Kalin added.

Turkey’s downing in November of the warplane on its border with Syria – where Moscow is flying a bombing campaign in support of long-standing ally President Bashar al-Assad – sparked an unprecedented crisis in the two nations’ relations.

Ankara had argued that the Russian plane strayed into its airspace and ignored repeated warnings, but Russia insisted it did not cross the border and accused Turkey of a “planned provocation.”

The countries are on opposing sides in the Syrian conflict, with Ankara backing rebels fighting to topple Assad while Moscow is one of his last remaining allies.

‘Stab in the back’

The downing of the plane sparked a bitter war of words between the two strongman leaders with Putin calling it a “stab in the back” and accusing Erdogan of involvement in the illegal oil trade with the Islamic State group.

Erdogan said at the time he wanted to meet Putin in person but the Kremlin blanked the proposal and the pair have not spoken since.

In response to the jet incident, Moscow imposed a series of economic sanctions on Turkey, including an embargo on many Turkish food products and consumer goods.

Russia also halted charter flights between the two countries, stopped the sale of package holidays in Turkey and scrapped its visa-free regime for Turkish visitors.

According to the Kremlin, Erdogan also said in his message that the authorities were probing a Turkish national allegedly responsible for the downing of the jet.

Turkey’s Hurriyet newspaper reported that Turkish militia fighter Alparslan Celik — who Moscow had accused of killing pilot Oleg Peshkov as he parachuted to the ground after his plane was shot down — was released from prison on Monday.

In a sign that ties could be set to warm, a Turkish foreign ministry source told AFP that Foreign Minister Mevlut Cavusoglu had accepted a Russian invitation to attend the Black Sea Economic Cooperation meeting in Sochi on July 1. – Gabrielle Tétrault-Farber with Fulya Ozerkan, Agence France-Presse / Rappler.com