Indonesia’s cure to the common cold only requires a coin 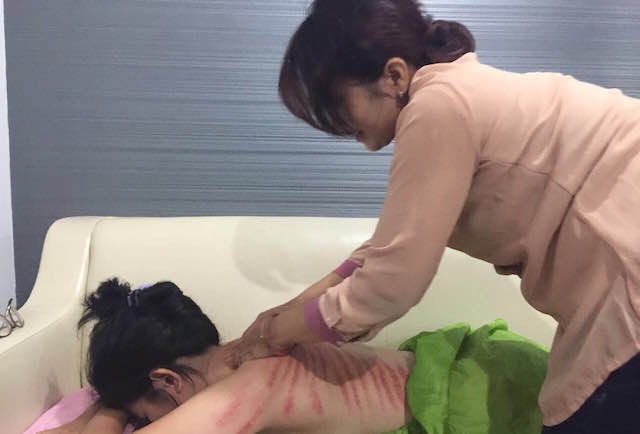 Facebook Twitter Copy URL
Copied
The treatment leaves red line marks on the patient's back. Would you try it?

Ursula, a Rappler reporter, had just had kerokan done on her.

The red lines and marks are caused by kerokan, a traditional Indonesian treatment wherein an object is rubbed repeatedly across an individual’s back, followed by a gentle body massage.

“During the massage, the rubbing is a little bit painful in the stiff regions like my shoulders and hip area but once it is over, I feel very relaxed,” said Ursula.

In Indonesia, locals believe this is a cure to the common cold – and all it takes is a blunt object.

Similar to Tylenol and other common medication, kerokan is used as a cure for minor ailments like muscle ache, fever, and cold.

All the technique requires is some oil as lubricant and a blunt object, preferably a coin or a ladle, although other things like onions have been used as well to make the rubbing hurt less.

Local Indonesians believe that the action releases wind from the body by increasing blood circulation under the surface of the skin.

The red lines caused by repeated rubbing of the coin is a trademark of the technique. These lines disappear after a week or so.

This massage technique is also popular in other Asian countries. It is called Gua Sha in China, and Cao Gio in Vietnam.

Kerokan is offered by many spas in Jakarta, and endorsed even by real doctors.

Yani Srihandayani, a professional masseuse, said she learned the technique from her mother as a child, after watching her perform it on other family members.

“If anyone didn’t feel well in the house, my mother would perform Kerokan on them especially when they caught cold or throat problems. We all used to like it,” she said.

Is it really effective though?

Indonesians swear by the treatment so in 2005, a medical professor, Dr. Didik Tamtomo put the practice to the test by designing a scientific experiment with 38 women.

The experiment concluded that kerokan increases blood and oxygen circulation in the body and also the level of beta-endorphins.

The study concluded that the high level of endorphins produced by kerokan may even cause some to be addicted to the massage technique just like drugs.

Have you tried kerokan? Would you like to? Let us know in the comments below. – Rappler.com