Jul 2, 2016 4:23 PM PHT
Agence France-Presse
Facebook Twitter Copy URL
Copied
(4th UPDATE) Nine of the victims are Italian, while Japan confirms that 7 of its nationals are killed. A US citizen and a 19-year-old Indian are also among the dead. 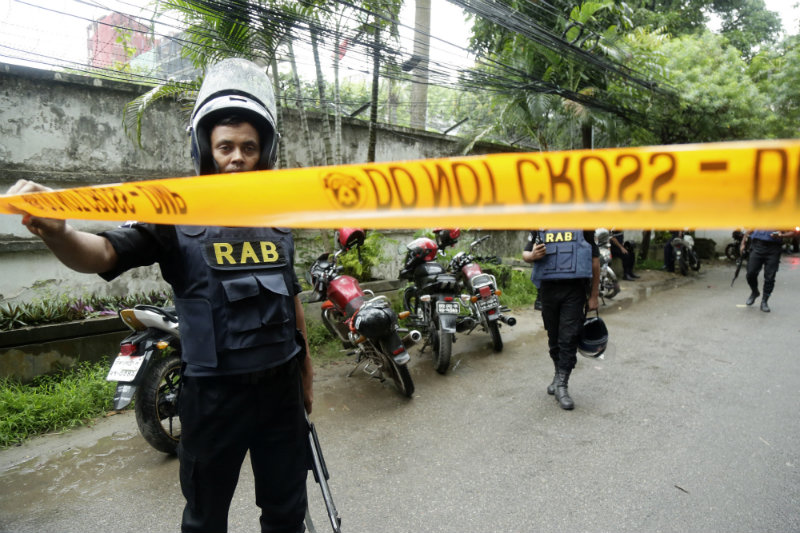 DHAKA, Bangladesh (4th UPDATE) – Bangladesh’s prime minister implored Islamist extremists to stop killing in the name of religion Saturday, July 2, after 20 hostages were slaughtered at the start of the Eid holiday in a restaurant packed with foreigners.

Nine victims were Italian while Japan confirmed that 7 of its nationals were killed. A US citizen and a 19-year-old Indian who was studying in California were also among the dead.

As the Islamic State (ISIS) group claimed responsibility for the bloodbath in the capital Dhaka, survivors told of how the hostage-takers separated locals from foreigners before embarking on a killing spree.

One of the assailants was captured alive and arrested, the army said.

Security officials said most of the victims were slaughtered with sharpened machete-style weapons. (READ:Bangladesh hostage siege: What we know so far)

Prime Minister Sheikh Hasina’s government has previously blamed a string of deadly attacks against religious minorities and foreigners on domestic opponents but the latest will heighten fears that ISIS’s reach is spreading.

“Islam is a religion of peace. Stop killing in the name of the religion,” Hasina said in an impassioned televised address to the nation in which she declared two days of mourning.

“Please stop tarnishing our noble religion… I implore you to come back to the rightful path and uphold the pride of Islam.”

The attack, by far the deadliest of a recent wave of killings claimed by ISIS or a local Al-Qaeda offshoot, was carried out in a neighborhood which is home to the country’s elite and houses many embassies.

Announcing the end of the siege, officials said 13 hostages had been rescued after members of a special force took control of the cafe.

But while Hasina called the outcome a “success”, the security forces later revealed that 20 of those taken captive were killed.

“Most them had been brutally hacked to death with sharp weapons,” an army spokesman, Brigadier General Nayeem Ashfaq Chowdhury, told reporters.

An army spokesman said the dead hostages included nine Italians, seven Japanese, one Indian, one US citizen of Bangladeshi origin and two Bangladeshis.

Italy’s government confirmed that nine of its nationals had been killed and a 10th was unaccounted for.

“The terrorists want to rip away the daily fabric of our lives,” said Italy’s Prime Minister Matteo Renzi. “Our duty is to reply with even greater force, by affirming our values, the values of freedom of which we are proud, and which are stronger than hatred or terror.”

US officials said one American citizen was among those killed, without identifying the victim.

And the government in New Delhi confirmed that a 19-year-old Indian who was studying at the University of California, Berkeley, had died.

“The attack in Dhaka has pained us beyond words,” Indian Prime Minister Narendra Modi, who is a close ally of Hasina, said on Twitter.

Foreigners and Bangladeshis could be seen standing outside the Holey Artisan Bakery after the siege, awaiting news on their loved ones inside.

Witnesses recounted how a massive gunfight erupted on Saturday morning as more than 100 commandos launched the rescue operation, nearly 11 hours after the siege began at around 9.30 pm.

Eight hostages including a foreigner were rescued in the first few minutes of the operation. TV footage showed ambulances rushing some of those who had been freed to a military hospital.

The father of one of the survivors was told by his son how the hostage-takers separated the locals from foreigners.

“They (the foreigners) were taken to the upper floor and the Bangladeshis were kept around a table,” Rezaul Karim told AFP.

The area around the restaurant was cordoned off after the militants launched their attack and then became involved in a fierce firefight.

Police said two officers, including the head of the local police station, were killed in the initial stages. Around two dozen officers were injured.

The attack triggered widespread condemnation, with Pope Francis condemning “such barbarous acts as against God and humanity”.

“Islamist terrorism strikes everywhere in a blind, cowardly way,” he said. “The international community must be united to fight it relentlessly.”

Earlier Friday, a Hindu temple worker was hacked to death in western Bangladesh and a Hindu priest was stabbed early Saturday in the southwest.

Last month authorities launched a crackdown on local jihadists, arresting more than 11,000 people but critics allege the arrests were arbitrary or designed to silence political opponents.

Bangladesh’s main Islamist party has been banned from contesting polls and most of its leaders have been arrested or else executed after recent trials over their role in the 1971 war of independence from Pakistan. – Rappler.com