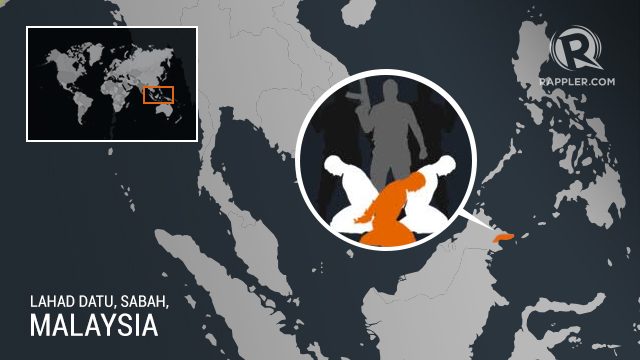 KUALA LUMPUR, Malaysia – Three Indonesians have been kidnapped by armed men off an area in Malaysia, police said Sunday, July 10, where militants from the Abu Sayyaf group have been blamed for repeated kidnappings.

Authorities did not say if they believed the Abu Sayyaf was involved.

The incident happened off Lahad Datu in Malaysia’s eastern Sabah state on Borneo island, which is just a short boat ride away from Mindanao in the Philippines.

Islamist guerillas from Mindanao staged a bloody assault in the area in 2013.

Earlier this year, the Abu Sayyaf beheaded 2 Canadian tourists who had been kidnapped and a Malaysian man was beheaded last year.

Seven Indonesian sailors were kidnapped at gunpoint in June.

Also this year, the group kidnapped 14 Indonesian sailors, holding them in their stronghold in the southern Philippines. They were later freed but there was no information on whether a ransom was paid.

The Abu Sayyaf is a loose network of a few hundred Islamist militants, formed in the 1990s with seed money from Osama bin Laden’s Al-Qaeda network, that has earned millions of dollars from kidnappings-for-ransom.

Although its leaders have pledged allegiance to the Islamic State group, analysts say they are mainly focused on lucrative kidnappings.

The abduction was reported a day after Philippine president Rodrigo Duterte said the group’s activities do not fit his definition of criminality, as they were driven by “desperation” to commit such acts.

Malacañang reiterated on Sunday, July 10, that the Abu Sayyaf would be held accoutable for all their criminal acts. – Rappler.com