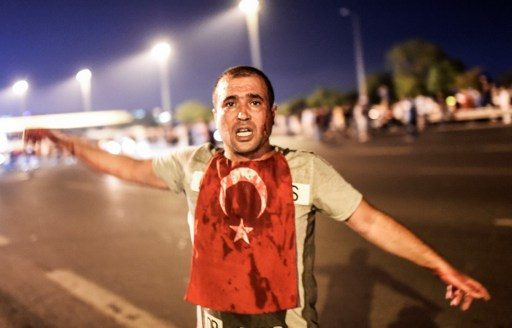 Facebook Twitter Copy URL
Copied
Both soldiers and supporters of Turkish President Tayyip Erdogan take to the streets. Here's the situation in Turkey, in pictures.
MANILA, Philippines – Turkish Prime Minister Binali Yildirim confirmed that a coup was underway in Turkey on Saturday, July 16, as soldiers took to the streets of Ankara and Istanbul.

The Turkish military said the coup was launched to restore “constitutional order, democracy, human rights and freedoms and let the supremacy of the law in the country prevail, to restore order which was disrupted.”

Gunshots were heard in Ankara as military jets and helicopters hovered overhead. The Bosphorus Bridge and Fatih Sultan Mehmet Bridge were also reported closed. People took to the streets in support of Turkish President Tayyip Erdogan.

The European Union, meanwhile, has called for “restraint and respect for democratic institutions” in Turkey. Here’s the latest in pictures: