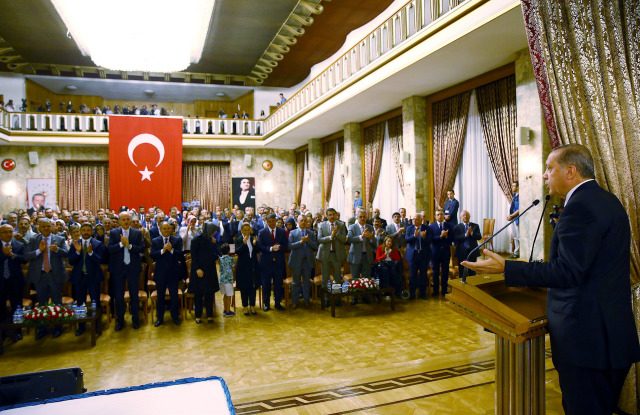 ISTANBUL, Turkey – Turkey pushed on with a sweeping crackdown against suspected plotters of its failed coup Saturday, July 23, defiantly telling EU critics it had no choice but to root out hidden enemies.

Using new emergency powers, President Recep Tayyip Erdogan’s cabinet decreed that police could now hold suspects for one month without charge, and also announced it would shut down over 1,000 private schools it deems subversive.

A week after renegade soldiers tried to oust him with guns, tanks and F16s, Erdogan’s government has detained over 12,000 people it suspects are state enemies, including almost 300 officers of the guard shielding his Ankara palace.

As part of the mass arrests, police detained a nephew of the US-based cleric Fethullah Gulen, 75, whom Turkey accuses of orchestrating the July 15 putsch and whose followers it labels a “terrorist” group.

Fears that strongman Erdogan will seek to further cement his rule and muzzle dissent through repression have strained ties with Western NATO allies and cast a darkening shadow over Turkey’s bid to join the European Union.

Turkey’s EU Minister Omer Celik insisted that European leaders don’t appreciate the scale of the threat and lamented that none had come to stand shoulder-to-shoulder with Turkey’s leaders after the bloodshed of July 15.

“Come here and see how serious this is!” Celik told a foreign media briefing. “Those who look at Turkey from far away think it is a Pokemon game,” he added, referring to a viral smartphone game with Japanese cartoon characters.

He added that Gulen was more dangerous than either the late Al-Qaeda chief Osama bin Laden or Islamic State (IS) group jihadists.

Celik insisted that Turkey, despite the turmoil, remained committed to its long-term bid to join the European Union, and would honor a landmark deal with the EU to stem the flow of migrants to Europe.

“We don’t believe this is the end of the road, it is time to start brand new momentum,” Celik told reporters in Ankara, when asked if the membership bid was still a strategic aim.

Erdogan struck a darker tone, telling France 24 television that “for the past 53 years Europe has been making us wait”, and that no EU candidate country “has had to suffer like we have had to suffer”.

He rejected the European criticism of his iron-fisted response to the coup, charging that “they are biased, they are prejudiced, and they will continue to act in this prejudiced manner towards Turkey”.

Ankara has insisted that the measures would not add up to an attack on democracy, arguing that they were no different to those France had taken since being hit in a series of bloody jihadist attacks.

Amid the global criticism, Turkey for the first time since the coup released a large group of detainees, 1,200 low-ranking soldiers, saying it wanted to swiftly sort out those who had fired on the people from those who had not.

The crackdowns are part of seismic changes that have rocked Turkey since the shock of the coup attempt that claimed 270 lives.

The night of violence left 24 rebel soldiers dead. Some 179 civilians, 62 police and 5 soldiers who opposed the soldiers also died and have been hailed as “martyrs”.

Since the coup, massive crowds of flag-waving Erdogan supporters have taken to the streets night after night to celebrate their leader.

But rights activists and opposition groups, including from Turkey’s Kurdish minority, fear a widening witch hunt of government critics.

According to the authorities, over 12,000 people have been detained – mainly soldiers but also police, judges, teachers and civil servants.

In the latest move targeting the education sector, 1,043 private schools and 1,229 associations and foundations will be shut down, said Saturday’s Gazette statement.

Amid the turmoil, strains have also grown with the United States – which relies on Turkish bases to launch airstrikes against the Islamic State group in Syria and Iraq – as Erdogan has repeatedly demanded it extradite Gulen.

President Barack Obama said Friday, July 22, the US would take seriously any “evidence” of wrongdoing by the preacher, who lives in a secluded Pennsylvania compound and has denied the claims against him.

Obama also flatly rejected claims that the US had prior intelligence of the July 15 putsch attempt, calling such suggestions “unequivocally false”. – Rappler.com