Jul 25, 2016 8:38 AM PHT
Agence France-Presse
Facebook Twitter Copy URL
Copied
The bombardment of Aleppo has worsened the plight of residents of besieged eastern neighborhoods, where food and medical supplies are becoming increasingly scarce 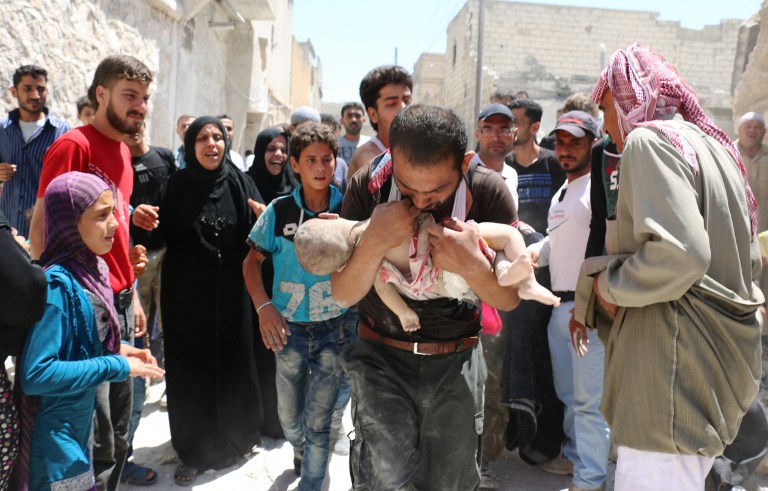 The Syrian Observatory for Human Rights monitor said at least 8 people were killed and 20 wounded when rockets rained down on several neighborhoods of Old Damascus.

In the north, the bombardment of Aleppo since Saturday, July 23, has worsened the plight of residents of besieged eastern neighborhoods, where food and medical supplies are becoming increasingly scarce.

The hospitals and a blood bank that was also hit are in the Al-Shaar neighborhood of Syria’s second city, said the Independent Doctor’s Association, a group that supports clinics in Aleppo.

It said a two-day-old baby was killed in the children’s hospital early Sunday, the second raid on the same facility in about 9 hours.

“After the second strike, we had to move him (the baby) downstairs to the bomb shelter, and that’s why he died,” said Malika, the hospital’s head nurse.

Footage posted by the IDA of the aftermath showed agitated doctors carrying a tiny baby in a room lined with incubators, with sandbags piled high outside the entrance.

All 4 hospitals and the blood bank were out of service Sunday, the city’s opposition-run “health directorate” said, and warned that doctors cannot get medicine into Aleppo or transfer the wounded out.

Opposition-controlled areas of the city are regularly hit by air strikes by the regime and its key ally Russia.

According to the World Health Organization, Syria was the most dangerous place for health workers in 2015, with 135 attacks on health facilities and workers.

The Syrian Observatory said at least 5 civilians including a child were killed in further air raids Sunday.

According to the IDA, 5 hospitals are left operating in eastern Aleppo, devastated by a regime siege since earlier this month.

“We demand an immediate end to and accountability for the collective punishment the city faces,” it said, denouncing what it called “war crimes”.

Marianne Gasser, head of the International Committee of the Red Cross in Syria, said the hospital strikes filled her with “overwhelming despair”.

In Damascus, rebel rockets fired from insurgent positions on the outskirts of the capital hit several central districts, the Observatory said.

An Agence France-Presse correspondent said he saw bloodied people running in the streets, calling for help and waiting for ambulances.

A Facebook page dedicated to pinpointing rocket and mortar fire in the city posted pictures of destruction at a restaurant, showing overturned chairs and tables and blood on the floor.

“I hid in the entrance of a building… and saw people running. Some were wounded and their clothes were stained with blood,” said Layla al-Jawabrah, 23.

Syria’s conflict erupted in March 2011 with anti-government protests but has since morphed into a complex multi-front war.

At least 280,000 people have been killed and more than half the population have been forced to flee their homes, as world powers are increasingly drawn into the conflict.

Repeated attempts to broker a political settlement built on a teetering ceasefire have failed.

Moscow and Washington are nominally co-chairs of international efforts to bring President Bashar al-Assad’s regime to the negotiating table with opposition groups.

The UN has set August as the target for talks to resume.

On Sunday, Damascus said Syria “is ready to continue the Syrian-Syrian dialogue without any preconditions, in the hopes that this dialogue will lead to a comprehensive solution”.

The statement on SANA, quoting an unidentified foreign ministry official, said Syria would be “ready to coordinate air operations against terrorism as part of the agreement between Russia and the United States”.

Moscow has sought to work with Washington on military action against the Islamic State group and Al-Qaeda affiliate Al-Nusra Front.

Sunday saw heavy clashes in the northern town of Manbij, where the Syrian Democratic Forces alliance is pressing its campaign against ISIS, the Observatory said.

It reported at least five SDF fighters and 18 ISIS militants killed, as well as 8 civilians.

The US-led coalition has carried out air strikes against ISIS since September 2014, and Russia began its own bombing campaign backing Assad’s forces a year later.