PHILADELPHIA, USA (3rd UPDATE) – Hillary Clinton became the first woman in history to win the White House nomination of a major US political party Tuesday, July 26, securing the backing of Democrats at a convention in Philadelphia.

After a tumultuous convention opening which saw Sanders and Clinton supporters trade jeers and chants, cheers erupted as Clinton passed the 2,382-delegate threshold needed for the nomination, setting up a showdown with Republican Donald Trump in November.

Although the outcome was virtually a foregone conclusion, the state-by-state vote saw rowdy displays on the convention floor.

A handful of diehard Sanders delegates expressed frustration with their candidate’s defeat, but they were drowned out by ecstatic Clinton supporters.

After his delegates had been counted, Sanders took the floor and, in a bid to unify the party, called for a vote by acclamation.

“I move that Hillary Clinton be selected as the nominee of the Democratic Party for president of the United States,” he said to deafening cheers and finally a chorus of “ayes.”

Delegates thrust placards in the air, forming a mosaic of “H’s” that coated the stadium floor.

“It’s historic, I haven’t taken it all in yet,” an emotional Senator Tammy Baldwin told Agence France-Presse.

Clinton’s nomination was formally put forward by Senator Barbara Mikulski of Maryland, the longest serving woman in the history of the US Congress. Civil rights icon John Lewis, a congressman from Georgia, seconded the nomination. 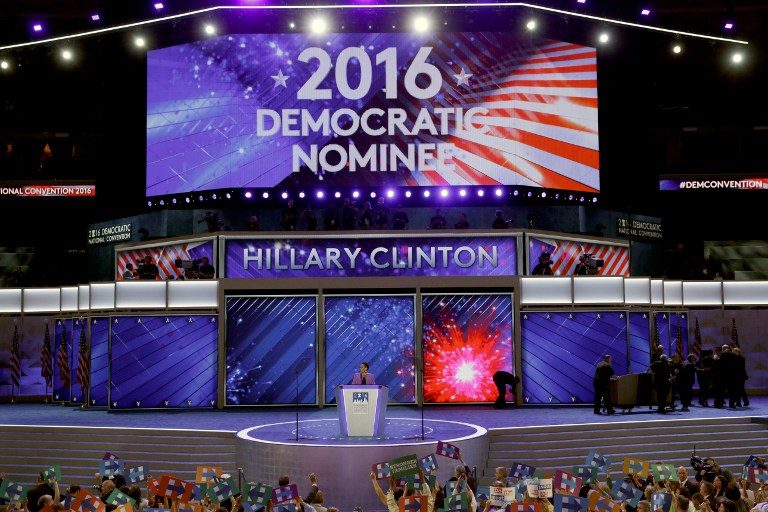 The Clinton camp is now looking to unite the party’s factions.

Monday saw disruptive protests and a rancorous fight over leaked emails that showed party bias against Sanders. Frustration boiled over as his delegates jeered speakers who mentioned Clinton.

Vice President Joe Biden, who will address the convention Wednesday along with President Barack Obama, dismissed concerns the party was not uniting behind Clinton.

“We’ve got to show a little class and let them be frustrated for a while. It’s OK,” he said of Sanders supporters as he toured the convention arena Tuesday.

Sanders meanwhile called on his supporters to get behind Clinton.

“In my view, it’s easy – it’s easy to boo, but it is harder to look your kids in the face who would be living under a Donald Trump presidency,” he said.

Trump took the usual shots at Clinton during a speech to the Veterans of Foreign Wars in Charlotte, North Carolina, calling her “Crooked Hillary” and charging that her use of a private email account as secretary of state “put America’s entire national security at risk.”

A Clinton campaign official said Tuesday’s convention events aim to draw a sharp contrast with Trump. The line-up of speakers will talk about her life-long fights to make a difference.

Chief among them will be former president Bill Clinton, who will take the stage during primetime to hail his wife as a “change-maker,” the official said.

But Clinton and the others – including mothers who have lost children to gun violence or in clashes with police – will also have the unstated mission of mending fences with Sanders’ army of vocal young activists.

Michelle Obama appeared to soothe some of the Sanders zealots Monday night, July 25, as she delivered a heartfelt endorsement from one first lady to another and hailed the inspirational prospect of a first female US president.

“In this election, I’m with her,” Obama said.

She also praised how Clinton handled her defeat to Barack Obama in the Democratic primaries 8 years ago.

“She didn’t get angry or disillusioned. Hillary did not pack up and go home,” she said. “As a true public servant, Hillary knows that this is so much bigger than her own desires and disappointments.”

From ‘political revolution’ to revolt Despite Sanders calling on his flock to get behind Clinton, his self-styled “political revolution” appears to have transformed into a revolt.

Sanders himself was booed by some sections of the audience when he told the crowd Monday: “Hillary Clinton will make an outstanding president and I am proud to stand with her tonight.”

Michigan delegate Charles Niswander, 28, said he and other Sanders delegates would never line up behind Clinton.

“None of them want her, the people who voted for Bernie,” Niswander said.

The Federal Bureau of Investigation said it was investigating the “cyber intrusion,” which the Clinton campaign blamed on Russian hackers it said are bent on helping Trump.

The 69-year-old Democratic icon and two-term president remains a powerful force on the national stage, although he is more gaunt and his energy is no longer boundless as it appeared 4 years ago.

At the 2012 Democratic convention, he delivered closing arguments for why Barack Obama should be re-elected, a voice of experience explaining Obama’s policies in clear, cogent detail and why he felt Republican policies were failing. – Agence France-Presse / Rappler.com