Tied to post, blindfolded, given 3 minutes to relax: How Indonesia carries out its death penalty CILACAP, Indonesia – On Friday, July 29, about 45 minutes after midnight, Indonesia executed 4 drug convicts who were handed the death penalty.

14 were scheduled to be executed but in the end, only 4 were killed. Of the 4, 2 were from Nigeria, one from Senegal and one from Indonesia.

For those not already in Nusakambangan prison island, where executions take place, drug convicts are usually transferred to the island a few days before they are to face the firing squad.

Their families, and embassies for foreign nationals, are given just 72 hours notice before the executions.

The 4 that were executed were Indonesian drug lord Fredi Budiman, and alleged drug traffickers Osmane Seck of Senegal, Humphrey Ejike from Nigeria, and Michael Titus Igweh also from Nigeria.

31 other individuals were said to have witnessed the executions including members of the police, the Attorney General’s office, spiritual advisers, and at least one embassy representative, among others.

How is the death penalty carried out?

This is how executions in Indonesia take place, according to the law, specifically regulated in Article 15 Perkapolri 12/2010:

1. The convict is given clothing that is clean, simple, and white before being taken to the place or location of the implementation of capital punishment. The convicted person, en route to the shooting spot, may be accompanied by a priest or spiritual adviser.

2. Two hours before execution, the execution team must already be set up. The firing squad is ready on site one hour prior to the execution and gathered togethered in a prep area. They will have prepared 12 long-barrelled guns, positioned within 5-10 meters of the pole where the person will be tied for execution.

3. When all preparations are set, the Acting Commander reports the readiness of his team. There is then a final examination by the Execution Team Leader of the weapons that will be used and of the preparations.

4. When the Execution Team Leader is content, the Acting Commander then orders his shooters to fill 12 rifles with ammo. Of the 12, only 3 will have live ammunition while the 9 others will not. The rifles will have one bullet each. This is to rid the shooters of guilt, so the shooters will not know whether it was them who killed the convict.

5. The convict is then brought out by a team to the shooting location. Handcuffs are released and the convict’s hands and feet are tied to the execution poles. The convict could be in standing, sitting or kneeling position.

6. The convict is then given a last chance to calm down for a maximum of 3 minutes. At this time, they could be accompanied by a priest or a spiritual adviser.

7. When the convict is ready, his or her eyes are covered with black cloth, unless the convict refuses.

8. The convict’s white clothing is then marked in black right on his or her heart, as the shooting target.

12. When the shooting is finished, the Acting Commander, the Team Leader, and the doctor check the condition of the convict and if, according to doctors, the convict is still showing signs of life, the Attorney Executor and Acting Commander order another shooting.

13. The Acting Commander orders the commander of the firing squad to shoot the convict on the temple, right above the ear. The shooting can be repeated as long as there is sign of life, according to the doctor.

14. The implementation of the death penalty is declared finished, if the doctor has stated that there are no more signs of life in the convict.

15. Once done, the firing squad commander orders its members to release the magazine and empty their weapons. The Acting Commander then declares to the Execution Team Leader, “The death penalty has been delivered.” 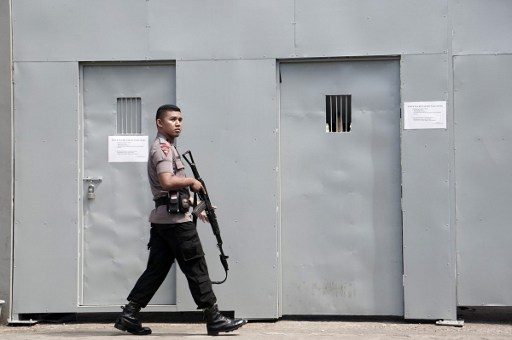 After execution, the bodies are then taken away and identified by family, who have been transported to Nusakambangan island. For those without family, their spiritual advisers are the ones that await the body.

The bodies are then transported by ambulance to funeral homes, before being taken home by families for their respective funeral services.

International human rights organizations and other countries have condemned Indonesia’s capital punishment, as international law has prohibited the death penalty for drug-related offenses. Hours after the execution, Indonesia said it would review its death penalty.

“The government is taking everything into consideration, because this is not an enjoyable thing to do,” said Cabinet Secretary Pramono Agung.

In the last round of executions, the AFP reports that the shooting spot was in a clearing, in the middle of the jungle.

The other 10 drug convicts who were spared were not notified until 6am that they would no longer be executed – about 4 hours after the government announced to the public they were only going to execute 4. The convicts waited 6 hours for their turn, according to Arinta Dea Dini Singgi, the lawyer of Merry Utami. Utami, the only Indonesian woman from this group of convicts that were scheduled to be executed, was spared.

Of the 4 that were executed, one, Nigerian Humphrey Ejike, was cremated. The other two were sent back to their country of origin, while Budiman, the lone Indonesian, returned to Surabaya where he is originally from. This was his final request.

ABC News Australia quoted Father Charles Burrows, a Catholic priest based in Cilacap who spoke with the convicts before their death, said some of the convicts took up to “15 minutes” to die.

He said he and some other spiritual advisers “were given some minutes to talk to the prisoners or console them somewhat.”

Some were also consoled while already tied to the pole, then the convicts “were shot pretty quickly after that.”

“There was a lot of anger in the first (executions), not last night,” he said. “They realize they’re going to die, so you best try and die with dignity.” – Rappler.com