Taiwan apologizes to indigenous people for the first time 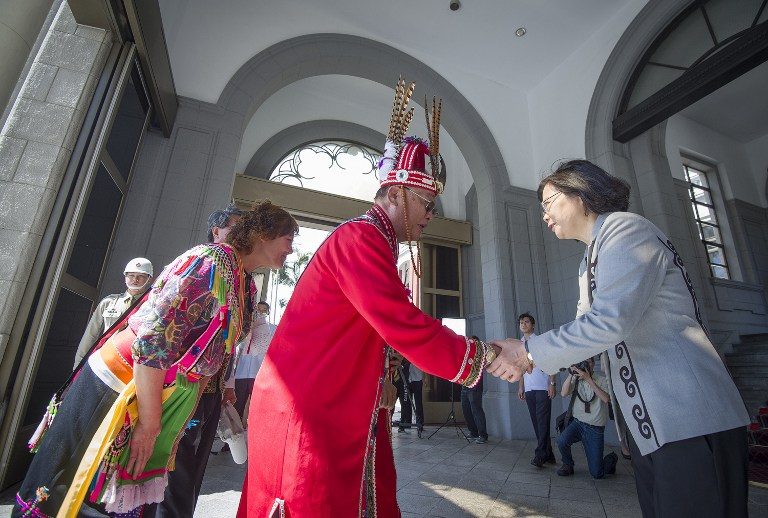 Facebook Twitter Copy URL
Copied
President Tsai Ing-wen, the island's first leader with aboriginal heritage, will personally head a committee to investigate past injustices as part of government efforts to ease tensions with the native community

TAIPEI, Taiwan – Wearing traditional dress from feather headdresses to loincloths, members of Taiwan’s indigenous community met President Tsai Ing-wen Monday, August 1, as she made a landmark apology for centuries of suffering including the loss of ancestral lands.

Tsai, the island’s first leader with aboriginal heritage, will personally head a committee to investigate past injustices as part of government efforts to ease tensions with the native community.

“I apologize to the indigenous people on behalf of the government, offering our deepest apology for the suffering and injustice you endured over the past 400 years,” she said in speech.

“We need to look at history seriously and speak the truth,” she said, adding that apologizing was “another step forward”.

The indigenous community – which makes up about 2% of Taiwan’s 23.5 million people – have seen their traditional culture eroded since immigrants started arriving from China centuries ago.

Much of their land is now designated national park, leading to clashes over hunting, fishing and foraging in areas where permits are needed.

Aboriginals have also complained of developments on their ancestral land, which campaigners say make up 2/3 of the island, were approved without seeking their views.

But for dozens of aboriginals protesting outside the presidential office Monday morning, her promises were not enough.

“The apology was well said and very touching, but her proposals for action don’t meet our expectations,” said Mayaw Biho, an indigenous activist from the Amis tribe, who had camped out overnight.

Since coming to power in May, Tsai’s Democratic Progressive Party (DPP) has not made legislation promoting indigenous rights a priority in parliament, he said.

Indigenous people remain a marginalized group in Taiwanese society, with wages about 40 percent below than the national average, as well as a higher rate of unemployment.

“We have been protesting for over 30 years,” said Capen Nganaen, an 80-year-old Yami representative wearing a loincloth, who spoke after Tsai.

“I hope Taiwan’s government and the president will truly deliver on the promises made in this apology,” he said.

Tsai and the DPP came to power after winning a landslide victory in January over the Kuomintang (KMT).

The Indigenous Peoples Basic Law was adopted in 2005, during the DPP’s last reign, but critics say actions to amend relevant laws have stalled.

This means many aboriginals have been arrested or fined for “illegal” hunting or fishing, which is allowed in the basic law.

Earlier Monday, tribe members who had been invited to Tsai’s speech burned millet stalks in front of the presidential office as part of a traditional ceremony welcoming the ancestral spirits to join them.

Tsai greeted the representatives from each of the island’s 16 recognized tribes, who were all wearing their traditional tribal clothing.

In a deviation from her usual plain blazers, Tsai wore a grey suit made by an indigenous designer, which featured a black butterfly pattern. – Rappler.com