Indonesia to sink scores of boats in fishing fight 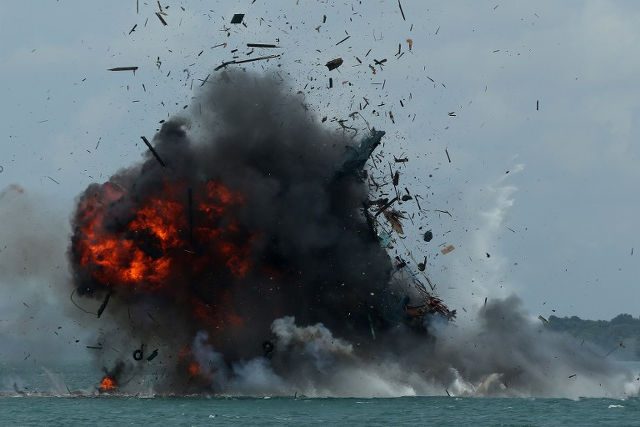 Facebook Twitter Copy URL
Copied
Boats from a number of countries, including China, Thailand, Vietnam, the Philippines and Malaysia, are already sunk as part of the campaign

JAKARTA, Indonesia – Indonesia will sink up to 71 impounded foreign boats this month on its Independence Day, a minister said Monday, August 1, ramping up a campaign to deter illegal fishing in its vast waters.

The world’s biggest archipelago nation has been seeking to stop foreign vessels fishing without permission in its territory, with President Joko Widodo claiming it costs the economy billions of dollars annually.

So far 176 foreign boats captured fishing illegally have been sunk – after the crews were removed – since Widodo took power in 2014, with some blown up in spectacular public displays.

Fisheries Minister Susi Pudjiastuti, who has been leading the campaign, said up to 71 foreign boats caught illegally fishing would be sunk on August 17, the 71st anniversary of Indonesian Independence.

She said that they would be sunk at various locations across the country, without specifying which countries the boats were from.

Boats from a number of countries, including China, Thailand, Vietnam, the Philippines and Malaysia, have already been sunk as part of the campaign.

The boats to be sunk later this month will be scuttled and not blown up, Pudjiastuti said. Green groups had complained about the environmental impact of blowing up boats.

The plan comes at a time of high maritime tensions between Beijing and Jakarta after repeated clashes in waters around Indonesian islands in the hotly disputed South China Sea. – Rappler.com