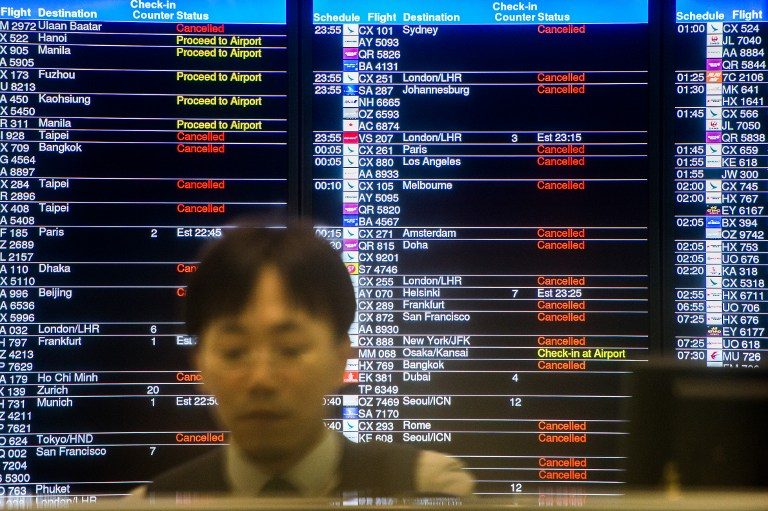 Facebook Twitter Copy URL
Copied
Gusts of 151 kilometers (93 miles) per hour whipped the city and rain lashed down during the night, and authorities warned of floods and landslides

Gusts of 151 kilometers (93 miles) per hour whipped the city and rain lashed down during the night, and authorities warned of floods and landslides.

Streets were deserted Tuesday morning as school was suspended and workers stayed at home, with buses and trains operating only a very limited service.

Hundreds of flights were axed after the storm swept past Hong Kong late Monday evening, August 1.

An airport authority spokesman told Agence France-Presse only 200 flights will run between 6 am and 6 pm local time on Tuesday (2200 GMT on Monday to 1000 GMT). On a normal day, the airport would handle 1,100 flights.

More than 150 flights had already been cancelled Monday as Nida approached, leaving stranded passengers to sleep on the floor in the departure hall.

“I came here at 6 am but the counters have closed… there have been no notifications at all,” one passenger bound for Australia told Now TV.

Hong Kong’s flagship carrier Cathay Pacific and its subsidiary Dragonair cancelled all of their flights in and out of Hong Kong for 16 hours, from 10:00 pm Monday until 2:00 pm Tuesday.

The stock market shut for the morning as the Typhoon 8 storm signal – the third-highest category – remained in place.

Around the city, more than 200 people sought refuge in government shelters as the rain poured down.

But dedicated fans of new augmented reality game Pokemon Go, which has many in the city glued to their smartphones even more than usual, wrapped up in waterproofs to keep hunting monsters as the storm blew in.

Southern China hunkered down as it braced for Nida to make landfall later Tuesday, with the city of Guangzhou issuing its first-ever red storm alert.

Anyone living in the storm’s projected path were told to prepare three days’ worth of food and other essentials, the official Xinhua news agency reported.

“It’s the strongest typhoon to hit the Pearl River Delta since 1983 and will bring severe flooding,” Xinhua cited local official He Guoqing as saying.

The cities of Zhuhai and Shanwei in Guangdong province also issued red alerts – the highest in China’s four-tier, colour-coded warning system. Shenzhen, where Xinhua reported the storm hit at 03:30 am, issued a yellow one, the third most severe.

All work, production, and classes in Guangzhou are suspended during the alert. Members of the public have been advised to stay indoors, Xinhua reported.

Guangzhou Railway Corporation said all trains departing from Guangdong would be cancelled on Tuesday, with hundreds of thousands of passengers affected.

More than 220 flights out of Guangzhou, Shenzhen and Zhuhai airports were cancelled before the storm hit Tuesday, the Sohu news portal said.

Nearly 2,000 workers constructing the Hong Kong-Zhuhai-Macau Bridge were evacuated and more than 2,000 others working on an offshore oil platform were relocated, Xinhua said.

Nida brought strong winds and torrential rains to the northern Philippines over the weekend, while southern China has already been hard-hit by storms this summer.

Super Typhoon Nepartak left at least 69 dead in Taiwan in July after making landfall in the mainland’s eastern province of Fujian – despite being downgraded to a tropical storm. – Rappler.com