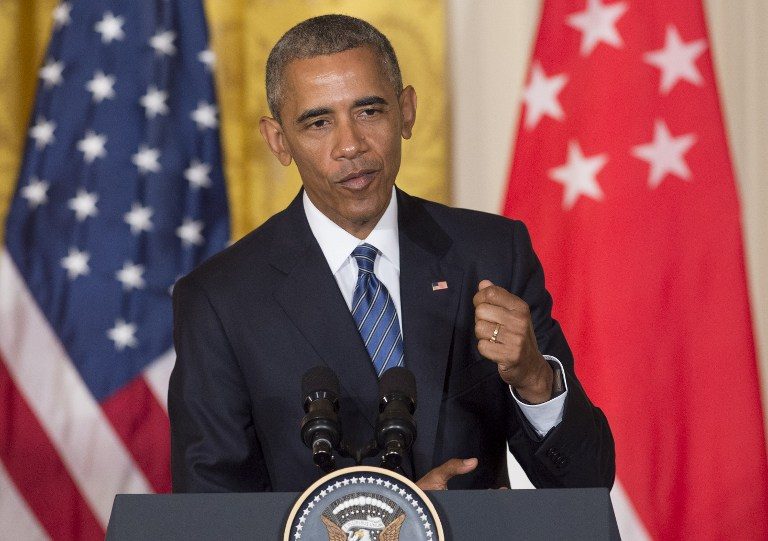 Facebook Twitter Copy URL
Copied
Obama said the vexed Trans-Pacific Partnership was part of the answer to questions like 'how do we make sure that globalization, technology, automation, those things work for us, not against us?'

Painting the 12-country pact – which does not include China – as part of a battle with Beijing for regional influence, Obama also warned strengthening anti-trade forces that they could not roll back the tide.

The pact is strongly backed by the White House – where it is seen as a key part of Obama’s “pivot to Asia” – but is opposed by both presidential candidates, Hillary Clinton and Donald Trump.

It has yet to be ratified by Congress, where legislators have one eye on the November elections.

“Right now I’m president, and I’m for it,” Obama said tersely, indicating a fresh push to get it passed before he leaves office in January.

“If we don’t establish strong rules, norms for how trade and commerce are conducted in the Asia-Pacific region, then China will,” Obama said as he hosted Singapore’s Prime Minister Lee Hsien Loong at the White House.

“We are part of a global economy. We’re not reversing that. It can’t be reversed.”

Instead, Obama said the vexed Trans-Pacific Partnership was part of the answer to questions like “how do we make sure that globalization, technology, automation, those things work for us, not against us?”

In a pitch to the political left, he also said that because of TPP, labor standards in Vietnam were improving and Malaysia was more seriously tackling human trafficking.

Lee gave Obama some political support, calling for the deal to be passed and warning America’s reputation in the world was “on the line.”

“If at the end waiting at the altar the bride doesn’t arrive, I think there are people who are going to be very hurt – not just emotionally but really damaged. For a long time to come.”

With remarkable candor, Lee said rejecting the TPP would hurt not just Japanese leader Shinzo Abe but security relations with Japan, one of a number of countries in Asia that the United States is treaty-bound to protect.

Lee said that countries like Japan would rethink whether America’s military support could be guaranteed.

“It’s an absolutely serious calculation which will not be said openly, but I have no doubt will be thought,” he said. – Rappler.com