How an Indonesian student scored a Google internship 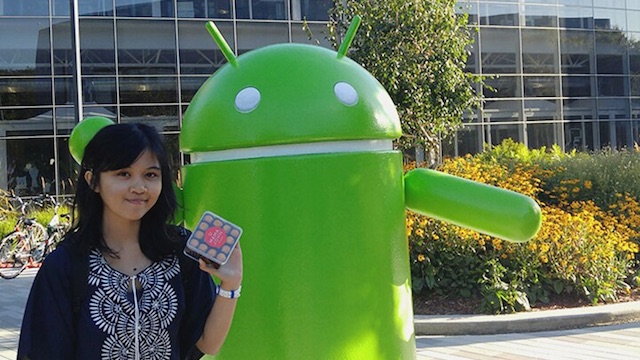 She’s interning in the research and machine intelligence department at Google’s headquarters in Mountain View.

“I can’t really talk a lot about what I do here,” she tells me, since interns sign a nondisclosure agreement. “My team is working on something that is important for Google’s natural language processing.”

It’s already her second time at a Silicon Valley company, though she isn’t even done with university yet.

The year prior, she did a 3-month internship at Square, assigned to work on a recommendation engine for a food delivery startup recently acquired by the payment company.

Soaking up all the cool Silicon Valley stuff – multiple healthy food options on campus, office outings by boat, foam sword fights – is one thing, but the stints at tech companies in the Valley is another. Rakina siad it made her aware that she has a knack for artificial intelligence, specifically machine learning.

She hopes she can work in the US full time one day, but for now she needs to wrap up her studies at the University of Indonesia. She’s looking for opportunities with local startups to keep herself busy in her final year.

Rakina sounds extremely focused, but says she started out like any other student: “mostly clueless.”

Determination and clever planning got her ahead. Here’s how she did it.

1. Get over initial setbacks

Rakina knew she wanted to work at a Silicon Valley company eversince she was in high school, but unlike other teens she acted on the idea instead of harboring it as some secret fantasy.

“When I started freshman year at university, I [took] steps to realize that dream,” she recalls.

She participated in coding challenges, built websites and decided to give the real thing a shot. “I applied to some big companies’ career sites and did not hear back from any of them.”

This setback might have led some to give up, but Rakina thought about how she could improve her chances of getting noticed.

“I ended up spending my freshman year summer contributing to open source projects and coaching Jakarta’s informatics Olympiad team so that I would have better experiences to put in my resume,” she recalls.

“It was the first year of that program, and to me it was the answer to my dream,” Rakina says.

She wasn’t shy to ask more experienced people for help. “I immediately applied and luckily got accepted and paired with [a] mentor.”

What followed was a series of mock interviews and hours of practice.

“I practiced every week and was constantly reading interview stories and questions,” Rakina says.

She also had to overcome her shyness. “I couldn’t even handle a call or video call for more than 5 minutes, so having technical interviews of 45 minutes or more was very challenging.”

Rakina then applied to a wide range of companies, not just her top choices. She also asked for referrals from her mentor.

“I applied to companies that I never thought about before, unlike the previous year.”

Eventually, she did get some positive feedback and then had to decide on which internship would suit her best. She settled on Square.

“I was very impressed by the interviewers from Square, who seemed genuinely interested in what I did.” They were also generous with tips, which led her to believe that the startup would be a good place to learn.

6. Build on your experience

After Square, she could have told herself: been there, done that. But Rakina was determined to make the most of her time at uni, so she applied for another summer internship. This time she applied without the help of a mentor and got replies from companies like Uber, Dropbox, and Google. She settled for the offer from the latter.

“I guess it’s easier now that I have Square in my resume, so I got a reply a few days later. I got set up for two phone interviews and did well.”

7. Keep learning, inside and outside of the company

When she got to Google, Rakina realized she wouldn’t just learn coding, but take home a range of new experiences if she immersed herself in the culture outside of the office.

“When I’m not coding, I’m attending one of many activities that Google set up for their interns and employees, like sports, tech talks, classes, and even employee parties,” she says. She went camping in Yosemite with one of her co-workers and his family.

“What impressed me about Silicon Valley: They live and breathe tech here! The culture is really progressive, fun, and healthy. Everybody works out and eats healthy food.” – Rappler.com

This article was first published on Tech in Asia.