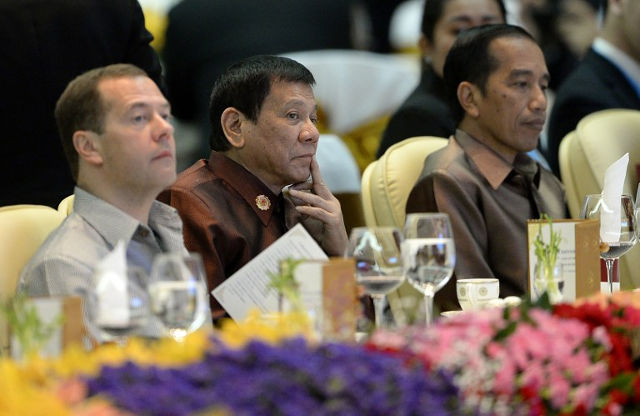 The Philippine Office of the President earlier said Duterte will be seated between US President Barack Obama and UN Secretary-General Ban Ki-moon at the Association of Southeast Asian Nations (ASEAN) gala dinner on Wednesday.

Duterte and Obama, however, “briefly spoke” at a holding room before the dinner, according to Philippine Foreign Secretary Perfecto Yasay Jr.

In a news release earlier on Wednesday, the Philippine Office of the President said: “Presidents Duterte and Obama will be seated next to each other, which expectedly, will focus all cameras on them to deliver to the world the encounter of the two. Incidentally, United Nations Secretary-General Ban Ki-moon is also seated on the other side of President Duterte.”

On what to expect during Duterte and Obama’s meeting on Wednesday evening, Communications Secretary Martin Andanar told reporters: “It’s difficult to speculate, but certainly they will have their drinks and food together.”

Referring to the Duterte-Obama meeting, Presidential Spokesman Ernesto Abella added, “In a meeting like this, there is always an opportunity for warmth and civility.”

Duterte has criticized Obama for planning to discuss human rights with him. The two leaders had been supposed to meet, but Obama cancelled their meeting after Duterte hit the US president.

Duterte has since apologized for his “strong comments,” through a statement released to the media.

The Philippine leader has also detested Ban’s remarks on extrajudicial killings in the Philippines.

Duterte even threatened to leave the UN because of his “frustrations” with the international body. The Philippine Department of Foreign Affairs, however, clarified that the Philippines remains “committed” to the UN. – Rappler.com