Sep 9, 2016 2:38 PM PHT
Natashya Gutierrez
Facebook Twitter Copy URL
Copied
(3rd UPDATE) Philippine President Rodrigo Duterte also says he does not 'give a shit' about what the international community thinks of him 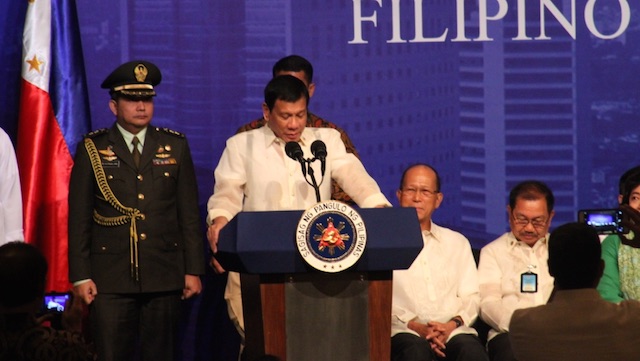 But in the same speech in front of the Filipino community on Friday, September 9, he also attacked the United States for previous brutalities and praised China.

On Friday, September 9, Duterte said: “I never confronted Obama here. I do not know him.”

He was referring to news headlines that said he cursed at Obama and called the US leader a “son of a whore,” when he was asked by media about the possibility of being questioned on extrajudicial killings by the United States. The statements prompted the US side to cancel the bilateral talks on the sidelines of the ASEAN summit in Laos.

“It’s like this. These yellow [allies]….and those from the [US] State Department, when you see the Philippine news, they were trying to crucify me for the extrajudicial killings. Sabi [They said] I will be investigated by the International [Criminal] Court.”

“Yellow” is used in Philippine politics to refer to supporters of former president Benigno Aquino III and his allies.

He said that his actual response was, “I will not answer to anybody but the Filipino people.” (READ: TRANSCRIPT: Duterte on Obama)

Duterte went on to explain that the translation of his cussing was not “son of a whore” but “son of a gun” or “son of a bitch,” and was used in the same context as Americans say it in everyday language.

“Pangkaraniwan ‘yan (It’s common). Everybody, whether American, African who knows English would say, ‘son of a bitch,’ ‘son of a gun.’ It is not ‘son of a whore,’ that is never the translation,” he said.

He added: ‪”At itong mga Amerikano, mahusay talaga (These Americans are really good). The Americans can spin a story. They use the predicate or the adjective that is really worst to hear.”

Duterte also blamed the media who, he said, spun the story, and has helped in giving him a negative reputation among world leaders – not that he cared, he added.

“They can spin everything. Me? I don’t give a shit. Because I’m not the president of the international community,” he said.

He said he denied having cursed Obama when he had that brief interaction with the US leader prior to the ASEAN gala on Wednesday.

“Kaya sinabi ko doon sa (I told him at the) holding room, ‘President Obama I’m President Duterte. I never made that statement, you can check it out.’ [Obama said] ‘My men will talk to you.’ Sabi ko (I said), ‘Okay,'” Duterte recalled their exchange.

Duterte said he just wanted the issue to be over, as he maintained that he never cursed Obama. He then made a derogatory remark against the US State Department.

The United Nations chief, whom he personally met for the first time and shook hands with in Laos, did not escape the Philippine leader’s acid tongue. In early June, before Duterte assumed the presidency, Ban Ki-moon strongly condemned the then incoming president’s apparent support of extrajudicial killings, voicing particular concern over his comments seen as justifying murdering journalists.

Duterte also confirmed previous reports that he presented photos of the massacre of Filipinos in Mindanao at a plenary of the East Asian Summit on Thursday, September 8 – photos from when the Philippines was a US colony. (READ: Obama, Duterte clash over brutal crime war)

Among those at the meeting were Obama and Ban.

He said he was handed a speech but he dropped it to show photos, since he said the issue on human rights was raised anyway.

These were pictures of corpses during the US pacification campaign in Mindanao that killed Muslim Filipinos in the early 1900s, he said.

He said he told the body: “This is human rights. What do you intend to do? Do not tell me that is water under the bridge. Human rights violation, whether committed by Moses or Abraham, is still a violation of human rights.”

Duterte said there was just silence. He said he was “waiting for Obama to respond” but he did not.

He went on to blame the Americans for continued suffering in Mindanao.

“Why has there been no healing in Mindanao? Because they were slaughtered by the imperialists!” he said.

Duterte said none of the Philippine officials who were with him at the EAS plenary knew he would cast aside his speech. “They were squirming at first,” the Philippine leader said.

After attacking the United States, Duterte then went on to praise China for what he called its “generosity” to the Philippines.

Duterte did not give any specifics on amount or dates, but reiterated China’s pledge to help the country in its drug war.

“What am I supposed to do? China helped to build rehab (centers). They’re bringing materials. Only China is helping us,” he said.

He went on: “Next year there will be (rehabilitation centers). We’re preparing it now. China is helping us. I would like to thank China for being so generous.”

Duterte said there are currently no rehabilitation centers because the budget he inherited from the Aquino government was small.

“It seems to me that everybody’s scared, there is not even a decisive move in the South China Sea. There, we can only have two options there: We talk or we fight. Philippines to fight China, it will be slaughter so we talk. We cannot match,” he said.

He then “thanked” the US for its defense assistance, but the statement was tinged by sarcasm, as he quickly added that it was all for show.

“We have received so many things from America. Thank you for your generosity. What they sold us, two, only two FA-50 (fighter jets).  It’s FA-50 but they never gave us the missiles and the bullets and the cannons to fight. For ceremonial lang (only),” he said of the help of the Philippines’ treaty partner.

Duterte said the US “just gave you principles of law and nothing else.”

It turns out, however, that the FA-50s criticized by the President are from South Korea, not the US.

Duterte’s attitude towards the US and China is markedly different from his predecessor, Aquino, under whose administration the Philippines inked with the US the Enhanced Defense Cooperation Agreement (EDCA) which was upheld by the Philippine Supreme Court in January this year.

EDCA is an executive agreement that gives US troops, planes, and ships increased rotational presence in Philippine military bases, and allows Washington to build facilities to store fuel and equipment there.

It was signed against the backdrop of the Philippines’ maritime dispute with China over the West Philippine Sea, and America’s commitment to come to its ally’s defense in case this escalates.

The verdict by an arbitral tribunal in The Hague, the Netherlands said China’s claims to most of the waters – through which $5 trillion in global shipping trade passes annually – had no legal basis.

It also said that a massive burst of artificial island-building activity undertaken by China in recent years in a bid to bolster its claims was illegal.

China angrily vowed to ignore the ruling, describing it as “waste paper,” even though it had legal force through the United Nations Convention on the Law of the Sea.

China was at odds with the Aquino administration for bringing the case before an arbitral tribunal – and even winning the case. China has expressed optimism of forging better ties with the Duterte administration which has taken a different approach in its dealings with the regional giant. – Rappler.com