Florida battens down the hatches as Hurricane Matthew closes in 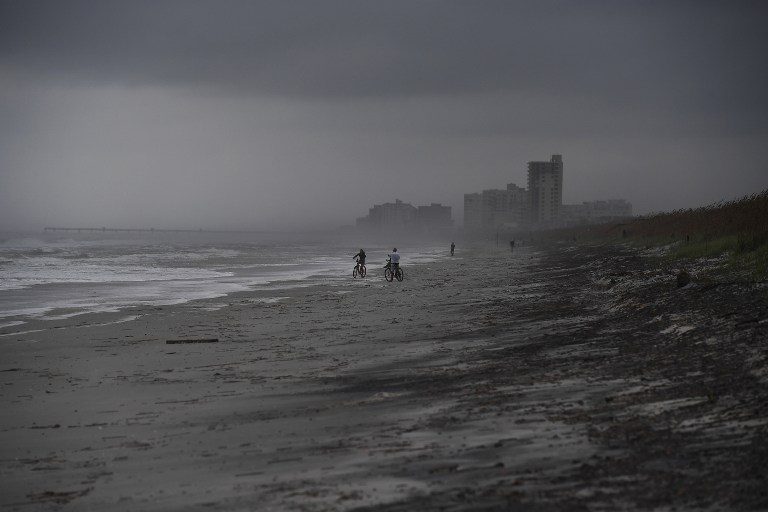 Facebook Twitter Copy URL
Copied
The storm is expected to hit Florida's east coast on Thursday night, October 6, as a Category 3 or 4 – a major hurricane in either case

DAYTONA BEACH, Florida, USA – The sun was shining in Florida on Wednesday, October 5, but all the talk was about Matthew, a monster hurricane roaring north from the Bahamas that threatens to pummel the coast with winds of 120 miles (195 kilometers) per hour.

As residents of a subtropical state, Floridians know what to do with a storm barreling in. Authorities acted in haste, opening shelters for people and pets, distributing free sand bags, and suspending toll charges on the highways.

On Wednesday morning, residents of Volusia County in central Florida received the formal warning on their mobile devices, a haunting and urgent message that a hurricane was on the way.

“I cannot emphasize it enough that everyone in our state must prepare now for a direct hit,” said Florida Governor Rick Scott, as evacuation orders were issued – some voluntary, some mandatory – across different parts of the state.

The storm is expected to hit Florida’s east coast on Thursday night, October 6, as a Category 3 or 4 – a major hurricane in either case.

Beaches sat empty, theme parks were on high alert, and schools and universities closed for the rest of the week, with gas station lines starting to form as some residents prepared to head west.

‘Florida has been here before’

In Daytona Beach – a tourist town northeast of Orlando – waves of 3 feet (a meter) high or more lashed the coast. Canned food began to disappear from store shelves but there were no orders to evacuate.

“We’re not really afraid, Florida has been through this thing for years,” said Rick Basel, 63, a retiree who was loading his car with enough food and water from the supermarket to last 3 or 4 days.

Despite the sense of calm, Floridians prepared for a battle.

On one coastal boulevard, a woman named Linda Kaplan hammered wooden planks over the windows, saying they were the same ones she used to protect against 2004’s Charley, the last hurricane that tore through here.

“We’re hoping this time it skirts and misses us,” she said.

Normally teeming with tourists, Daytona Beach was deserted. It was a bad day for business, said one barista.

Over the course of the day, 50 to 100 people circled a giant mound of sand, shoveling it into bags to be tucked into doorways and garage openings – a scene reminiscent of a child’s piñata party.

Cedrik Davis, a worker drenched in sweat from the manual labor of the task, said he planned to stay and protect his home, even if evacuations were ordered.

“I believe in God, everything will work out,” he said.

According to the National Hurricane Center, Matthew was expected to strike eastern Florida as a major Category 3 hurricane or stronger after leaving the Bahamas.

The warning extended from Golden Beach, some 21 miles (34 kilometers) north of Miami, all the way to Flagler and Volusia Counties in central Florida.

To the south, a tropical storm warning was issued for the Miami area and westward across the Everglades to the Gulf Coast of Florida.

Northern Florida and parts of Georgia were under a hurricane watch, meaning severe winds and rain were possible by late Friday.

In the terminology of the NHC, a “warning” means conditions are imminent, while a “watch” means they are possible in the next 48 hours.

Matthew hit Cuba and Haiti as a Category 4 storm, and by Wednesday evening was taking aim at the Bahamas as a slightly weaker – but still powerful – Category 3. – Rappler.com