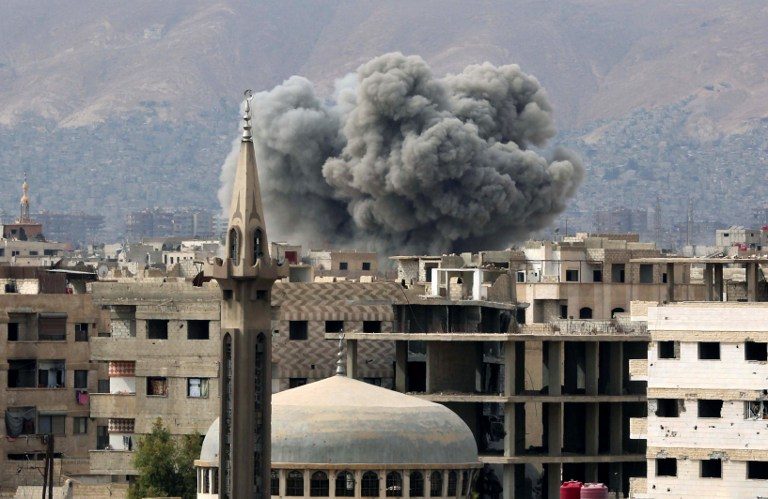 Facebook Twitter Copy URL
Copied
(UPDATED) The meetings come after Syria was plunged into some of the worst violence it has seen, as government forces backed by Russian airpower push a brutal assault on rebel-held eastern Aleppo

Syria has been plunged into some of the worst violence of the 5-year civil war after a hard-won truce collapsed as government forces backed by Russian air power push a brutal assault on rebel-held eastern Aleppo.

As the West accused Russia of potential war crimes over the bombing campaign, Moscow and Washington froze talks, trading blame for the collapse of the ceasefire they had brokered.

There is now a push to give diplomacy another chance with Washington announcing Wednesday two days of talks – in Lausanne on Saturday, October 15, and in London on Sunday, October 16.

US Secretary of State John Kerry and Russian Foreign Minister Sergei Lavrov are expected to be joined in Lausanne by counterparts from Turkey, Saudi Arabia and Qatar – all backers of Syrian opposition forces.

Neither side has confirmed an invitation to Iran, a key player in the conflict and an ally of Syrian President Bashar al-Assad.

Then in London, Kerry will likely meet up with his European counterparts – from Britain, France and Germany.

The United Nations said Syria envoy Staffan de Mistura has been invited to take part in the talks but a spokesman said he did not know if he would attend.

Lavrov told CNN in an interview Wednesday, October 12, that he hoped the weekend talks in Switzerland could help “launch a serious dialogue” based on the now-defunct US-Russian pact.

“We would like to have a meeting in this narrow format, to have a businesslike discussion, not another General Assembly-like debate,” Lavrov said.

The floor of the General Assembly was the scene of a stormy weekend meeting as Russia vetoed a resolution on a ceasefire.

Russian President Vladimir Putin slammed Paris for the vetoed proposal, accusing it of deliberately putting forward a motion that Moscow would reject.

“It was aimed at inflaming the situation and fanning hysteria around Russia,” Putin said.

New Zealand on Wednesday presented another draft resolution demanding an end to air attacks in Syria’s battleground city of Aleppo – likely to again fan tensions between the West and Russia, who back opposing sides in the suppurating civil war.

Fresh air strikes and artillery fire in Aleppo on Wednesday left at least seven people dead, an international monitor said, a day after Russia was accused of stepping up its raids on the city.

The United Nations has warned of the unfolding humanitarian catastrophe taking place in Aleppo, saying that the rebel-held territory could be destroyed entirely by the end of the year.

Despite the continuing exchange of insults, the negotiations had never really stopped behind closed doors, with Kerry and Lavrov speaking by telephone in recent days.

State Department spokesman John Kirby said Wednesday that for Kerry, the bilateral talks had been suspended but were “not dead.”

Kirby also emphasized the importance of both tracks of talks – with Russia, which has “the most influence on Assad,” and with other regional players with “influence on other units.”

But hopes remain low for a breakthrough to end the 5-year conflict that has claimed some 300,000 lives.

Some have even called for punitive measures against Moscow, though French Foreign Minister Jean-Marc Ayrault cautioned against “a cycle of sanctions for the sake of sanctions.”

Putin on Wednesday warned Western countries against imposing sanctions, stressing that Russia would not let itself be isolated.

“We should not go down the path of pressure and blackmail but search for compromise,” Putin said in Moscow.

He also placed blame on the West for the dire situation.

“I am deeply convinced that it is our Western partners, first and foremost of course the United States, who are responsible for the situation,” he told France’s TF1 television. – Rappler.com