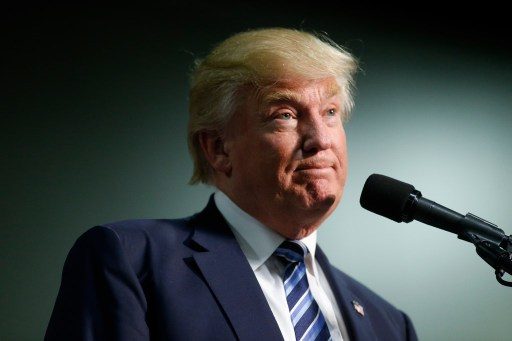 WASHINGTON DC, USA – Donald Trump on Friday, October 14, sarcastically dismissed women accusing him of sexual misconduct – even as two more came forward with lurid accounts – and denounced what he called an international political and media plot against him.

President Barack Obama warned meanwhile that America’s very democracy is at stake in the November 8 election because of the Republican presidential candidate.

As Trump spoke at a rally, Summer Zervos – an ex-contestant on his reality TV show “The Apprentice” – came forward to accuse him of kissing, groping and thrusting his genitals at her during a meeting at a California hotel in 2007.

The Trump campaign said in a statement that he “vaguely remembered” Zervos and that she continued to email his office for help after the show ended, but shot down her accusation.

Also Friday a former aspiring model, Kristin Anderson, told the Washington Post that Trump had sidled up to her in a nightclub in the early 1990s, reached under her skirt and touched her vagina through her panties.

They were the latest in a stream of women accusing Trump of predatory sexual behavior, adding to the woes of his now free-falling presidential bid.

“I take absolutely no satisfaction in what is happening on the other side with my opponent,” she told a crowd at a campaign field office in Seattle, Washington. “I am not at all happy about that.”

“It hurts our democracy.”

The torrent of allegations against Trump was unleashed by last Friday’s release of audio from 2005 in which Trump bragged that he could get away with grabbing women’s crotches because he’s famous.

“I love those signs, ‘Women for Trump,'” he told another crowd later in Charlotte.

“I actually think I’m doing well with women,” Trump said, as a smiling blond woman in an iridescent silver top hoisted up a poster.

The latest Quinnipiac poll has the Republican candidate trailing his Democratic opponent among women voters by 20 points.

In Greensboro, Trump also had words for Jessica Leeds, who said he groped and kissed her as they sat next to each other on a plane in the 1980s.

Said Trump: “Believe me, she would not be my first choice, that I can tell you,” eliciting laughter from the crowd. (READ: Crisis-plagued Trump apologizes for lewd talk about women)

“The corrupt media is trying to do everything in their power to stop our movement,” Trump said.

“Carlos Slim as you know comes from Mexico. He’s given many millions of dollars to the Clintons and their initiative,” Trump said alluding to the Clinton Foundation.

Slim’s son-in-law and spokesman, Arturo Elias, said Slim has never met Trump and “is not interested in his personal life in the slightest.”

In reference to Clinton’s accusation that Trump was “stalking” her during the debate last Sunday, October 9, the bombastic Republican told his supporters she had simply walked in front of him.

“When she walked in front of me, believe me, I wasn’t impressed,” he said, appearing to hint at the Democrat’s physique.

Obama, campaigning for Clinton in Cleveland, warned that much is at stake in the election.

He blasted Trump as a dictator-in-the-making, but also voiced concern about how Trump’s legion of supporters might react to defeat.

“Democracy itself is on the ballot right now.”

As his poll numbers slip Trump has been claiming that the media and a “global elite” are working against him.

“Hillary Clinton meets in secret with international banks to plot the destruction of US sovereignty in order to enrich these global financial powers, her special interest friends and her donors,” Trump told supporters in Florida.

“C’mon man!” he said, ridiculing Trump’s repeated claim that the election is “rigged.”

“You don’t start complaining about the refs before the game’s even done,” Obama said. “You just play the game, right?”

Many elected Republican officials, worried about their re-election prospects, have distanced themselves from Trump. (READ: John McCain pulls support from Trump after lewd comments)

Some, though, have since reversed their stance, citing fears that Clinton’s appointments as president would move the Supreme Court sharply to the left. – Rappler.com