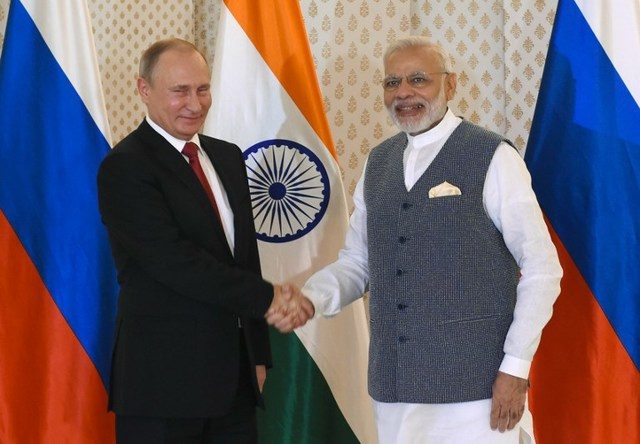 BENAULIM, India – India on Saturday, October 15, backed Russia’s efforts to bring about a settlement in war-ravaged Syria, the leaders of the two traditional allies said in a statement following their annual talks.

Russian President Vladimir Putin and Prime Minister Narendra Modi said they “condemned terrorism in all its forms”, during discussions in the Indian tourism state of Goa.

“The two sides are convinced that the conflict in Syria should be peacefully resolved through comprehensive and inclusive intra-Syrian dialogue … and relevant UN Security Council resolutions,” the joint statement issued after the talks concluded said.

“Both sides underlined the necessity of strengthening the cessation of hostilities (and) delivery of humanitarian aid to besieged areas.

“India recognized (the) Russian side’s effort towards achieving a political and negotiated settlement of the situation in Syria.”

The statement comes as fresh diplomatic talks to end the Syrian conflict got underway in Switzerland, the first since Washington halted negotiations with Moscow this month on efforts to revive a failed ceasefire.

Syria was plunged this month into some of its worst violence of the years-long war, as government forces backed by Russian airpower push a brutal assault on rebel-held eastern Aleppo.

Tensions are high between Moscow and the West, which has accused Russia of potential war crimes over its bombing campaign.

India has enjoyed a decades-long strong relationship with Russia. During the Cold War, non-aligned India developed closer ties with the Soviet Union, while the US allied with Pakistan.

In recent years New Delhi has cultivated deeper diplomatic and economic ties with Washington and Modi enjoys a strong relationship with US President Barack Obama. – Rappler.com