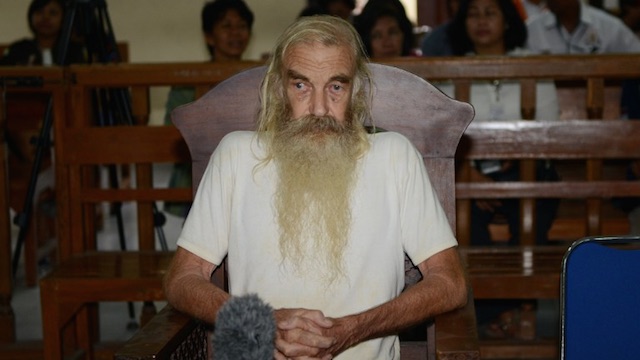 DENPASAR, Indonesia – An elderly Australian man was jailed for 15 years Tuesday, October 25, for sexually abusing Indonesian girls on the resort island of Bali after luring them to his house with promises of gifts.

Robert Andrew Fiddes Ellis was found guilty of abusing 11 girls since 2014 at the home where he was living on the island. The 70-year-old would bathe the children, aged between 7 and 17, and touch them inappropriately, prosecutors said.

“His actions could have damaged the victims’ futures,” said judge Wayan Sukanila, as he announced a guilty verdict and handed down the 15-year sentence at a court in the Balinese capital Denpasar.

The judge said the case could also taint the image of the Indonesian island, which attracts millions of foreign visitors each year, as a tourist destination.

Ellis, who has long, white hair and a big bushy beard, was arrested in January after a tip-off from local child protection officials and accused of luring the girls back to his house with promises of money and other gifts.

Last week the pensioner admitted to journalists at the court that he had bathed the girls in exchange for cash but insisted that he had done nothing wrong and it was “not a serious thing”.

After being convicted, the elderly man looked crestfallen and told journalists: “I’m 70 now, 15 years would take me to 85. I don’t know if I’ll live that long.”

Asked if he thought the court’s decision was fair, he said: “Well it doesn’t seem to be.”

His lawyer Yanuar Nahak said he would file an appeal as police had treated Ellis unfairly, only focusing their probe on him and failing to investigate two other people who had allegedly brought the children to the pensioner.

In addition to the jail sentence, Ellis was ordered to pay a fine of two billion rupiah (around $153,000) or serve an additional 6 months in jail.

Bali is a popular holiday destination for tourists from around the world, who flock to the island for its beaches, resorts and nightlife.

Ellis is not the first person to be jailed for child sex offenses. In 2009, 61-year-old Australian Philippe Robert Grandfield was sentenced to 8 years prison for paying underage boys for sexual favors. –Rappler.com