Oct 29, 2016 6:03 PM PHT
Agence France-Presse
Facebook Twitter Copy URL
Copied
'Some of our island states in the Pacific and the Caribbean will be hit first and potentially disappear, therefore climate change has been an issue of real importance to the Commonwealth,' says an official 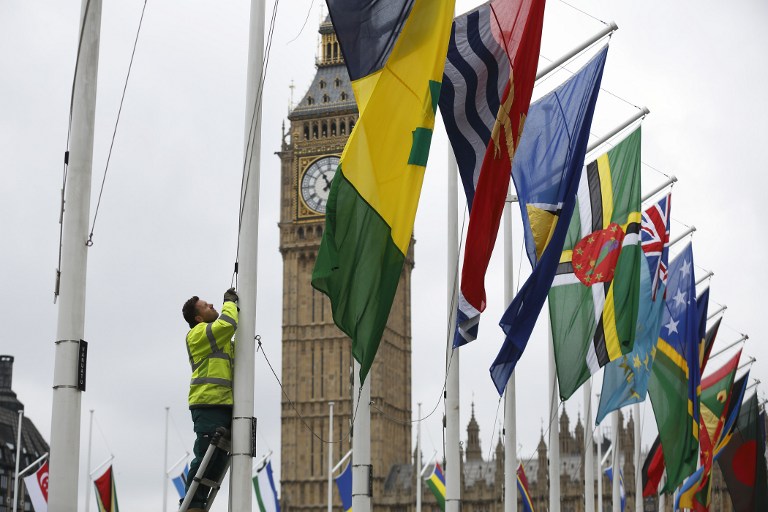 LONDON, United Kingdom – The Commonwealth is bringing together global experts to thrash out new ideas for not just reducing climate change but actually reversing its effects by mimicking success stories in nature.

At a two-day gathering on Friday and Saturday, October 28 and 29, at the 52-country organization’s headquarters in London, a diverse band of experts in fields such as biomimicry, carbon sequestration, design and regeneration traded ideas for practical schemes that could pull carbon out of the air and put it back into the Earth.

Rather than a series of presentations, the conference instead saw experts from around the world huddle in groups to brainstorm.

While the Commonwealth contains G20 industrial powers like Britain, Canada and Australia and emerging forces like India and Nigeria, many of its members are developing island microstates.

“Some of our island states in the Pacific and the Caribbean will be hit first and potentially disappear, therefore climate change has been an issue of real importance to the Commonwealth,” Commonwealth Secretary General Patricia Scotland told Agence France-Presse (AFP).

Examples were shared of concrete absorbing carbon, ecologically destroyed landscapes flourishing again through getting carbon back into the soil, and getting more productive agriculture through mimicking the ecosystems of wild, untended land.

There were discussions on buildings designed like termite mounds that ventilate themselves with cool air, or making ships’ hulls like shark skin.

Also mooted were vertical axis wind turbines arranged in school-of-fish formation so the ones behind gain momentum from the vortices, creating far more wind power than regular wind farms.

“It’s stunning, but this is not inventing anything new. Life’s been at it for 3.8 billion years,” biomimicry expert Janine Benyus told AFP.

“We’re talking about bringing carbon home – rebalancing the problem of too much carbon in the air and not enough in the soil,” she added, stepping out of a workshop.

With its diverse membership covering a quarter of the world’s countries, action within the Commonwealth often paves the way for wider global agreements.

The climate change accords reached at its biennial summit in Malta last December were instrumental in the Paris COP21 UN climate conference deal struck later that month, which agreed to cap global warming at less than two degrees Celsius (3.6 Fahrenheit) above pre-industrial levels.

Scotland will take forward ideas and outcomes from the London workshop to the COP22 summit in Marrakesh in November.

“We’re setting off the starter pistol for this race,” the secretary-general said.

“The Commonwealth is seeking to be the platform through which ideas can be transferred.

However, in the arena of climate change, many intriguing proposals get ditched on the grounds of cost, practicality or fears that they could end up inflicting environmental damage.

“We’re looking at how we can share real solutions and help each other to get there faster,” said Scotland.

Some sessions focused on so-called big picture ideas, looking at Earth as a complete system.

Delegates discussed how carbon can be used as a resource, in which returning it to the ground can bring about lasting soil fertility and jobs and thereby political stability.

“If we do a good job, we can find the funding because the will is there,” he told AFP.

“The time of ‘them and us’ thinking is past. The people who were against each other now have to come together.

“People are dying today from the effects of climate change. To them, it’s not an intellectual debate any more.” – Rappler.com