Oct 31, 2016 3:02 PM PHT
Agence France-Presse
Facebook Twitter Copy URL
Copied
Choi Soon-Sil – accused of fraud and meddling in state affairs – submits to prosecutors in Seoul a day after flying back to the country from Germany 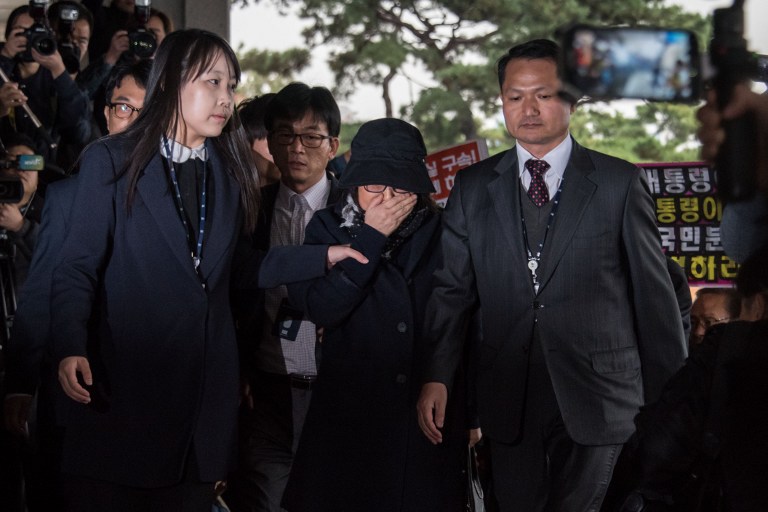 SEOUL, South Korea – South Korean prosecutors on Monday questioned the woman at the center of a political scandal that has shattered public confidence in President Park Geun-Hye, with allegations of fraud and meddling in state affairs.

In the wake of mass street protests in Seoul and other cities to demand Park’s resignation, Choi Soon-Sil – who has denied any criminal wrongdoing – submitted to prosecutors in Seoul a day after flying back to the country from Germany.

Park and Choi have been close friends for 40 years. The precise nature of that friendship lies at the heart of the current scandal which has triggered a media frenzy in South Korea, with lurid reports of religious cults and shamanistic rituals.

The media has portrayed the 60-year-old Choi as a Rasputin-like figure, who wielded an unhealthy influence over Park and interfered in government policy despite holding no official post and having no security clearance.

Suggestions that Choi vetted presidential speeches and was given access to classified documents has exposed Park to public anger and ridicule and, with just over a year left in office, pushed her approval ratings off a cliff.

A task force, led by the head of the powerful Seoul Central District Prosecutor’s Office, has been set up to investigate the leak of presidential documents and whether Choi meddled in state affairs.

Choi has also been accused of using her relationship with the president to coerce corporate donations to two non-profit foundations, and then siphoning off funds for her personal use.

“We hope that the various allegations can be thoroughly verified,” presidential spokesman Jung Youn-Kuk told reporters ahead of Choi’s questioning.

Choi is the daughter of a late shadowy religious leader and one-time Park mentor called Choi Tae-Min, who was married 6 times, had multiple pseudonyms and set up his own cult-like group known as the Church of Eternal Life.

Choi Tae-Min befriended a traumatized Park after the 1974 assassination of her mother, whom he said had appeared to him in a dream, asking him to help her daughter.

He became a long-time mentor to Park, who subsequently formed a close bond with Choi Soon-Sil that endured after Choi Tae-Min’s death in 1994.

Choi Soon-Sil’s ex-husband served as a top aide to Park until her presidential election victory in 2012.

A public apology by Park, in which she acknowledged seeking limited advice from Choi, did little to assuage public outrage and she has struggled to draw a political line under the crisis.

Park carried out a partial reshuffle of her key aides on Sunday and is considering calls from her ruling Saenuri Party to form a neutral multi-party cabinet to restore public trust and national unity.

In a message sent to reporters, one of her senior advisers who stepped down in the reshuffle described Park as “lonely and sad”.

The main opposition Democratic Party of Korea has stopped short of demanding the president’s resignation, but is refusing to begin cross-party talks until the investigation into Choi has run its course.

Analysts say the scandal could paralyze Park’s administration, underlining her lame-duck status ahead of presidential elections in December next year.

And all this at a time of slowing economic growth, rising unemployment and elevated military tensions with North Korea.

In his Monday press briefing, presidential spokesman Jung stressed that the ongoing political uncertainty would not be allowed to open even the “slightest crack” in the country’s defense posture.

“The government will maintain a firm readiness under any circumstances, and unwaveringly take care of key foreign policy and security issues,” Jung said. – Rappler.com