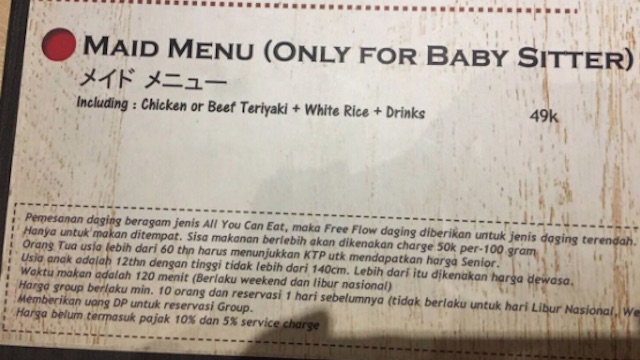 “Can you imagine the feeling of the maid or babysitter who is offered a different menu like this? Don’t be so heartless. (Allegedly menu in Shabu Hachi),” he tweeted.

“I feel bad for babysitters. Their boss and children eat well while they hungrily watch,” she said in a series of tweets.

She added, “And because of that I made the main menu with an affordable price.” 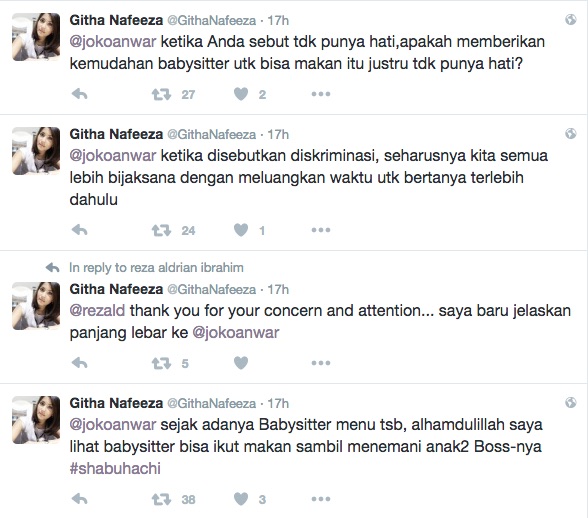 But not everyone was as sympathetic.

Netizen @hayhayhaya, in a series of tweets said, “The menu doesn’t make it convenient, but makes it easier for heartless people to differentiate themselves from their babysitter’s level.”

“We hire babysitters because we need them. Why do we need to differentiate their food? If the babysitter is confused [about the food], we can give them a recommendation.”

He went on, “There should be a common menu in the restaurant like bento boxes.”

“The bottomline is: your kind of menu dehumanize[s] people. They’re not just ‘maids’ but also ‘mates.’ Please be kind.”

@GithaNafeeza @jokoanwar the bottomline is : your kind of menu dehumanize people. they’re not just ‘maids’ but also ‘mates’. please be kind.

Another netizen @t_anna said, “If you can’t afford to pay for your babysitter, don’t bring them to an all-you-can-eat restaurant.”

By Monday afternoon, the owner thanked netizens for their feedback and said they would remove the “maid menu” from their offerings.

Despite the owner’s move however, Anwar told Rappler that the issue went beyond just the menu.

Told of the development, Anwar said: “Alhamdulillah (Praise God),” before adding, “It’s not just about the name of the menu. It’s about the concept of differentiating the maid from the employer. It’s just wrong.”

“Many of us are used to treating the maid and babysitter inhumanely. So that when these cases come to light, many who insist this is reasonable and okay, that’s a defense mechanism – so that we do not realize that we have already become a monster.”

What do you think about the controversy? Let us know in the comments section below. – Rappler.com