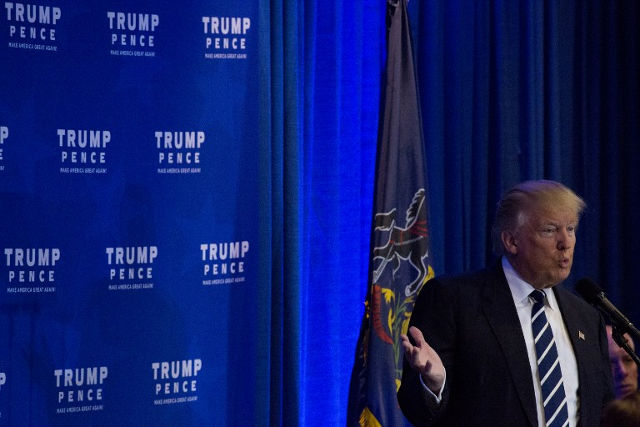 Asian equities sank and the Mexican peso fell after an poll Tuesday showed Trump overtaking market favourite Hillary Clinton in the race for the White House.

“Along with rising bond yields we could have the perfect storm for equities. If we do not see Clinton win this election, get your hard hats ready.”

European stocks followed suit with another raft of losses on Wednesday, as investors became more risk-averse before the November 8 vote.

Wall Street also edged lower at the open, with the Dow down 0.3%.

“Equity markets are suffering from elevated fears that Trump might actually make it all the way to the Oval Office,” added Mike van Dulken, head of research at Accendo Markets.

“While the probability of a Clinton win still remains pretty high, polls are tighter than ever, Trump even leading in some cases, while a Brexit surprise is far too fresh in market memories for the possibility to be discounted entirely.”

World markets have been on a rollercoaster ride since last Friday, when the FBI stunned investors with news that it was investigating additional emails connected to Democrat Clinton.

Trump is mostly viewed by Wall Street as a wildcard, in part because of his harsh criticism of Federal Reserve chief Janet Yellen and international trade pacts.

The Republican was buoyed Tuesday by a national poll that showed him sneaking a narrow lead in national voting intentions, sending New York sliding.

The declines sent leading equity indices to their lowest level since just after Britain’s shock vote to exit the European Union in June.

“In contrast to the sell-off in equities, investors were seeking the safety of government debt, sending bond yields lower.”

“The chatter in the market… was that, although Clinton was still a clear favourite, the probabilities of her winning seemed to be similar to that of the UK staying in the EU just prior to June’s referendum. So once bitten twice shy, for many.”

Some analysts say a Trump win could also lead the Federal Reserve — which ends a policy meeting on Wednesday — to put off an expected December interest rate hike owing to worries about his effect on the economy.

The greenback was meanwhile sharply up at 19.35 Mexican pesos per dollar, from 18.85 late on Tuesday.

The peso is considered a proxy for Trump’s chances owing to his anti-Mexican rhetoric throughout the campaign including his pledge to remove undocumented migrants, build a wall and tear up a trade deal. – Rappler.com