Nov 15, 2016 10:54 PM PHT
Agence France-Presse
Facebook Twitter Copy URL
Copied
The decision is a first victory for the 65-year-old who has been convicted and sentenced in all cases against him since being toppled by then army chief and now President Abdel Fattah al-Sisi 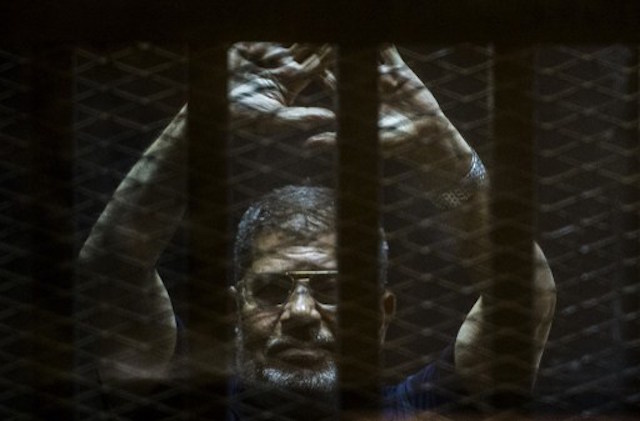 CAIRO, Egypt – An Egyptian appeals court on Tuesday, November 15, overturned a death sentence handed down against ousted Islamist president Mohamed Morsi in one of four trials since his 2013 overthrow.

The decision is a first victory for the 65-year-old who has been convicted and sentenced in all cases against him since being toppled by then army chief and now President Abdel Fattah al-Sisi following mass street protests.

Since 2013 his Muslim Brotherhood movement has since been blacklisted and subjected to a crackdown that has killed hundreds of his supporters and jailed thousands.

Morsi has been wearing the red uniform reserved for prisoners on death row after being condemned to death in June last year over a 2011 prison break.

“He’ll take off the red uniform,” one of his lawyers, Abdel Moneim Abdel Maqsud, said on Tuesday.

The Court of Cassation on Tuesday ordered that Morsi be retried on the charges of taking part in prison breaks and violence against policemen during the 2011 revolt, a judicial official said.

Five co-defendants, including the supreme guide of the Brotherhood, Mohamed Badie, who also received death sentences in the same case, will be retried too.

Nearly 100 others who were tried in absentia are unaffected by the appeals ruling.

“The initial verdict was marked by judicial flaws so we were expecting this decision from the Court of Cassation,” Abdel Maqsud said.

Last month, the same appeals court upheld a 20-year jail sentence handed down against Morsi in April in a separate trial on charges of ordering the use of deadly force against protesters during his year in power.

Morsi has also been sentenced to life in prison in two other trials, both of which his legal team has appealed.

The Court of Cassation is to issue a verdict on Tuesday next week in the appeal against a life sentence on charges of spying for Iran, Lebanese militant group Hezbollah and the Palestinian Islamist movement Hamas.

And the same court will from November 27 review Morsi’s appeal against the same sentence in another case in which he was found guilty of stealing documents relating to national security and handing them over to Qatar, a longstanding supporter of the Brotherhood.

Morsi is being held at the Borg el-Arab prison near the northern city of Alexandria.

Hundreds of his supporters have been sentenced to death in speedy mass trials that have been condemned by the United Nations and human rights groups.

Some sentences have been overturned by the Court of Cassation on appeal.

Islamist militants have waged an insurgency that has killed hundreds of policemen and soldiers since Morsi’s ouster.

A judge in one of Morsi’s trials earlier this month escaped unharmed when a car bomb exploded in Cairo.

And in September, militants detonated a car bomb as the country’s deputy state prosecutor was passing. He was unharmed. – Rappler.com