Nov 16, 2016 9:01 AM PHT
Agence France-Presse
Facebook Twitter Copy URL
Copied
(UPDATED) The ships were due in Auckland this week for celebrations marking the New Zealand navy's 75th anniversary but have instead been diverted to the disaster zone 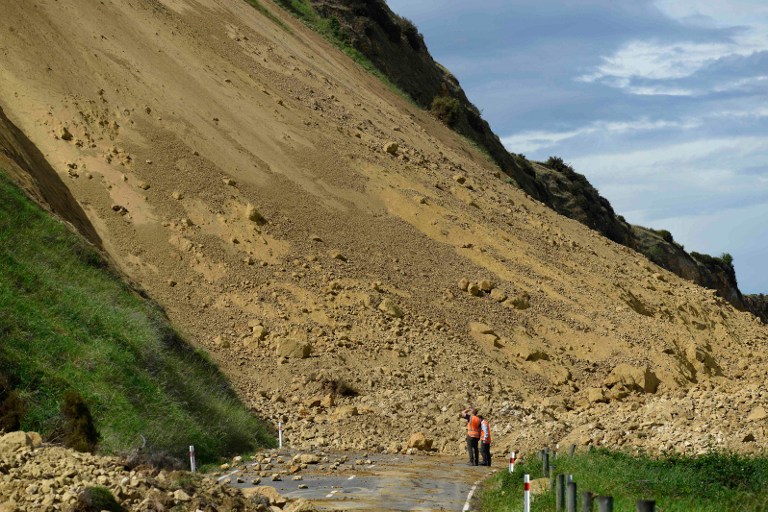 New Zealand’s HMNZS Canterbury was the first to anchor at the South Island seaside town of Kaikoura to evacuate tourists trapped by the powerful 7.8 tremor.

Vessels from the United States, Canada and Australia were also steaming toward the town, which bore the brunt of the seismic jolt that hit just after midnight on Monday.

The ships were due in Auckland this week for celebrations marking the New Zealand navy’s 75th anniversary but instead diverted to the disaster zone.

“It’s heartening to see overseas partners so willing to alter their plans and offer their assistance,” Defence Minister Gerry Brownlee said, adding that the international vessels were Canada’s HMC Vancouver, Australia’s HMAS Darwin and the US destroyer USS Sampson.

A further 3 New Zealand warships are also involved in the operation and Wellington has accepted unspecified aid from the Japanese and Singapore militaries in the wake of the quake that claimed two lives and caused massive infrastructure damage.

The Sampson is the first US warship to visit New Zealand waters in 33 years, ending a ban sparked by a Cold War-era diplomatic spat over Wellington’s ban on nuclear-powered vessels.

US Secretary of State John Kerry said on a visit to New Zealand on Sunday, November 13, that its presence was a historic moment marking “the normalization of our security cooperation”.

The international rescue mission’s top priority is evacuating tourists from Kaikoura, which has been cut off after huge landslides severed road and rail access.

The town has a population of 2,000 bolstered by tourists, mostly international backpackers attracted by the area’s popular whale-watching cruises.

Police say water is running low, power is intermittent and hundreds of people are sheltering in evacuation centers.

New Zealand military helicopters on Tuesday, November 15, airlifted around 200 of the 1,200 trapped tourists to nearby Christchurch, and the warship Canterbury will take up to 500 on Wednesday.

The tremor, one of the most powerful ever in the quake-prone South Pacific nation, has been followed by more than 1,700 aftershocks, complicating relief efforts.

The quake triggered numerous landslides that dumped mountains of rocky debris on a main highway and ripped railway tracks 10 meters (30 feet) off course, while huge fissures opened up in roads and houses were rocked off their foundations.

“The landslides that have occurred as a result of the earthquake remain dangerous. Material can move at any time,” it said in warning people to be cautious.

Prime Minister John Key said rescuers would deliver much-needed supplies to the town before starting a clean-up that was likely to cost billions of dollars.

The quake was felt across most of the country, causing severe shaking in Wellington, about 250 kilometers (155 miles) away.

Streets and footpaths in areas of the capital remained cordoned off Wednesday due to the danger of falling debris from several office buildings that sustained serious damage.

The Defence Department’s city center headquarters has reportedly been rendered uninhabitable, while officials fear one office block could collapse entirely.

“The building is at significant risk of collapse so currently police and fire are conducting operation to seal off the area,” NZ Fire Service regional commander Brendan Nally told commercial radio.

The tremor also ignited painful memories for residents of Christchurch, which was devastated five years ago by a 6.3 tremor that killed 185 people.

New Zealand is on the boundary of the Australian and Pacific tectonic plates, which form part of the so-called “Ring of Fire”, and experiences up to 15,000 tremors a year. – Rappler.com