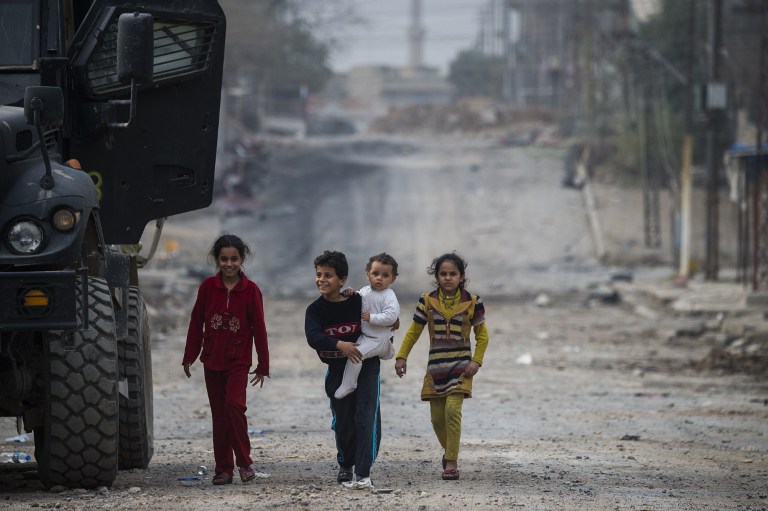 MOSUL, Iraq – Iraqi forces piled pressure on the Islamic State (ISIS) group around Mosul Thursday, November 17, moving closer to cutting off the jihadists’ escape route west to Syria and thrusting deeper into the east of the city.

Pro-government paramilitaries advancing on the town of Tal Afar, which commands the city’s west approaches, entered its airport, while troops moving up from the south had the Mosul airport in their sights.

Wounded civilians continued to stream out of the east of Mosul as government forces battled ISIS fighters on the streets.

The first casualties began arriving at a field clinic on the city’s eastern edge after a mortar attack at around 11:00 am local time (0800 GMT), filling its 9 blood-stained cots within minutes.

Others were forced to sit on plastic chairs or lie on rugs in the dirt awaiting treatment.

Medics zipped a white body bag around one of the dead, as a relative sobbed nearby.

“We were waiting at home in Al-Samah to have lunch when the mortar round hit,” said Hassan, who was wounded along with three of his brothers.

Lying on his side on a cot, Hassan frantically asked passing medics about his infant son Jassem, who was being treated nearby for wounds to his eyes.

Iraqi forces and civilians alike have paid a heavy price in the first month of the battle for Mosul, although casualty figures have not been released by the authorities.

Hashed al-Shaabi paramilitaries allied to the government were battling ISIS fighters and looking for booby traps inside Tal Afar airport, the last major objective before the town itself.

“Daesh has planted bombs in large parts of Tal Afar airport and operations are under way to clear it completely,” the Hashed al-Shaabi said in a statement.

Control of Tal Afar, some 50 kilometres (30 miles) from Mosul, would bring pro-government forces closer to surrounding IS in its last major Iraqi stronghold.

The city would be cut off from ISIS-controlled territory in Syria, where its de facto capital Raqa is also in the sights of US-backed forces.

South of Mosul, advancing troops were nearing the city’s airport.

An officer with elite interior ministry forces said a planned advance on Thursday would bring them to within 4 kilometers (two and a half miles).

Anti-ISIS fighters were also within striking distance of Mosul’s northern neighborhoods while in the east elite counter-terrorism forces and army troops punching in from two directions were expected to join up despite stiff resistance.

That would tighten their grip on the east of the city although much tough fighting could still lie ahead when they cross the Tigris River and take on ISIS in the narrow streets of the old city on its west bank.

ISIS, whose leader Abu Bakr al-Baghdadi proclaimed his “caliphate” in Mosul in June 2014, has so far invested more into this battle than the defense of other Iraqi cities such as Tikrit or Fallujah.

Their strategy remains unclear, however, and Michael Knights of the Washington Institute for Near East Policy said it was hard to know whether the worst was yet to come.

“We could be fighting through a hard crust with a soft inside, or it could be all hard,” he said.

Human Rights Watch issued a statement on Thursday that included accounts by residents of the Hamam al-Alil area south of Mosul suggesting that a mass grave found there contains the bodies of former police killed by ISIS.

The grave was found outside the town of Hamam al-Alil on November 7 after troops overran it in their drive north. One witness told HRW that over two nights last month at least 230 people, some of them former police, were brought to the site and may have been executed there.

“This is another piece of evidence of the horrific mass murder by (ISIS) of former law enforcement officers in and around Mosul,” said HRW deputy Middle East director Joe Stork.

According to the United Nations, nearly 60,000 people have been displaced since the offensive to retake Mosul was launched on October 17.

“We are working as quickly as we can and in close coordination with Iraqi authorities to help some of the most at-risk people in the world,” UN humanitarian coordinator Lise Grande said.

Most of the first weeks of fighting were in sparsely populated areas outside the city but forces are now pushing into heavily built-up areas where aid delivery is complicated.

“With military operations imminent in densely populated sections of Mosul city, humanitarians are increasingly worried about the ability of families impacted by the conflict to reach safety and assistance,” the UN said in a statement. – Rappler.com