Nov 19, 2016 8:16 PM PHT
Agence France-Presse
Facebook Twitter Copy URL
Copied
The demonstrations have provided a stark challenge to Park Geun-Hye's authority, but the president has defied calls to step down 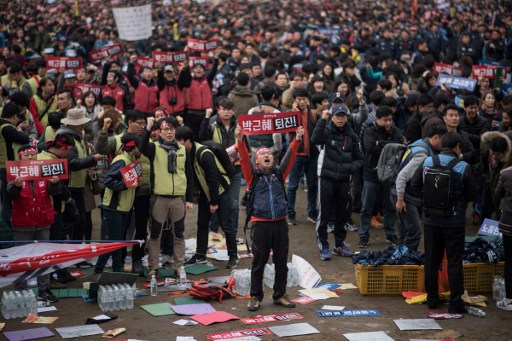 SEOUL, South Korea – Tens of thousands of protestors rallied in Seoul on Saturday, November 19, for the 4th in a weekly series of mass protests urging President Park Geun-Hye to resign over a corruption scandal.

The demonstrations – among the largest seen in South Korea since the pro-democracy protests of the 1980s – have provided a stark challenge to Park’s authority, but the president has defied calls to step down.

Organizers said the candle-lit rally in Seoul drew some 450,000 protestors who chanted “Park Geun-Hye resign” as they gathered in central Seoul.

So far the protests have been largely peaceful, with many families participating, but there was still a heavy police presence, with buses and trucks blocking access roads to the presidential Blue House.

“We want to have a peaceful protest,” Nam Jeong-Su, spokesman for the Korean Confederation of Trade Unions, told Agence France-Presse.

Nam said the ranks of protestors had been swelled by thousands of high-school students who finished their final exams earlier in the week.

And this being South Korea – with the world’s highest smartphone penetration rate – many had downloaded a special app showing a burning candle to hold aloft during the rally.

“We’re here to show my children the site where history is being made”, said Kim Myung-Hee, 30, who came with her husband and two daughters.

“Park simply doesn’t feel ashamed of the wrongs she and her friend did. She must go,” Kim said.

The anti-Park rallies have continued despite two televised apologies from the president over a scandal linked to her friendship with long-time confidante Choi Soon-Sil, who has been arrested for fraud and abuse of power.

Prosecutors have been investigating allegations that Choi, 60, leveraged their relationship to coerce donations from large companies like Samsung to non-profit foundations which she set up and used for personal gain.

She is also accused of interfering in government affairs, despite holding no official position.

Lurid reports of the unhealthy influence Choi wielded over Park have seen the president’s approval ratings plunge to 5% – a record low for a sitting president.

Lee Won-Cheol, a 48-year-old IT expert, was carrying a banner and wearing a medical mask inscribed: “Park resign”.

“She is a criminal. How can we have a criminal as our president? She must step down,” he said.

Fresh from the crucial college entrance exam they spent their entire school lives preparing for, a large number of high-school seniors were at their first rally, having missed the previous 3 due to study commitments.

“Making this country better is more important than entering a good college,” said Park Chai-Un, as he collected donations to buy candles and bottled water for protesters.

“When things go this wrong with the country, it will become even more difficult for us to find jobs. That’s why I am here,” said one of his classmates Kim Mi-Sung.

In an effort to soothe public anger, Park has agreed to relinquish some of her extensive presidential powers and submit to a probe by an independent special prosecutor to be appointed by parliament.

But she has offered no sign of resigning and some members of her ruling Saenuri Party have started to push back at the popular protests of the past month.

“Candles are candles. They will just go out with a gust of wind,” one Saenuri lawmaker said.

The scandal has paralyzed the Park administration and caused the president to pull out of a gathering of Asia-Pacific Economic Cooperation (APEC) leaders in Peru next week.

But after a lengthy hiatus, Park has visibly returned to normal duties and announced she will attend an annual summit with China and Japan in Tokyo next month.

The presidential Blue House said Park was receiving baskets of flowers from supporters, and some 5,000 people joined a small pro-Park rally held before the main protest. – Rappler.com