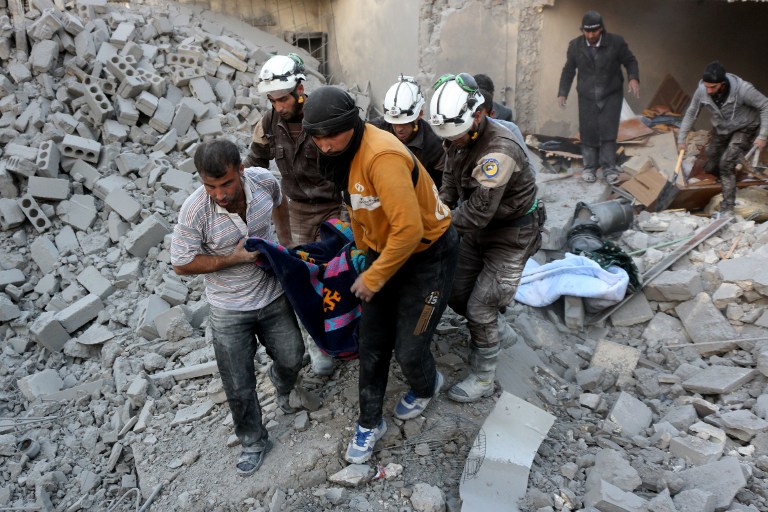 ALEPPO, Syria – Syrian government forces advanced quickly inside rebel-held east Aleppo on Monday, November 21, as the UN raised the alarm for nearly one million people living under siege in the war-wracked country.

UN aid chief Stephen O’Brien told the Security Council that 974,080 people were now living under siege in Syria, more than double the number from 6 months ago.

The assessment follows mounting international concern over the fate of Aleppo, where 250,000 people are trapped in the east of the city under a government siege.

Syrian President Bashar al-Assad’s regime lost control of the eastern part of Syria’s second city to insurgents in 2012, and its recapture would be its biggest victory in the country’s brutal 5-year conflict.

The Syrian Observatory for Human Rights said control of the northeastern Aleppo district could give regime forces an edge and isolate rebels from other areas held by insurgents.

The monitoring group’s chief Rami Abdel Rahman said it was the biggest advance regime forces have made so far inside eastern Aleppo.

“If they take control of Masaken Hanano, the regime will have line of fire control over several rebel-held neighborhoods and will be able to cut off the northern parts of rebel-held Aleppo from the rest of the opposition-held districts,” he said.

Milad Shahabi, a member of Masake Hanano’s council, told Agence France-Presse that “civilians started to flee the neighborhood” where fighting was still underway and they were heading to southern areas.

Al-Watan newspaper, close to Syria’s government, described the neighborhood as the “most important stronghold of the gunmen” in Aleppo.

Once Syria’s economic powerhouse, Aleppo has been ravaged by the conflict that began with anti-government protests in March 2011.

A European diplomat said the government’s capture of east Aleppo appeared to be a matter of time.

“Now, it’s just a question of how long they (rebel forces) can hold on,” the diplomat said, speaking on condition of anonymity.

“There is nothing to eat, no more hospitals and the bombardment is non-stop. They are under very strong pressure.”

Government forces have pounded east Aleppo with air strikes, barrel bombs and artillery fire since last Tuesday, November 15, in the latest phase of an operation the army announced in late September.

The Observatory says more than 100 civilians have since been killed in east Aleppo, including at 15 who died Monday in regime air strikes, barrel bomb attacks and artillery fire.

But the new assault could spark a fresh humanitarian catastrophe, the UN’s Syria envoy has warned, and prompt a mass exodus of those trapped under regime siege.

No aid has entered the east since government forces surrounded it in July, prompting food and fuel shortages in opposition-held neighborhoods.

In New York, UN aid chief O’Brien drew a bleak picture of life under siege for nearly one million Syrians, in his briefing to the Security Council.

“Nearly one million Syrians are living tonight under siege,” he said, including in the rural Eastern Ghouta region near Damascus.

“Civilians are being isolated, starved, bombed, denied medical attention and humanitarian assistance in order to force them to submit or flee.”

O’Brien condemned this “deliberate tactic of cruelty” and said the sieges were mostly perpetrated by government forces against civilians.

“The situation is horrific, catastrophic,” said French ambassador Francois Delattre who accused the government of waging a “total-war strategy to take back Aleppo, no matter the price”.

On Sunday, US President Barack Obama said he was “not optimistic about the short-term prospects in Syria”.

UN envoy Staffan de Mistura on Monday wrapped up a visit to Damascus after the government rebuffed his plan for a truce in Aleppo that included opposition administration of eastern areas.

“We told him that we reject that completely,” said Foreign Minister Walid Muallem.

De Mistura warned time was “running out” for east Aleppo, adding that there was concern about “an acceleration of military activities” in the city and other parts of Syria.

Meanwhile the US on Monday named a dozen Syrian generals and officers accused of leading attacks on civilian targets, with its UN ambassador Samantha Power warning they would face justice one day.

“The United States will not let those who have commanded units involved in these actions hide anonymously behind the facade of the Assad regime,” Power told the Security Council. – Rappler.com