Trump backs Farage as British ambassador to U.S. – but there’s no vacancy 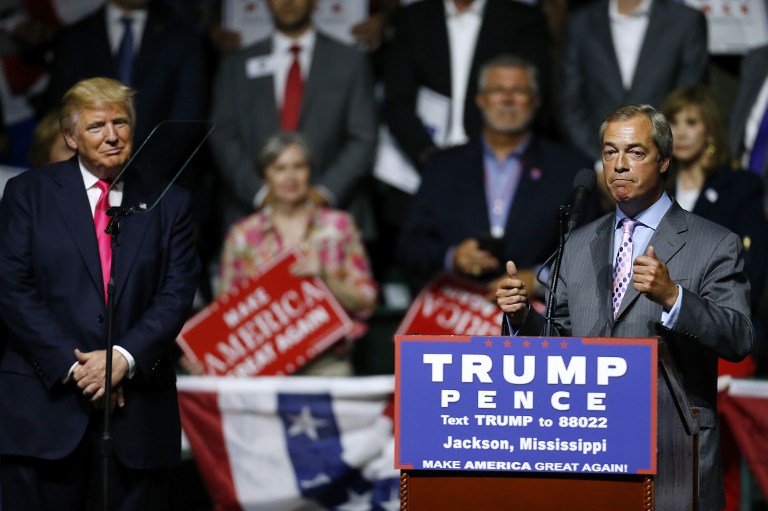 WASHINGTON DC, USA (UPDATED) – Donald Trump has tweeted that Brexit campaigner Nigel Farage “would do a great job” as British ambassador to the US, in the latest unorthodox intervention by the president-elect.

The decision on who is appointed to represent the United Kingdom in Washington is a matter for the British government, but that did not stop the controversial property mogul turned world leader from weighing in on social media.

“Many people would like to see @Nigel_Farage represent Great Britain as their Ambassador to the United States,” Trump said on his Twitter account. “He would do a great job!”

Farage, interim leader of the nationalist UK Independence Party which campaigned for Britain to leave the European Union, met recently with the president-elect at Trump Tower in New York.

The British politician said he was  flattered by Trump’s tweet.

“I’m very flattered by the comments,” Farage told Britain’s Press Association. “I have said since I met the president-elect that I would like to do anything I can to act in a positive way to help relationships between our two countries.”

But according to a Downing Street spokesman, “there is no vacancy. We already have an excellent ambassador.”

During the divisive US presidential campaign, Trump repeatedly compared his presidential bid to the Brexit referendum in which a majority of Britons voted to split from the EU.

Trump’s call on Twitter is unusual – ambassadors are appointed by the governments they represent, not by the administration of the country in which they serve.

Britain is keen to build bridges with Trump after many of its leading government figures criticized the president-elect during his successful election campaign.

London is also interested in sounding out a US trade deal as it plots its departure from the European Union.

Queen Elizabeth II could host Trump within months of him becoming president, with the British government confirming Monday, November 21, that it was considering a state visit next year.

Royal officials said the government was responsible for organizing state visits, and a spokeswoman for Prime Minister Theresa May said the proposal was “under consideration”.

Trump told May that he was a “big fan of the Queen” when the pair spoke by telephone following his victory, and is also reported to have told Farage that his late mother Mary would be “chuffed to bits when I meet the Queen.”

Britain will not issue an invitation to a president-elect, but is expected to make its move shortly after Trump’s inauguration on January 20. – Rappler.com