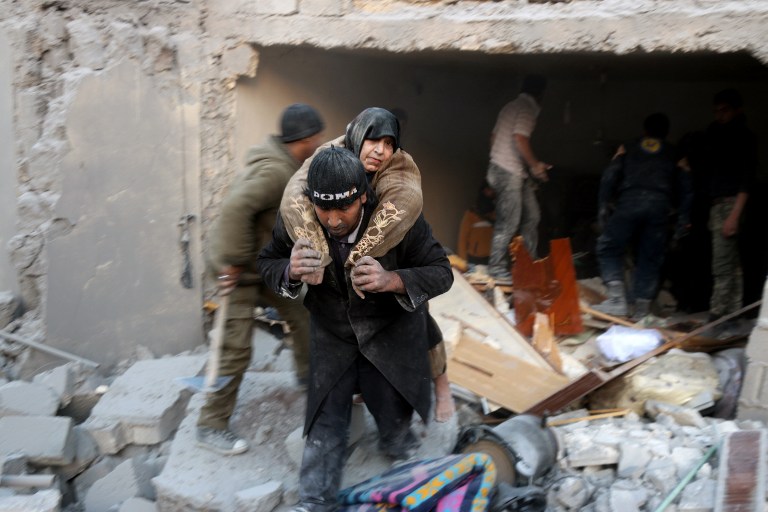 ALEPPO, Syria – Syrian pro-government forces pushed deeper into rebel-held eastern Aleppo on Tuesday, November 22, forcing civilians to flee to southern neighborhoods to escape the onslaught as the regime pressed an assault to recapture the entire city.

Recapturing east Aleppo would be the government’s biggest victory yet in Syria’s 5-year conflict and deal a potentially decisive blow to the opposition.

The city was once the country’s economic powerhouse, but it has been ravaged by the war that has killed 300,000 people since it began with anti-government protests in March 2011.

Military aircraft dropped leaflets over east Aleppo, urging rebels to distribute food to civilians, leave the area and allow residents to do so too.

Government forces pounded the area with air strikes and barrel bombs as ground troops advanced in the key eastern district of Masaken Hanano, the Syrian Observatory for Human Rights said.

A week into the latest round of fighting for the city, the regime controls around a third of the district, the Observatory said.

The area has been shelled heavily during the war, and many residents had already fled, but the latest fighting prompted even the last holdouts to leave.

Milad Shahabi, a member of the local council, told Agence France-Presse that residents were fleeing to southern parts of the opposition-controlled east.

Masaken Hanano was the first Aleppo district to fall to rebels in 2012, and it is strategically vital.

Observatory head Rami Abdel Rahman said that if regime forces manage to take the district they will be able to “cut off the northern parts of rebel-held Aleppo from the rest of the opposition-held districts”.

At least 143 civilians, including 19 children, have been killed in the city’s east since the latest assault began on November 15, according to the Britain-based monitor.

Another 16 civilians, including 10 children, have been killed in rebel fire on government-controlled western Aleppo, it said.

It added that residents of eastern districts had suffered from “suffocation” after 4 barrel bomb attacks and that medical officials suspected a chlorine gas attack.

The Organization for the Prohibition for Chemical Weapons (OPCW) said that the regime’s key backer Russia had offered it “samples” relating to an alleged chemical attack in Aleppo.

The global watchdog tasked with destroying chemical weapons is probing more than 20 reports of the alleged use of toxic arms in Syria since August.

Iran’s veterans’ affairs office said that more than 1,000 combatants sent from Iran to fight in support of President Bashar al-Assad had been killed in the conflict.

Tehran has sent military advisers, as well as fighters recruited from Afghanistan and Pakistan, to work with Assad’s forces.

The renewed fighting comes amid international concern for the fate of more than 250,000 civilians trapped in besieged rebel-held areas of Aleppo.

Despite searing international criticism, there is little sign that the government advance will be halted.

For the past 4 years, Aleppo has been divided between the government-controlled west and rebel-held east, which has been sealed off from the outside world since the army surrounded it in mid-July.

No food aid has entered since then, and locals suffer severe shortages of food, fuel, electricity and water.

Rebels have tried several times to break the siege, without success.

The UN’s aid chief Stephen O’Brien on Monday, November 21, slammed the use of sieges in Aleppo and elsewhere. In remarks to the Security Council, he said nearly one million Syrians were living under blockade.

Emile Hokayem, a senior fellow at the International Institute for Strategic Studies, said there was very little the world could now do to prevent the whole city falling to pro-regime forces.

“You can’t send weaponry in any more, all the supply roads are cut, and you won’t intervene from the air because of the costs and the risks,” he told Agence France-Presse.

“There was a time to do something about Aleppo… but now it’s too late.”

Russia, meanwhile, accused the UN’s Syria envoy of torpedoing a Security Council resolution to revive peace talks between the regime and opposition.

“The United Nations in the form of its special representative Staffan de Mistura has been sabotaging the resolution for more than 6 months,” Russian Foreign Minister Sergei Lavrov said.

The resolution calls for “holding inclusive Syrian talks without preconditions”, he said.

And in Washington, the Pentagon said a US drone strike had killed a senior Al-Qaeda leader in northwestern Syria.

“He had ties to terrorist groups operating throughout Southwest Asia, including groups responsible for attacking US and coalition forces in Afghanistan and those plotting to attack the West,” Cook said. – Rappler.com