Critics round on Myanmar’s Suu Kyi over Rohingya crisis 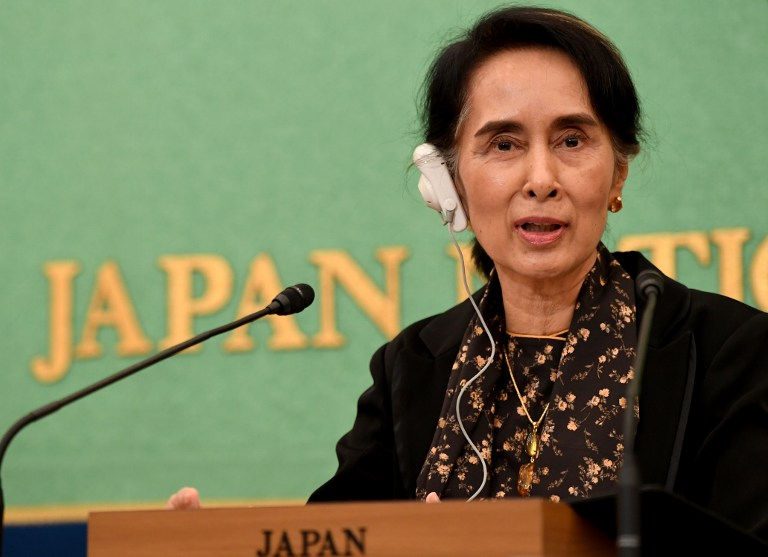 The democracy icon, garlanded by the international community as a moral force during Myanmar’s junta years, has remained near-silent despite mounting evidence of army abuses in Rakhine State.

The United Nations has said recent security operations amount to “ethnic cleansing” of the Muslim Rohingya minority, with thousands fleeing to neighboring Bangladesh.

Suu Kyi, Myanmar’s de facto leader, has seen her halo start to slip since her party took power this year after winning the country’s first free elections in a generation.

Her failure to speak out in support of the Rohingya “is baffling to an international audience that persists in casting her as a human rights icon,” said David Mathieson of Human Rights Watch.

“One version to explain her silence is callous indifference, another is calculated limited messaging… but the most likely is she simply has no control over the Burmese army.”

Thousands of Rohingya have fled the army lockdown in Rakhine to Bangladesh, bringing with them horrifying stories of gang rape, torture and murder at the hands of Myanmar’s military.

Rights groups say the military has used attacks on police border posts last month as an excuse for a crackdown on the Rohingya, a Muslim group reviled by many Myanmar Buddhists.

The government flatly denies the allegations, saying troops are defending the country from an armed insurgency.

It has barred investigators and foreign journalists from the locked-down area and lashed out at reports of abuse as “fabrications”.

Suu Kyi, who has travelled to India and Japan during the 6-week crisis, has commented only to say a probe into the attacks was underway in accordance with the law.

But she has faced growing criticism for her inaction.

The UN special rapporteur on Myanmar, Yanghee Lee, has slammed the lockdown as “unacceptable”.

Researchers at Queen Mary University London said her silence amounts to “legitimizing genocide” and entrenching “the persecution of the Rohingya minority”.

“Despite the fact that this is the most significant test of Suu Kyi’s leadership, the country’s de facto leader has remained remarkably indifferent,” they said this week.

Even though she led her party to power Suu Kyi is hampered by a junta-era constitution that gives the army a quarter of parliamentary seats and control over security.

She is also cramped by the prevailing view among many Myanmar Buddhists that the Rohingya are illegal immigrants, meaning any moves to support them would risk a public backlash.

“The international community must put serious pressure on Aung San Suu Kyi or the problem will not be solved,” said one man, describing how troops stormed into a neighbouring village on Friday shooting indiscriminately. – Rappler.com