Colombia crash pilot reported he was out of fuel – tape 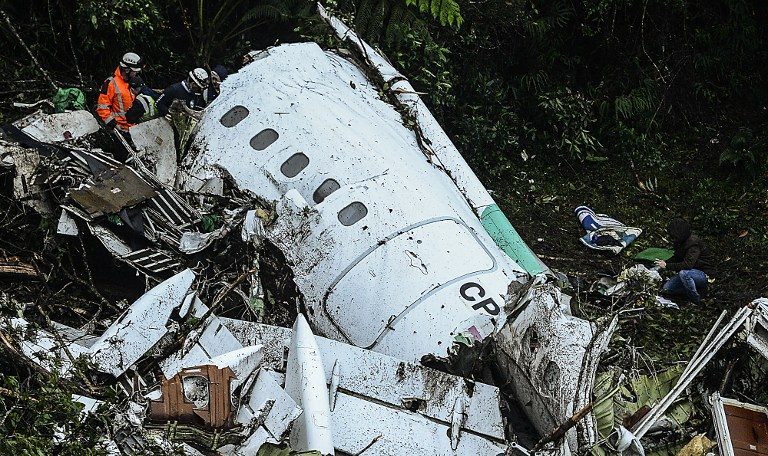 Facebook Twitter Copy URL
Copied
(3rd UPDATE) Details of the doomed aircraft's last harrowing minutes emerge on Wednesday, November 30, as fans mourn the loss of all but 6 people on the flight, including most of the Cinderella-story Chapecoense Real football team

MEDELLIN, Colombia (3rd UPDATE) – The pilot of a charter plane carrying a Brazilian football team radioed frantically that he was out of fuel minutes before slamming into a hillside near Medellin with 77 people on board, an audio recording showed.

Details of the doomed aircraft’s last harrowing minutes emerged on Wednesday, November 30, as fans mourned the loss of all but 6 people on the flight, including most of the Cinderella-story Chapecoense Real football team.

An audio tape aired by the Colombian media showed that the pilot of the LAMIA airlines BAe146 radioed the control tower Monday night seeking priority to land because of a fuel problem.

The operator acknowledges the request but tells pilot Miguel Quiroga he will have to wait seven minutes to land.

“I have a plane below you making its approach … How much time can you remain in your approach, Lima-Mike-India?”

“We have a fuel emergency, ma’am, that’s why I am asking you for it at once, full stop.”

The timeline was not immediately clear but shortly thereafter the pilot radioed: “Ma’am, Lima-Mike-India 2933 is in total failure, total electrical failure, without fuel.”

The pilot is heard asking: “Vectors, ma’am, vectors to the runway.” Vectors is the term for the navigation service provided to planes by air traffic control.

The operator is heard giving him directions, and asking his altitude.

Those were Quiroga’s last words to the control tower.

Colombia’s Civil Aeronautics agency said the time sequence of the tape was “inexact,” and had no comment on the content of the tape.

But the agency’s air safety chief, Freddy Bonilla, confirmed at a news conference that the plane was out of fuel at the moment of impact.

Bonilla said international rules require aircraft to maintain fuel in reserve when flying between airports, and the LAMIA plane had failed to do so.

The aircraft’s “black box” has been recovered intact and in “perfect condition,” said Civil Aviation director Alfredo Bocanegra, who added however that it would take investigators at least six months to reach a conclusion about the cause of the crash.

The crash killed most of Chapecoense’s squad and 20 journalists traveling with them to the finals of South America’s second-largest club tournament.  (READ: Chapecoense Real: Plane crash kills dream of football team that defied odds)

The unsung Brazilian club was on the way to crowning a fairytale year in the Copa Sudamericana against Medellin side Atletico Nacional.

The plane was scheduled to make a refueling stop in Bogota, but skipped the Colombian capital and headed straight for Medellin, reported Bolivian newspaper Pagina Siete, citing a representative of the airline.

“The pilot was the one who made the decision,” Gustavo Vargas of Bolivian charter company LAMIA told the newspaper.

“He thought the fuel would last.”

Bolivian civil aviation chief Cesar Varela told reporters “the crew had their licenses in order. Everything was in order.”

British and Brazilian investigators headed to Colombia to help with the probe, authorities said.

Hometown fans in the southern city of Chapeco, population 200,000, were in shock.

“Chapeco is not a big city. We would meet (the players) in the street,” said teacher Aline Fonseca, 21.

“It’s hard to keep going,” she said. “The city is devastated.”

Fans gathered Wednesday evening in the Chapecoense stadium, which was draped in black ribbons, and in Atletico Nacional’s stadium in Medellin at the time the match was to have been played.

Both stadiums were packed to capacity.

Mourners, many dressed in white, held candles in the air in Chapeco as the handful of remaining players from the team took the pitch in tears.

Other Brazilian clubs have offered Chapecoense players so it can continue competing. Special funds have also been set up.

The Spanish football league said next Saturday’s blockbuster clash between Barcelona and Real Madrid will be preceded by a minute’s silence for the crash victims.

Six people miraculously survived the crash. Three were footballers, but goalkeeper Jakson Follmann had his right leg amputated, said the hospital treating him.

They included Chapeco mayor Luciano Buligon, who arrived Wednesday in Medellin to oversee the return of the bodies along with Brazilian Foreign Minister Jose Serra.

Brazil’s ambassador in Colombia, Julio Glinternick, told AFP authorities hoped to have identified all the bodies by Thursday morning.

So far, 59 have been identified, according to Brazil’s foreign ministry. of those 52 were Brazilian nationals, five were Bolivian, one was Venezuelan and another was from Paraguay.

The Brazilian air force will then fly them home in two Hercules cargo planes. – Rappler.com