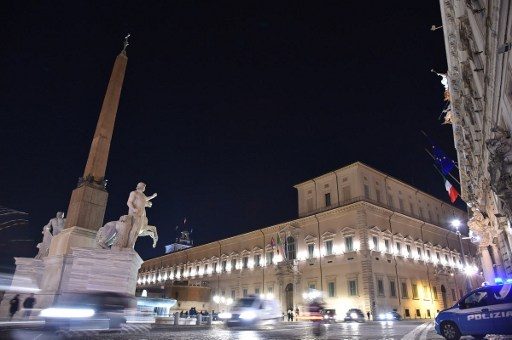 Facebook Twitter Copy URL
Copied
Representatives of Italy's main parties are headed to the presidential palace, their task to agree on a new government made even more urgent by fears of a banking crisis in the eurozone's third-largest economy

Representatives of Italy’s main parties – including the populist Five Star movement – are headed to the presidential palace, their task to agree on a new government made even more urgent by fears of a banking crisis in the eurozone’s third-largest economy.

Italy was plunged into political uncertainty by the resignation of Prime Minister Matteo Renzi following a crushing referendum defeat.

Mattarella must pick a new prime minister with the necessary support in parliament to act as a caretaker until the next general election, which is scheduled for February 2018 but could take place up to a year early.

Saturday will be his 3rd day of consultations. He is expected to announce his decision on Monday, December 12.

From Italy’s finance minister to a doctor and a mafia-hunter, figures from both the political and institutional fields are in the running, though political analysts say the aim is to choose someone from the outgoing PM’s center-left Democratic Party (PD).

Silvio Berlusconi’s center-right Forza Italia (FI) party will follow at 4pm (1500 GMT). Three-time former premier Berlusconi had largely disappeared from the political scene – though not the scandal pages – in recent years, only to cry victory at Renzi’s downfall.

The anti-establishment Five Star party, founded by comic Beppe Grillo, is set for an hour later, followed by the PD at close of day.

All of the party leaders are expected to send representatives rather than attend in person – apart from 80-year old Berlusconi.

Among those in the running for the top job are Finance Minister Pier Carlo Padoan – a seasoned economist with the potential to reassure financial markets and a jittery Europe – and Foreign Minister Paolo Gentiloni.

Having someone with financial know-how at the helm appeared more pressing than ever after Italy’s Monte dei Paschi di Siena (BMPS) bank suffered a set-back on Friday, December 9, in its quest to raise the cash it needs to avoid being wound down.

The world’s oldest bank was reportedly refused an extension by the European Central Bank, sparking fears of a banking crisis.

While the market reaction to Renzi’s resignation was muted, Moody’s ratings agency downgraded its outlook for the country’s sovereign debt on Thursday, December 8, from stable to negative.

Others in the running are Graziano Delrio – one of Renzi’s closest allies – and Dario Franceschini, the culture minister.

Renzi has also been tipped as a possible contender for his own job, with some commentators saying he could be asked to stay on to stave off the chance that the anti-euro Five Star could get into power – though the outgoing PM says he is not interested.

As well as the bank crisis, top of the list for the new government will be resolving a problem with the electoral law, which was caused by Renzi’s referendum defeat.

Italy’s anti-immigration Northern League, which met with Mattarella late on Friday, demanded an immediate revision of the law and snap elections, as did the small, right-wing Brothers of Italy, lead by Giorgia Meloni.

“We are not ready to support any government, the electoral law must be revised immediately,” Meloni said, slamming as “intolerable” the idea of “a government with no end date” which could spend months on the law but neglect Italy’s other problems. – Rappler.com