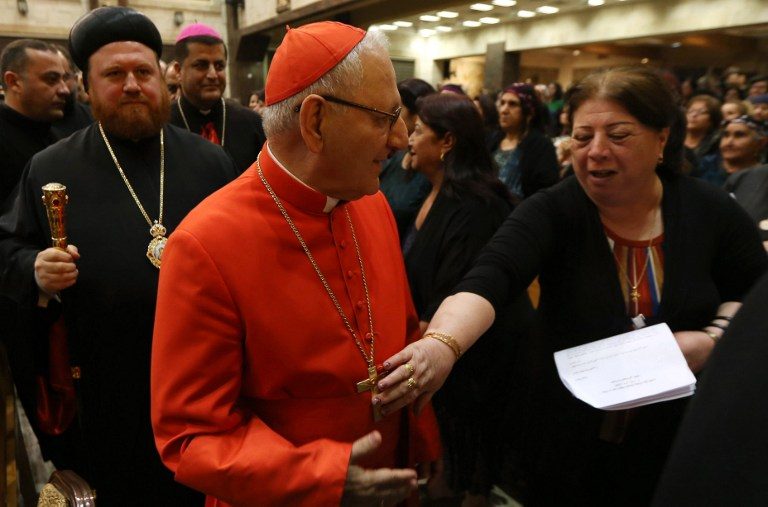 BAGHDAD, Iraq – The patriarch of Iraq’s Chaldean Catholic Church has appealed for international protection to help Iraqi Christians displaced by war return to their homes.

Iraqi forces launched a massive offensive on October 17 to oust the jihadists from their last Iraqi stronghold.

“There was great joy among Christians at the start of the liberation of Nineveh,” Patriarch Louis Raphael Sako told Agence France-Presse on Saturday, December 24.

“But as the battle continues, they are waiting with fear as well as hope,” he said.

Iraqi fighters backed by an international coalition have retaken parts of Mosul but are facing fierce resistance from jihadists defending their last Iraqi stronghold.

While the group has been ousted from several Christian-majority towns, others such as Tal Kayf, 15 kilometers (9 miles) north of Mosul, are still in jihadist hands.

“In the liberated villages, the damage is immense. I have visited these villages, they are 30 to 40% destroyed,” Sako said. “The churches have been damaged, the streets and the infrastructure too.”

But he warned that ISIS must be ousted from Mosul itself before Christians can safely return.

“If Mosul is not liberated, Daesh will be able to infiltrate villages and sow panic,” he said, using an Arabic acronym for the group.

He urged Christians not to join militias such as the Babylon Brigade, a Christian unit within the Hashed al-Shaabi (Popular Mobilization) a loose grouping of mainly Shiite paramilitary groups including several backed by Iran.

“If Christians want to protect their towns, they should join the army or the (Kurdish) peshmerga,” Sako said. “The militias, it’s anarchy.”

Iraq had well over a million Christians before the fall of Saddam Hussein in 2003, but the population has dwindled to just 350,000 as sectarian violence wracked the country.

The majority of those who remain are Chaldeans, an eastern Christian community affiliated with the Roman Catholic Church with roots in northern Iraq.

The jihadist occupation of Nineveh and much of western Iraq in 2014 accelerated the exodus.

ISIS presented Christians with a grim choice: conversion, a heavy tax, exile or death. Around 120,000 fled. Sako said they needed protection if they were to return to areas formerly occupied by the jihadists.

“We have demanded guarantees from the international community,” he said. “There should be some kind of UN or European Union office to monitor things, rather than throwing people unprotected into their villages where they risk being threatened by their neighbors.”

He suggested that European countries each take charge of reconstructing a village or town.

“That would encourage inhabitants who have sought refuge in Europe to go home,” he said.

He called for a national dialogue to reconcile Iraq’s mosaic of sects and ethnicities, saying Prime Minister Haider al-Abadi’s Shiite-dominated government and Muslim religious authorities had changed their discourse.

“(Muslim) religious authorities have said that it is good to celebrate Christmas with the Christians,” he said.  – Rappler.com