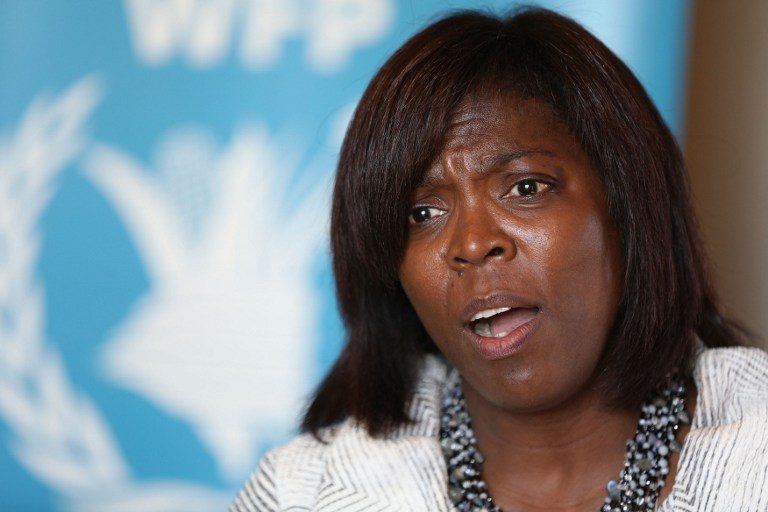 MAIDUGURI, Nigeria – The head of the World Food Program (WFP) said she was hopeful of continued US funding for the organization, despite reports that Washington was mulling heavy cuts in financial support.

Foreign Policy magazine reported on Thursday, January 26, it had seen an executive order from President Donald Trump’s administration that proposed cuts of 40% in voluntary US funding for UN agencies, including the WFP and Unicef.

The proposal emerged as WFP executive director Ertharin Cousin was in Nigeria on a week-long trip to see programmes set up to stave off starvation caused by Boko Haram’s Islamist insurgency.

Unicef also has a presence in the remote region, where the conflict has left at least 20,000 people dead and made more than 2.6 million others homeless since 2009.

Asked about continued US support for the WFP’s activities in Nigeria and around the world, Cousin told AFP late on Thursday: “The US has been the largest donor to WFP for over 50 years.

“Our hope is that this organisation, which serves humanity around the globe and ensures that children don’t go hungry, that has benefited from support on the Republican as well as the Democratic side of the house, can continue to depend upon receiving the financial assistance that’s necessary.”

A cut in US funding would mean a cut in “lifesaving support”, she added.

Northeast Nigeria has seen an influx of international non-governmental organizations in recent months because of high incidences of severe acute malnutrition, particularly among children under five, and reports of famine in some hard-to-reach areas.

Security has improved across the ravaged states of Borno, Yobe and Adamawa, allowing aid agencies to reach hundreds of thousands of people who have lost their homes and livelihoods, including farmland.

The WFP said it helped just over one million people in December with high nutrition supplements and “in kind” monthly cash transfers to buy food. It aims to reach 1.8 million in the first quarter of this year. – Rappler.com