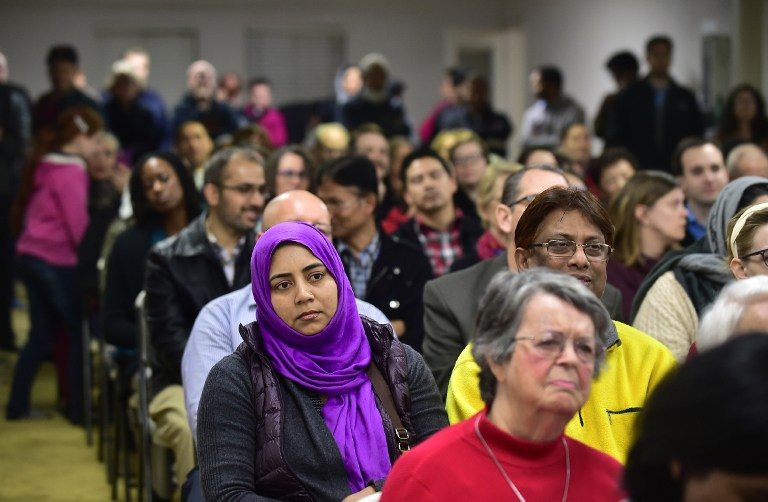 WASHINGTON, DC, USA (3rd UPDATE) – One week into his presidency, Donald Trump was to speak by phone on Saturday, January 28, with various world leaders, amid growing international alarm and a legal challenge over his moves to drastically limit Muslim immigration to the United States.

In a flurry of telephone calls that started early in the morning and was to last throughout the day, Trump was to speak from the White House with five foreign leaders: Japanese Prime Minister Shinzo Abe, Germany’s Chancellor Angela Merkel, Russia’s President Vladimir Putin, France’s President Francois Hollande and Australian Prime Minister Malcolm Turnbull.

The conversations give the US president an early opportunity to explain new policies that have baffled and unnerved much of the rest of the world – particularly his order to temporarily halt all refugee arrivals and impose tough controls on travelers from seven Muslim countries including war-wracked Syria.

It also allows him to begin to develop ties with countries that have been close allies with the US in recent history, as well as Russia – a perennial foe, but a country with which Trump has said he is keen to improve relations.

Trump’s pronouncement on Muslim immigration to the US makes good on one of his most controversial campaign promises to subject travelers from Islamic countries to “extreme vetting,” which he declared would make America safe from “radical Islamic terrorists.”

“This is big stuff,” the new US president declared at the Pentagon on Friday, after signing an executive order entitled “Protection of the nation from foreign terrorist entry into the United States.”

The decree suspends the entire US refugee resettlement program for at least 120 days while tough vetting rules are established.

The new protocols “ensure that those approved for refugee admission do not pose a threat to the security and welfare of the United States.”

In addition, they specifically bar Syrian refugees from the United States indefinitely, or until the president himself decides that they no longer pose a threat.

Meanwhile, no visas will be issued for 90 days to migrants or visitors from seven mainly-Muslim countries: Iran, Iraq, Libya, Somalia, Sudan, Syria and Yemen.

The New York Times reported that airport officials as early as Friday night began detaining travelers, some of whom already had been aboard their flights when Trump announced his executive order.

The order also laid the groundwork for what Trump has pledged will be the “extreme vetting” of visa applicants’ backgrounds – with some exceptions made for members of “religious minorities,” a caveat many see as a way to apply favorable treatment to Christians from majority-Muslim states.

US rights groups filed a legal challenge Saturday to Trump’s order. The suit was filed by the American Civil Liberties Union and other advocacy groups after two Iraqi men were detained Friday night at John F. Kennedy Airport in New York. It seeks their release on grounds they are being held unlawfully.

Ahmed Rehab, director of the Chicago chapter of the Council on American-Islamic Relations, told AFP his group would mount legal challenges to fight the order “tooth and nail.”

“It is targeting people based on their faith and national origin, and not on their character or their criminality,” he told AFP.

Many foreign leaders, meanwhile, were aghast over the new US policy.

Speaking in Tehran Saturday, Iranian President Hassan Rouhani did not comment directly on the visa ban but said Iran had “opened its doors” to foreign tourists since the signing of a nuclear agreement with world powers in 2015.

Now is “not the time to build walls between nations,” he said, in a reference to Trump’s plans to build a wall along the US-Mexico border.

But the US leader did get backing from Czech President Milos Zeman, who praised him for being “concerned with the safety of his citizens.” – Rappler.com