Feb 1, 2017 9:03 AM PHT
Agence France-Presse
Facebook Twitter Copy URL
Copied
(UPDATED) Trump's pick fills the long-vacant ninth position on the bench – empty since Antonin Scalia died in February 2016 – and tilts the balance of the court back in the conservatives' favor 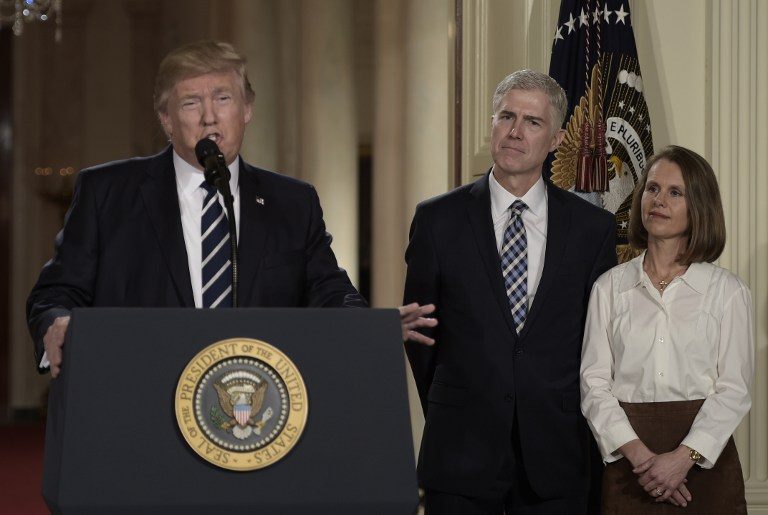 If confirmed by the Senate, he will fill the seat made vacant by the death of Antonin Scalia nearly a year ago and tilt the balance of the court 5-to-4 in conservatives’ favor.

The elegant, silver-haired jurist with a flair for writing incisive rulings is the youngest nominee in a generation.

His appointment could have a major impact on cases ranging from business regulation to gender rights to gun control.

After unprecedented hyping of the announcement, Trump invited Gorsuch and his wife to emerge dramatically before an audience in the East Room of the White House.

“He could have had any job at any law firm for any amount of money, but what he wanted to do with his career was to be a judge, to write decisions, and to make an impact by upholding our laws and our Constitution,” Trump said.

Despite the razzmatazz, Gorsuch was a remarkably orthodox pick for a president who has scythed through norms and precedent during his brief time in office.

Like Scalia, Gorsuch is considered an “originalist” – guided in his legal thinking by the constitution’s original intent and meaning.

Gorsuch says he was on the ski slopes when he learned of his mentor’s death last February: “I couldn’t see the rest of the way down the mountain for the tears,” he remarked in a speech soon after.

For Trump, the selection is payback to evangelical Christian and conservative Republicans who backed his bid for the presidency – at times reluctantly.

“Millions of voters said this was the single most important issue to them when they voted for me for president,” Trump said.

“I am a man of my word. I will do as I say – something that the American people have been asking for from Washington for a very, very long time.”

The Supreme Court is the final arbiter of many of the most sensitive issues of US life and law.

Its members are named to life terms so their influence is long-lasting.

Given the advanced age of several sitting justices, Trump could potentially make several appointments during his term, shaping the court’s direction for a generation.

Once confirmed, however, justices enjoy independence and some have proved politically unpredictable.

With an eye to a bitter Congressional fight, Gorsuch presented himself as someone who is fair-minded and self-deprecating.

“A judge who likes every outcome he reaches is very likely a bad judge, stretching for results he prefers rather than those the law demands,” he joked.

Much Democratic opposition to Gorsuch is likely due to the refusal by Congressional Republicans, following Scalia’s death, to give then president Barack Obama’s court pick a confirmation hearing.

Democrats, who are in a minority in both chambers of Congress, are still smarting from Republican treatment of Obama’s pick, Merrick Garland.

Garland has since returned to his old job as chief judge of the US Court of Appeals for the District of Columbia Circuit in Washington, but Democrats could yet pick a fight.

Although Republicans hold 52 seats in the Senate, they need 60 to confirm a nominee.

That means Gorsuch must be able to win some Democratic votes – a task made tougher by the row over Trump’s ban on travelers from several Muslim countries.

“A little more than a week into the Trump presidency, the new administration has violated our core values, challenged the separation of powers, and tested the very fabric of our Constitution in unprecedented fashion,” said Senate minority leader Chuck Schumer.

Schumer said it was up to Gorsuch to “prove himself to be within the legal mainstream” and “vigorously defend the Constitution” from presidential abuses.

He added: “Given his record, I have very serious doubts about Judge Gorsuch’s ability to meet this standard.”

House Democratic minority leader Nancy Pelosi called Gorsuch “hostile to women’s rights” and said the consequences of confirming him “could not be more serious or far-reaching.”

Democrat Elizabeth Warren said that Trump “had the chance to select a consensus nominee,” but instead chose someone who “has sided with employers who deny wages, improperly fire workers, or retaliate against whistleblowers for misconduct.”

“He has an impressive background and a long record of faithfully applying the law and the Constitution,” said Senate majority leader Mitch McConnell.

“When the Senate previously confirmed him to the appellate court, the bipartisan support in the Senate was so overwhelming, a roll call vote was not even required,” McConnell added.

Senator Ted Cruz described Gorsuch as “a home run,” and promised to thwart any move by Democrats to prevent his appointment. – Rappler.com