The bleak future of undocumented migrant workers in ASEAN

Feb 13, 2017 11:00 AM PHT
Camille Elemia
Facebook Twitter Copy URL
Copied
PART 2: ASEAN countries view the issue of undocumented migrant workers differently. Singapore and Malaysia view it as a 'security threat' while the Philippines and Indonesia as a matter of 'human rights' 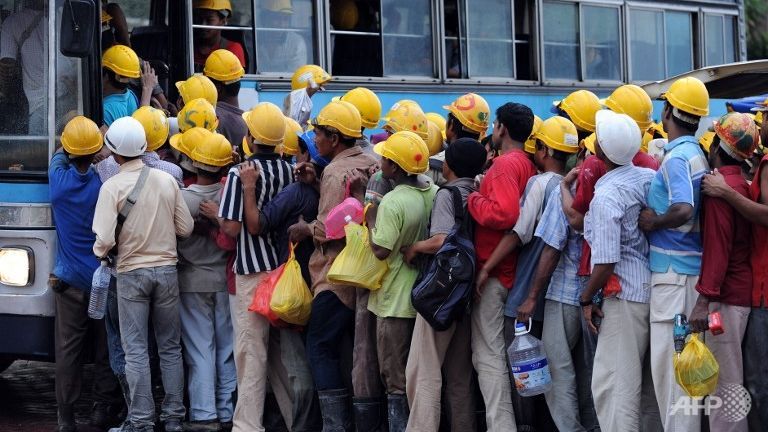 KUALA LUMPUR, Philippines (UPDATED) – Ten years ago, the 10-member Association of Southeast Asian Nations (ASEAN) signed the Declaration on the Protection and Promotion of the Rights of Migrant Workers.

Then as it is now, the plight of undocumented migrant workers remains in the backseat of ASEAN’s agenda.

It has consistently struggled with the protection of documented labor migrants. What more with the highly contentious issue of the millions of undocumented migrant workers in the region? Is there even a future waiting for them?

The draft instrument was stalled from December 2009 to 2011, when the Philippines and Indonesia proposed a legally binding framework to include undocumented migrants. Malaysia and Singapore, the top receiving countries, opposed it. (READ: Foreign workers less welcome in Singapore?)

The desire of the Philippines and Indonesia to include undocumented workers come as no surprise, as the 2 are the major sending nations in the region.

As of June 2015, data from Malaysia’s Ministry of Human Resources show there are 876,339 documented migrant workers from Indonesia – the highest from any other ASEAN member-state – and 66,521 from the Philippines.

Between the 2 sending states, it is Indonesia that has been solidly pushing for a legally binding instrument that includes protection for undocumented workers.

The Philippines, as host of the ASEAN in 2017, has said it is amenable to a non-legally binding instrument, as long as its parameters are followed.

What is stopping ASEAN from including undocumented workers, who, like their documented counterparts, contribute to the economies and societies of their host countries?

In 2015, ASEAN established the Asean Economic Community (AEC), which aims to have a freer flow of goods, services, investment, capital, and skilled labor in the region.

However, only 8 professions are covered – engineers, architects, doctors, nurses, lawyers and accountants. Migrant workers, more so undocumented ones, are excluded.

For Glorene Das, Tenaganita’s executive director, ASEAN seems to focus on businesses and investment climate that they tend to put the issue of migrant workers in the back seat. 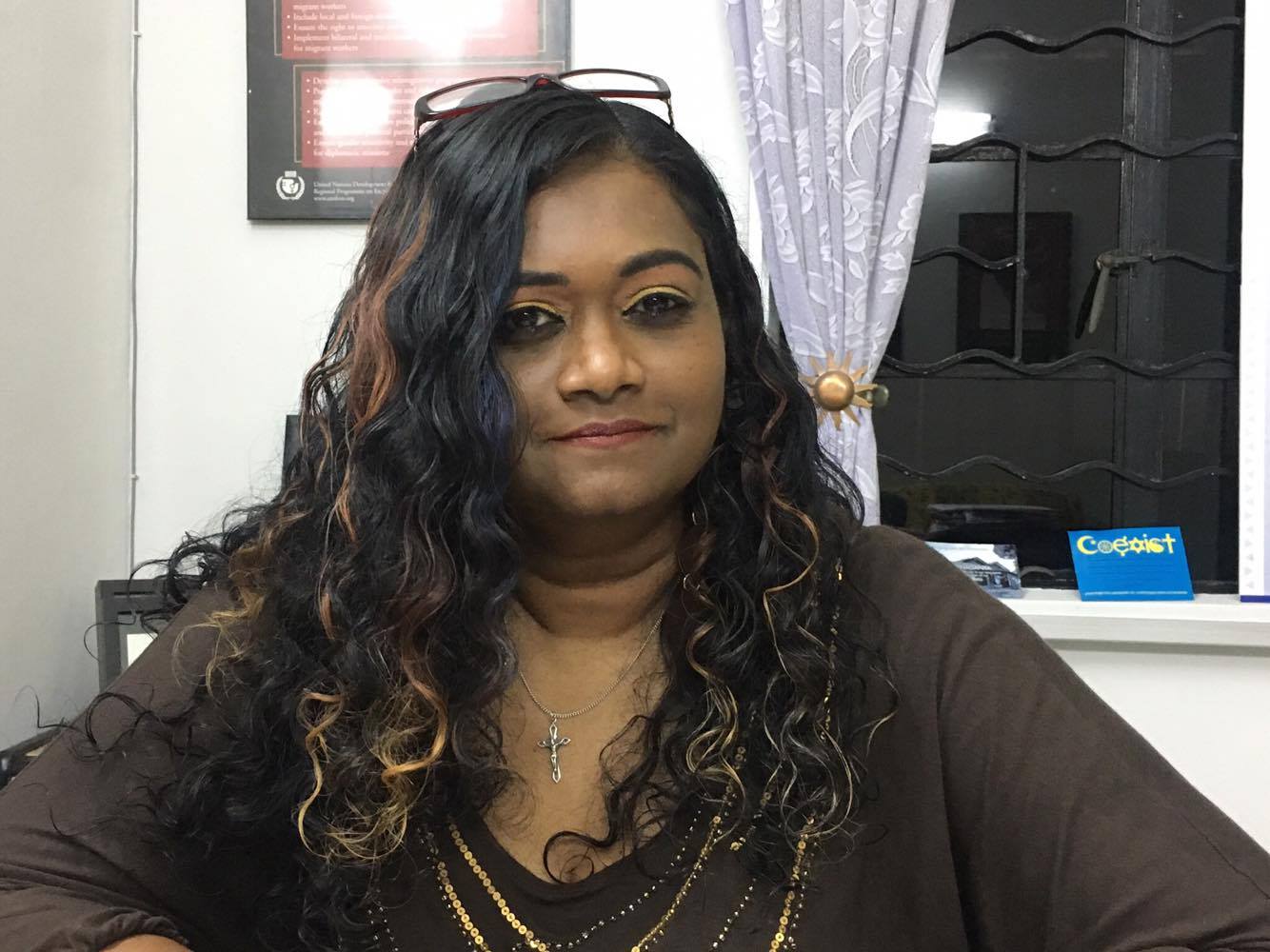 As for the contrast between professionals and not, she said undocumented and low- to unskilled migrant workers are easier to exploit than so-called “expats” or expatriates.

“I think in terms of expats there’s a certain accountability that’s needed from the state because of their level of education, work, expertise. And it’s not easy to exploit them. And there are legal redress mechanisms in place for them to puruse a case thoroughly,” Das said.

This was a sentiment shared by Aurora De Dios, member of the ASEAN Commission on the Promotion and Protection of the Rights of Women and Children (ACWC) that also deals with migrant workers.

“Papaano, sila ang pinaka-useful. (It’s because they are deemed the most useful.) Those highly educated and skilled are needed for their economic industries. Their priority is economic growth. They refuse to acknowledge that the job of domestic workers and other low-skilled workers is actual work,” De Dios said, citing the Employment Act of Malaysia that considered domestic work as part of the “informal” industry.

Leong Sze Hian, president of Singapore-based human rights NGO Maruah, said ASEAN member-states argue that it is easier to deal with this group, as dealing with undocumented workers might cause bigger problems with receiving states such as Malaysia and Singapore.

All the more complicated is the issue of undocumented workers’ families – many of whom, like Erika*, 37, have children growing up stateless in the region. 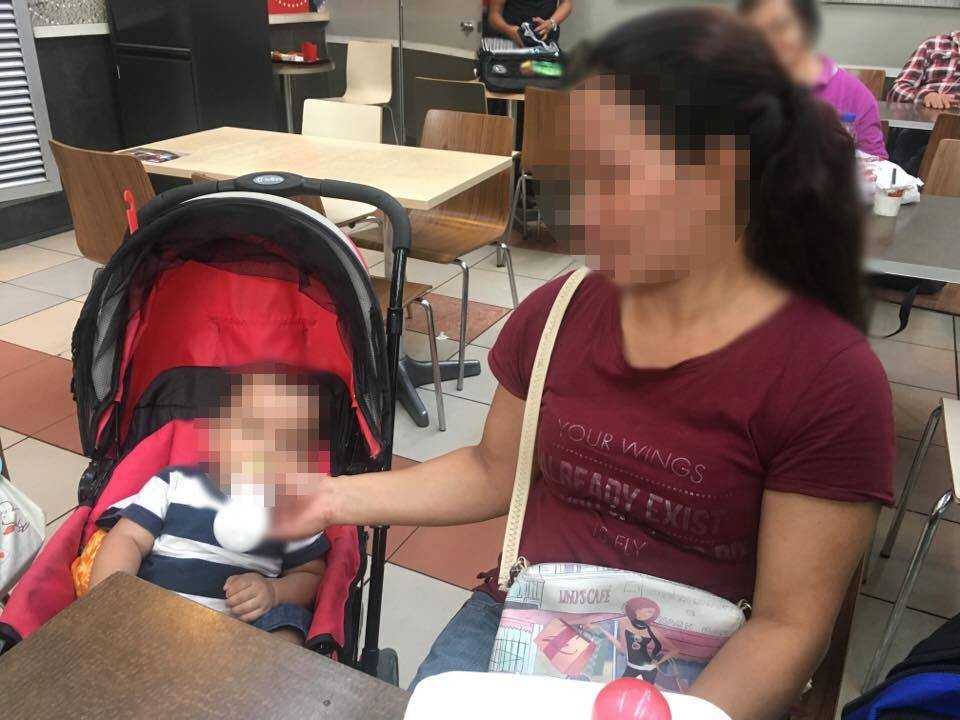 This is not to say, though, that the issue of irregular migration is completely ignored in the ASEAN. It has somewhat started to be tackled, but not as head-on as many would want.

Manuel Imson of the International Labor Organization and the project coordinator of the ASEAN Triangle Project on migrant workers said the issue of the Rohingyas in Myanmar has highlighted the issue in the region. (READ: Migrant crisis tests Southeast Asia diplomacy)

“The issue of irregular migration is a recognized issue within ASEAN of course. If you look at what has happened with the Rohingyas and all, the issue was enhanced. But formally, I think member states are still much focused on doing different issues on regular migrants, less of the undocumented workers,” Imson said.

Another problem, he said, is the lack of statistics on undocumented labor migrants, precisely because of the very nature of their situation. Each country, Imson said, has its own way of estimation.

Fear for national security vs protection of human rights

Since most undocumented laborers are low skilled to unskilled, they give life to the industries that provide so-called 3D jobs – dirty, dangerous, and demeaning jobs – which locals frown upon.

One of the stumbling blocks to ASEAN’s protection of undocumented worker is the conflicting views of sending and receiving states.

For sending countries, they believe it is a human rights issue, while receiving countries insist it is a national security matter.

Abdulkadir Jailani, former Indonesian negotiator in the ASEAN Committee on Migrant Workers, said the dichotomy is a product of conflicting interests among member-states.

“The divergence of policy is a result of the divergence of the interests among ASEAN countries. Technically speaking, the expansion of the scope of the protection, which include undocumented migrant workers, will create more practical burden for the receiving countries,” Jailani told Rappler. 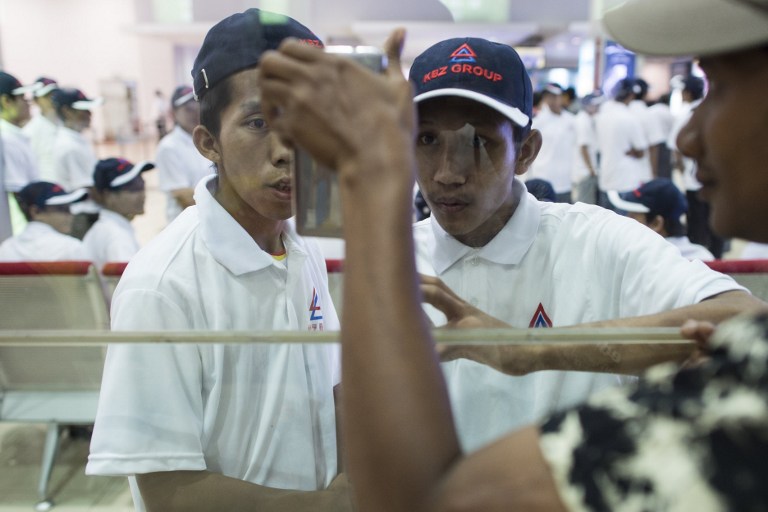 “Receiving countries perceive undocumented workers as a threat to national security, and as those who contravene the immigration laws and border control. Hence, policies to deal with migrant workers are very often dealt through the security lens rather than labor. [They] do not see migrant workers, let alone undocumented workers, as contributors to their GDP and economy,” said Ramachelvam, who is also the chair of the council’s Migrants, Refugess, and Immigration Affairs office. 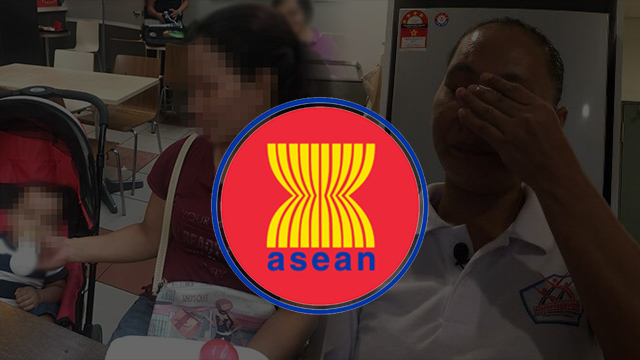 Part 2: The bleak future of undocumented migrant workers in ASEAN 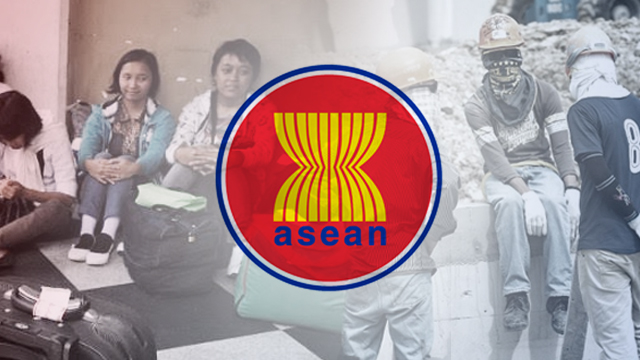 Part 3: ASEAN treaty on migrant workers: Can PH make it happen in 2017?

Receiving states view leniency as an invitation for more undocumented workers, leading to an uncontrollable flow into their territory.

Ibrahim Almuttaqi, head of the ASEAN Studies Program at The Habibie Center in Indonesia, said receiving states fear that such lenient policy would burden them.

The problem, he said, highlights the huge “income disparity” between member-states. Countries like the Philippines, Indonesia, and Cambodia are poor and have high unemployment rate while others such as Malaysia and Singapore are well-developed and has a demand for jobs.

But Das questioned the security issue, saying Malaysia, as a host country, even agreed to take these migrant workers in the first place. These workers, she added, became undocumented because of the lack of a comprehensive policy in the country

“If it’s real, why would they have them here in the first place? Then Malaysians should start doing their own work. You invite them because Malaysians don’t want to do the 3Ds. We need them that is why you invite them here. But you don’t have comprehensive policies, therefore they become undocumented in the process. And then you regard them now as threats to national security?” Das said.

With nearly 2 decades of engaging the government and ASEAN on the issue, Das said this is Malaysia’s usual response on it:

“So the only thing Malaysia will say is we’re not just getting everything. They’re sending money remittances from the money in Malaysia. As such, we are doing you a favor. It goes back to that mentality,” she said.

Rappler reached out to the Malaysian Ministry of Human Resources, Ministry of Home Affairs, as well as the ASEAN-Malaysia Secretariat but they all declined interview requests.

Jailani noted that receiving states worry of “legal and practical” burden at the national level should they become lenient to undocumented workers.

Politicians and leaders may face political backlash from their constituents should they agree with the sending countries.

The topic of labor migration has always been a “touchy, political issue,” said De Dios. 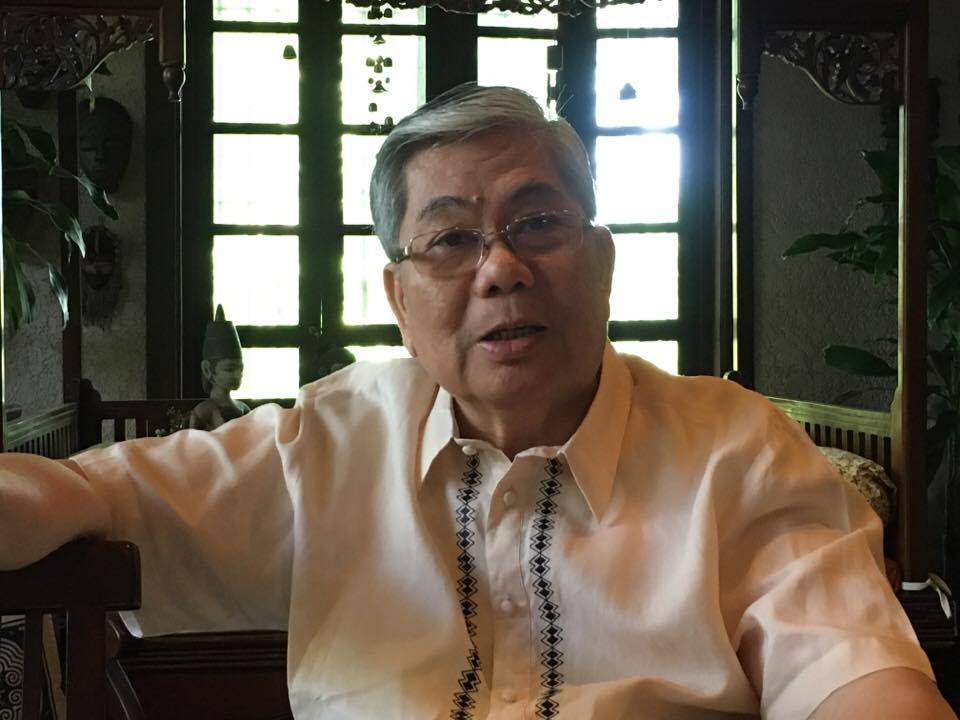 Former Ambassador Wilfrido Villacorta, Philippine Permanent Representaitve to the ASEAN from 2011-2012, said no country would want to be “flooded” with undocumented workers.

“No country would like to be flooded by foreign, unskilled or undocumented workers, because the locals feel they will be displaced. They will have revolution in their hands,” Villacorta said.

In Malaysia, with more than 2.2 million documented workers as of June 2015, migrant workers “are seen as outsiders and considered an invisible population” to the locals, said Ramachelvam.

“So politically, for any politician, they cannot be declaring open market for migrants, they will always only highly skilled even if they need househelp. The economic requirements of industry will be different from the political requirements in appeasing a population,” said Thetis Mangahas, former ILO deputy regional director.

She cited the case of Singapore, which faced backlash from its citizens for importing more foreign workers. 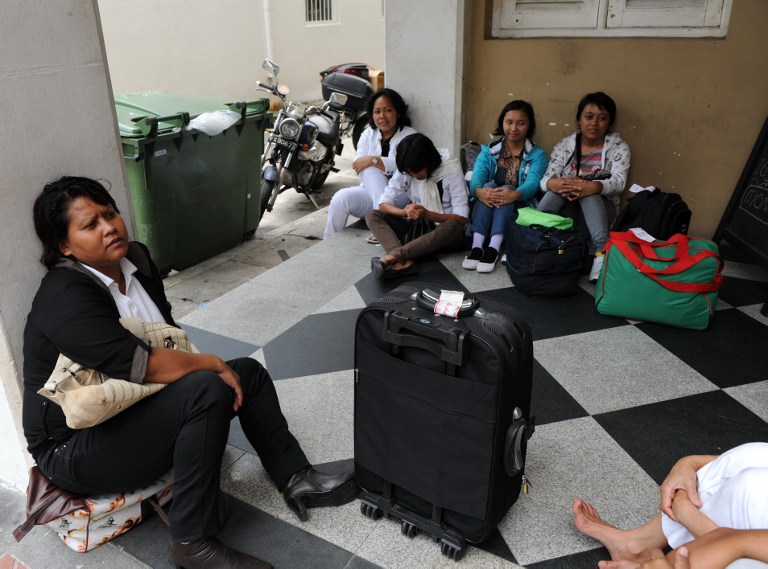 Since the 2011 elections where the ruling People’s Action Party lost the most seats since independence, the government cut foreign worker quotas even while admitting that it needs so-called foreign talents to support one of the world’s fastest aging populations. (READ: Fewer jobs for Pinoys, foreigners in Singapore)

Ten years since the ASEAN declaration on migrant workers’ rights was signed on Philippine soil, it remains to be seen how the nation, as host of the 50th year, would push for the rights of undocumented labor migrants, or if it will even raise it at all.

Hans Cacdac, administrator of the Philippines’ Overseas Workers Welfare Administration and negotiator for the past decade, was non-comittal on the inclusion of the workers in the pending instrument.

He said it is still one of the 3 main contentious issues the ACMW has to settle before April, the target release of the instrument. The other 2 are the legal nature of the document and the inclusion of families of migrant workers.

“The ASEAN declaration makes reference to undocumented workers who became undocumented to no fault of their own. So meron ng (there isa) reference in 2007 but beyond what it says, it’s a whole different thing. It’s a main bone of contention,” Cacdac said.

While he maintained the Philippines is still pushing for the group’s inclusion, Cacdac also recognized the need to respect other ASEAN member-states’ national immigration laws.

“Some member-states would even want it off the table. But us, we believe undocumented workers should be given proper protections under the law and should also be provided necessary forms of assistance by all member-states especially if they are victims of illegal trafficking or illegal recruitment,” he said.

But that is all there is to the future of undocumented workers in the region. It is as unclear as how ASEAN moved forward with the 2007 Declaration for 10 years now. – Rappler.com

Next: ASEAN treaty on migrant workers: Can PH make it happen in 2017?

This story was produced under the Reporting ASEAN program and media series implemented by Probe Media Foundation, supported by an ASEAN-Canada project, funded by the Government of Canada. It is also in partnership with AirAsia, and in collaboration with the ASEAN Foundation.